Jason Bourne (Matt Damon) returns for the third outing as the professional assassin who lost his memory when his conscience got the better of him. Having also lost the only person he cared for, and being pursued by fellow assassins, he tries to finally figure out his true identity and find out who was responsible for taking it away from him. Also with Joan Allen, Julia Stiles, David Strathairn and Paddy Considine. Directed by Paul Greengrass. [1:51]

SEX/NUDITY 3 - We see quick flashes of a man and a woman kissing passionately -- she is wearing a bra and her cleavage and bare shoulders are visible.
► A woman touches a man's hand tenderly.

VIOLENCE/GORE 6 - A man being followed by other people becomes frightened when he thinks that a maintenance person has a gun; when he runs into an open area he is shot in the head by a sniper (we see a spurt of blood and see him lying dead on the ground).
► A man being tested in a training session shoots another man who's seated in the corner of a room with a hood over his head and his hands bound.
► A bomb explodes as a car drives by (we see the shape of the driver's body in flames inside the car) and a man on the street lies unconscious (he has a bit of blood on his head).
► A man remembers trying to resuscitate a woman under water after a car crash, he tries to breathe air into her mouth, she dos not respond and he lets her float away dead.
► A man punches and kicks 4 men who have threatened him with guns (we hear moaning and crunching and see bodies lying motionless on the ground). A man punches and kicks two armed men, disarms them and holds a gun on a woman who walks into the room.
► A man being chased by another man with a gun jumps into a river, lands and then floats motionless, but then swims away.
► A man jumps from a building through an open window and onto in a neighboring building, then through a closed window, shattering it (he seems relatively unharmed), and he and another man fire guns and then fight with punches and kicks: one strikes the other with a candlestick, one swings a knife, a woman tries to stop them, she is punched by one of the men (she falls to the floor unconscious), and one is strangled with a towel wrapped around his throat (one also has a bloody nose).
► Several cars speed through city streets, they crash into each other and parked cars, guns are fired back and forth, and two cars crash together, flip over and land on their sides; one driver gets out with bloody scratches and the other appears to be trapped (he has a bloody head wound).
► A man is held at gunpoint, another man begins shooting, distracting the threatening gunman, and the first man steals a car and speeds away while being chased by other cars.
► A man walks with a bad limp as he runs away from police, he moans periodically and seems to have a bullet wound in his shoulder (he has blood on his hand); he is pursued into a train station and onto a train and he jumps out of the train as it pulls out of the station. A man with a bloody wound on his shoulder breaks into a clinic (he leaves blood on the door and handle) and injects himself with something.
► A man follows a woman into a crowd planning to kill her, she runs into a building and onto the roof, the man following her approaches and she jumps across and onto another rooftop.
► A man runs through a train station while being chased, he runs to a parking lot where he steals a car, he speeds away while being shot at, he accelerates the car off the roof of the parking garage, it crashes on the next level, and he runs away while being shot at.
► A man speeds on a moped being chased by another man on a motorcycle and police in cars, and they speed through streets, along sidewalks, up and down steps.
► A man with a hood over his head and his hands tied is plunged under water several times by two men. A man remembers being dunked under water, he collapses and seems to black out briefly.
► Two men with guns drawn walk through a room looking for a man, and they both shoot at a door thinking the man is behind it (he is not). Two men with guns grab a man and force him into a van.
► Two police officers hold guns on a man, he raises his hands and pulls a gun on them, punches one in the face and holds the other at gunpoint (no one is shot). Many armed police officers surround a building where a man is hiding.
► A man remembers having his head covered with a hood and taken away in shackles. There is the constant threat of a man being caught by people that are chasing him. We see a photograph of a man that we are told committed suicide.
► A man shoots an office door shattering the glass. A man builds a bomb that he intends to use to kill another man. A man causes an explosion as a diversion.
► Kill orders are given in several scenes. A man tells another man that people will kill him. A man tells a man that his sister was murdered. We hear that a woman was shot in the head and dumped in a river. A man says that he can see the faces of everyone he has ever killed. We hear a news report about a man's murder. We hear that a woman was killed.

SUBSTANCE USE - A woman has a glass of beer in front of her on a table (we do not see her drink).

MESSAGE - A government, or a government agency that's unchecked leads to excesses, and unscrupulous, as well as criminal behavior. 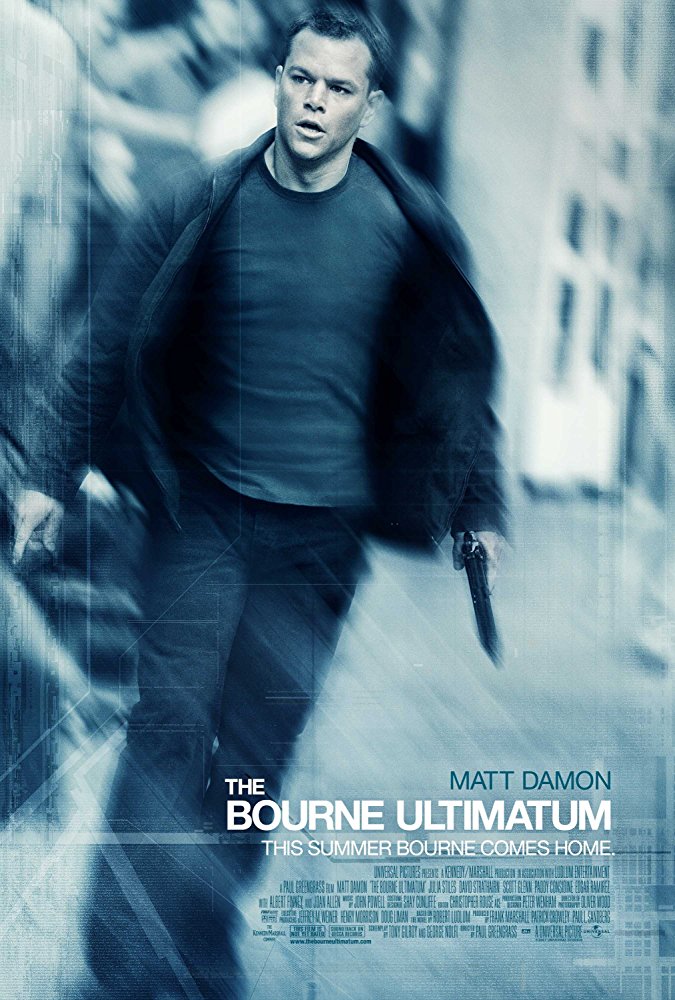