A young woman (Kate Bosworth) is training for the surfing Pipe Championship, while at the same time struggling with her memories of a near-drowning three years earlier, endeavoring to raise a rebellious younger sister since their mother has left them on their own, and trying to determine the long term intentions of a visitng NFL quarterback. Also with , Michelle Rodriguez, Matthew Davis, Mika Boorem and Sanoe Lake. [1:43]

SEX/NUDITY 3 - A young woman goes into a young man's hotel room, they kiss, he takes off her top and unties her bikini top, and they kiss again a couple of times. A young man and woman kiss in a hot tub and we see the young woman asleep in bed partly covered by a sheet later as the young man kisses her on the cheek. A young man and woman kiss and hug. Young men and woman dance close together in a bar scene. A young man flirts with a young woman as she changes her clothes by the side of a road (she removes her bathing suit from under her towel and shirt). A young woman wears a dress that is cut to her waist in the front revealing cleavage and bare abdomen. We see a young woman's bare back to the hips as she showers. Young men and women wear swim trunks (we see bare chests) and bikinis (we see bare abdomens, cleavage, and a bit of bare buttocks) throughout the movie. A man wears very tiny bikini trunks that barely cover his private parts, and he shakes and thrusts his hips. Young women take off their clothes (down to their underwear) and put on short, tight-fitting dresses. Other women wear short, tight-fitting dresses that expose cleavage, bare abdomens, bare thighs, shoulders and backs. A young man reaches into his pants to adjust his private parts. There are a few references to people being "hotties," young women talk about another young woman "peaking sexually," a young man says to a young woman "I'll give you the rest" (talking about money he owes her). We see a used condom that gets stuck to a young woman's shoe.

VIOLENCE/GORE 3 - Two young men fight, punching each other and yelling insults; one ends up with a bloody cheek and lip, and a young woman is shoved to the ground trying to break it up. We see many surfers fall from their boards while surfing large waves; one man emerges from the water with a bloody wound above his eye, a woman gets wiped out by a wave, is dragged under water and is put on a "back board" when she gets back to shore. A young woman falls off a wave, goes under, her ankle cord gets wrapped around a rock, she frees herself and gets to the surface and is then slammed by two more waves before she can get to the waiting rescue jet ski. A young woman falls off a wave, is dragged under and knocks into a reef. A young woman is wiped out by a large wave, struggles to get back to the surface, tries to get onto a waiting jet ski and she and the driver of the jet ski are dumped by another wave. A young woman surfs a wave, nearly hitting several young men and eventually she falls and her board is broken in half. A young woman and her younger sister fight with yelling and shoving. A young woman driving recklessly nearly hits another oncoming car. A young woman has repeated dreams and flashbacks about being dragged underwater and knocking her head on a rock (it is referred to as a near-drowning incident); we see the water crashing down on her, see her tumbling out of control and see and hear the crash on the rock. A young woman has her neck cracked by a chiropractor. We see a toilet full of feces, a floor with a puddle of vomit, a toilet smeared with vomit, and a used condom (it gets stuck to a young woman's shoe) and young women react with disgust. A young woman sits on a toilet. A couple of young men skateboard on a ramp and jump into the air. Several men fall off their surfboards during lessons.

SUBSTANCE USE - People drink alcohol and some drug paraphernalia is found.

MESSAGE - Don't ever give up on your dreams or you'll always wonder "what if." Girls can surf too. 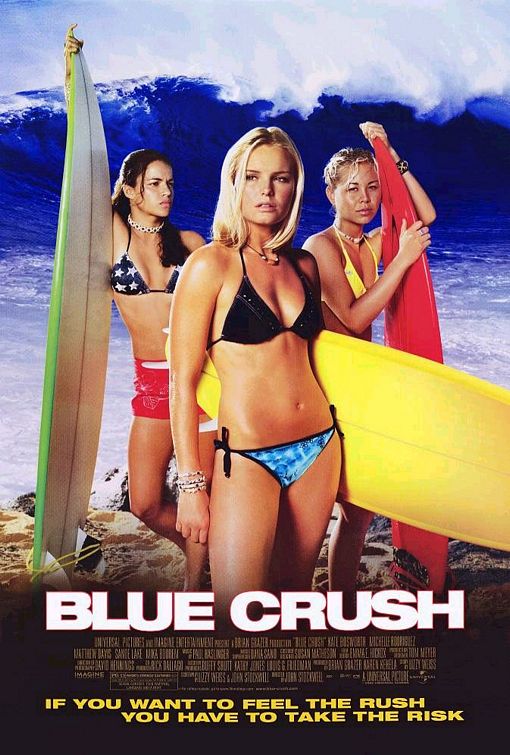