Several retired English men and women, including a newly widowed woman (Judi Dench), a couple (Bill Nighy and Penelope Wilton) that has lost its savings, a woman (Maggie Smith) with no family and no job and nervously awaiting a hip replacement, a judge (Tom Wilkinson) returning to his childhood home, a man (Ronald Pickup) looking for a new life and a new woman and a multiple divorcée (Celia Imrie) looking for a new husband travel to India to try out a ritzy new retirement hotel. When they arrive, they find it's not so ritzy. Also with Dev Patel, Tena Desae and Diana Hardcastle. Directed by John Madden. [2:04]

SEX/NUDITY 4 - A woman enters her boyfriend's dark hotel room, removes her bra and panties (we see them fall to the floor and we see her bare back), climbs into bed, screams and jumps up with a comforter around her, as we see that she is in the wrong room and an older woman is in the bed; the older woman says, "This is the most action I've had in a while," the woman's boyfriend enters the room and apologizes, his mother enters and accuses his girlfriend of prostitution and tells her to leave because the hotel is not a brothel, and the son and his girlfriend cry as the girl runs out of the hotel (she's clothed). Several couples kiss briefly.
► A man dances and sings in an open shower in a hotel; a woman on a nearby balcony looks over and sees his bare chest, back and buttocks briefly. An older Hindu priest, nude from the waist-up, pours ashes of a cremated body in a rive (we see his bare chest and back.
► An elderly man in speed dating sessions, on an airplane and in a hotel, flirts with younger women, smiling, winking and telling them he is 40 years younger than he really is; each woman walks away from him with a disgusted expression. A gay man tells his friends of his sexual orientation, how he had a short relationship with an Indian man 40 years ago and how public discovery of them caused the Indian family to lose their jobs and be shunned. Two men who discovered they were gay as teens see one another after 40 years and embrace; one is married and we hear that he said he is happy but has always loved the other man while the married man's wife stands by and looks sad. A woman pursues a man through much of the film, until he tells her he is gay; she says she is humiliated and walks out of the scene. A woman sets up a blind date between an older man and an older woman; they begin dating and we see each one of them reading the Kama Sutra sex manual at different times. An older woman asks another older woman, "How many husbands have you had?" and the second woman asks, "Including my own?" A woman tells her girlfriend that she swapped her date's Viagra for Aspirin and he "went all night," implying vigorous sex without drugs; we later hear the man describe the night as "reaching the top of the mountain." A woman says to a male desk clerk, "I had to flirt so hard at the travel agency, that it was almost phone sex"; he does not reply and she walks away. A woman tells another woman, "I'm afraid it's over for me, with men"; the other woman tells her to keep up hope and to have confidence (we see her on a date with a man later).

VIOLENCE/GORE 3 - A woman finds a man slumped to the side, dead in a chair and we hear that he had had a chronic heart condition and had returned home to India to die.
► We see a Hindu burial service and a man's body is shown on a bier slowly burning to ashes that a priest then pours the ashes into a river.
► We hear that a woman's husband of 40 years died, leaving huge debts behind and she cries. Many people shout at a woman who makes bigoted statements about blacks and Indians. A married couple argues with each other throughout the film about money, apartment options and the attractions of India where they have retired; she complains of dirt, fifth and squalor, and he shouts that she is selfish and insensitive. An elderly mother argues with her middle-aged son as to whether she can survive on her own and finally says she is going to try as she enters an airport to travel to a foreign country. A man argues several times with his middle-aged mother about money, redecorating his hotel, selling it against his will and an arranged marriage he does not want. A woman shouts at children playing with her wheelchair while she visits in a house, but soon apologizes. A woman complains about food, shouting, "I'll have a ham, cheese and streptococcus or a bacteria, lettuce and tomato."
► Seven English tourists contract diarrhea from Indian food and we seem them entering and leaving bathrooms repeatedly. A woman covers her nose and mouth with a handkerchief in many scenes. A man falls off a chair in a hotel dining room and the manager says he is dead, covering his face with a cloth; the "dead" man coughs and rises, saying that he fell asleep. We see a woman in a hospital where she receives an artificial hip and physical therapy; she shouts and complains several times.

SUBSTANCE USE - A woman tells a friend that her date brought Viagra to her apartment and that she swapped the pills for aspirin without him noticing, a man enters a doctor's office for "vigor" pills and the next day we hear him say that they worked, a man says he was taken to the wrong hotel where the proprietors gave him marijuana that he smoked and then left, and a woman and a woman agree that they remembered marijuana from college. A large company meeting shows dozens of men drinking beer, several dinner scenes in a hotel feature glasses of wine on tables and drunk by men and women, a large bar in a private club is shown in a few scenes and we see men and women drinking wine, and men and women drink wine on a balcony.

MESSAGE - The senior years are the beginning of new adventures. 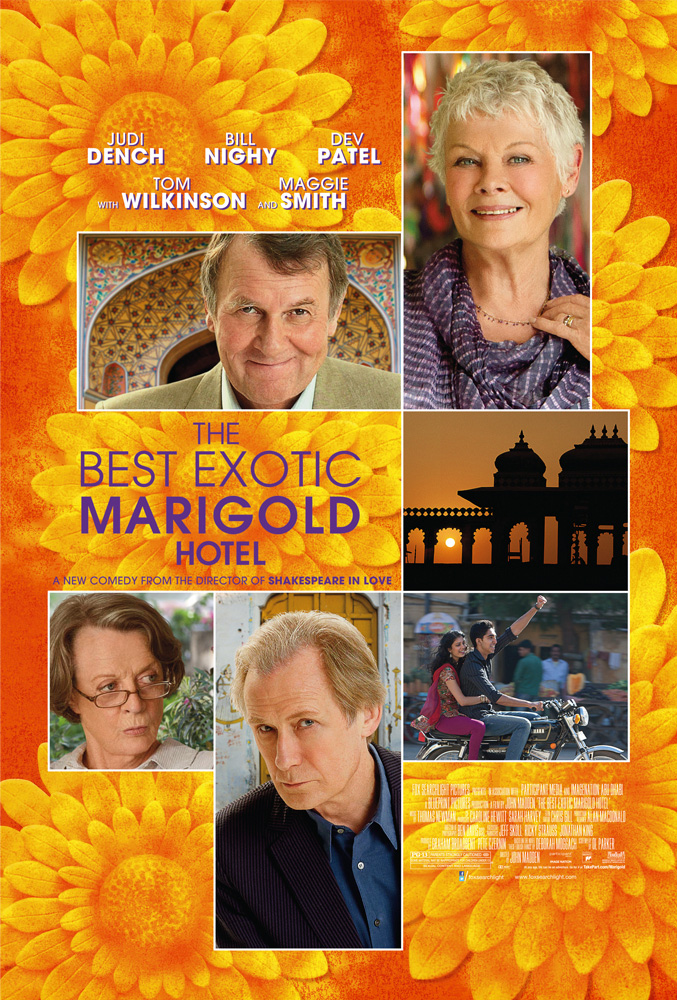