A man (Jason Statham) struggling to pay back a debt to shady characters is convinced by a longtime friend (Saffron Burrows) to rob a bank with her. The plan seems foolproof, until ulterior motives begin to surface and they have to think fast to save their lives. Also with Stephen Campbell Moore, Daniel Mays, James Faulkner, Alki David, Michael Jibson, Richard Lintern and David Suchet. Directed by Roger Donaldson. [1:50]

SEX/NUDITY 8 - We see a sex scene between two women and a man, and we see one woman's nude bare breasts and abdomen: one woman lies on her back on a bed, we see the other woman's head between her legs (performing oral sex), the woman moans, and we see a hand caressing her breast.
► A man and a woman go into a small room, she removes her panties and dress and he removes his shirt (we see her bare breast, hip and abdomen and his bare back); she then wraps her legs around his waist and they have sex (the scene ends here).
► We see a few scenes from a pornographic movie: a man sits in a bed and two topless women (bare breasts are visible) rub their breasts on his face, they remove his pants and make a remark about his size (we do not see anything).
► We see a man, bare-chested and wearing women's panties, being strapped into a wooden frame that binds his hands; a woman dressed in leather begins to whip him on the back (he tells her to whip him harder).
► We see photographs of people having sex in several scenes (women's bare breasts are visible, as well as men's bare chests).
► Scantily clad women parade through rooms in a brothel while men look at them: many are bare breasted, some wear only garter belts exposing their pubic region, and others wear thongs that reveal bare buttocks. We see scantily clad woman dancing at a strip club (they wear thongs that reveal bare buttocks and bare breasts, with nipples covered by pasties); one dancer gyrates while standing over a man who lies on a table and another man pours alcohol on her. A nude woman in bed with a nude man gets out of bed (her bare back, buttocks and the side of her breast are visible, as well as his bare chest and abdomen). A woman, covered with sheets to the shoulders, lies in bed with a sleeping man (his bare chest is visible). We see a woman swimming in the sea wearing only swimsuit bottoms (her bare breasts are visible) and a man grabs at the bottoms trying to pull them off. A woman is searched at an airport by security and we see her in her bra and panties. Two women wear very low-cut tops that reveal deep cleavage. A woman wears a dress that reveals bare shoulders and back. A woman wears a low-cut dress that reveals cleavage.
► A married man and a woman kiss as they go into her apartment and it is implied that they have a sexual relationship. A married man and woman kiss and it is implied that they have sex. A husband and wife kiss. Two women kiss a man on the cheeks.
► A woman talks about a passionate affair. A man talks about acting in pornographic movies and another man makes a remark about the size of his genitals. A man talks about self-gratification in order to keep the circulation going when cold. A man asks a married man about a sexual relationship he is having. We hear that a man is a pimp. A man talks about police officers that come into his strip club expecting "free oral sex." A man tells a woman, "You're still a knockout." Two men tease each other about the size of their genitals.
► Men and women dance together at a wedding reception.

VIOLENCE/GORE 8 - A man in a car is grabbed by another man who's in the backseat; the man puts a cord around his throat and another man puts a plastic bag over his face, the man struggles to get away, the scene ends and we understand that the man has been killed.
► A woman is shoved into an open grave and then slashed by a man with a machete (we hear the slash and the scene ends). A man is grabbed from behind and stabbed in the neck (we hear a crunch and he falls to the floor dead).
► A man shoots a man in the head: we hear the gunshot and another man screams, "He shot him, he's dead."
► A man demonstrates what a device can do by pointing it at a wall and causing the paint to peel off; he then holds it to a man's ankle, we see blood coming through his sock (it apparently blows air that peels the man's skin off), the man screams, and we see the man moaning on the floor later with blood on his foot and pant leg.
► A man punches a man hard in the stomach, trips him, then kicks him repeatedly while he lies on the ground, and he then punches another man in the face; he is shot at by yet another man, but he throws a brick striking him in the head and then head butts him repeatedly.
► We see a man's very bloody face after he has been beaten. We see a dead body partly covered with dirt and lying in a hole in the ground.
► A man falls through a hole in the floor, and lands hard inside an underground chamber where many human skeletons are piled.
► A man puts a heavy slave collar around another man's neck and leads him around with a chain. A man twists a man's arm behind his back and pushes him, forcing him to walk.
► A wife confronts her husband as to whether he had sex with another woman; she yells at him, punches him on the chest and slaps him in the face.
► We see a man bare-chested and wearing women's panties being strapped into a wooden frame that binds his hands and a woman dressed in leather begins to whip him on the back (he tells her to whip him harder).
► Military vehicles crash through a fence and speed to a man's home where officers hold him at gunpoint and arrest him. A man is arrested for transporting illegal drugs.
► Two men with tire irons break a car windshield, dent the hood of another car and then break a car window while threatening the owner of the cars. A car swerves in front of a van nearly causing an accident. A man's home is set on fire.
► A man yells at another man over the phone and threatens him. A man complains about the pain caused by a kidney stone. We hear that a man was hanged in Trinidad for murder. A man and a woman talk about robbing a bank.
► People are nervous when police enter a bank, which they are robbing, and they hear them outside the vault door.
► A man spears a fish.

SUBSTANCE USE - People are shown drinking alcohol in several club and pub scenes, people are shown drinking alcohol at a strip club and several appear to be drunk, several people drink champagne from bottles, a man drinks a beer in a pub, and people drink alcohol and smoke cigarettes at a dinner. A woman smokes a cigarette in a club scene and a man smokes a cigar. Packets of drugs are discovered in a woman's suitcase at an airport. A man takes prescription pain medication for a kidney stone.

MESSAGE - There are no such things as foolproof crimes. 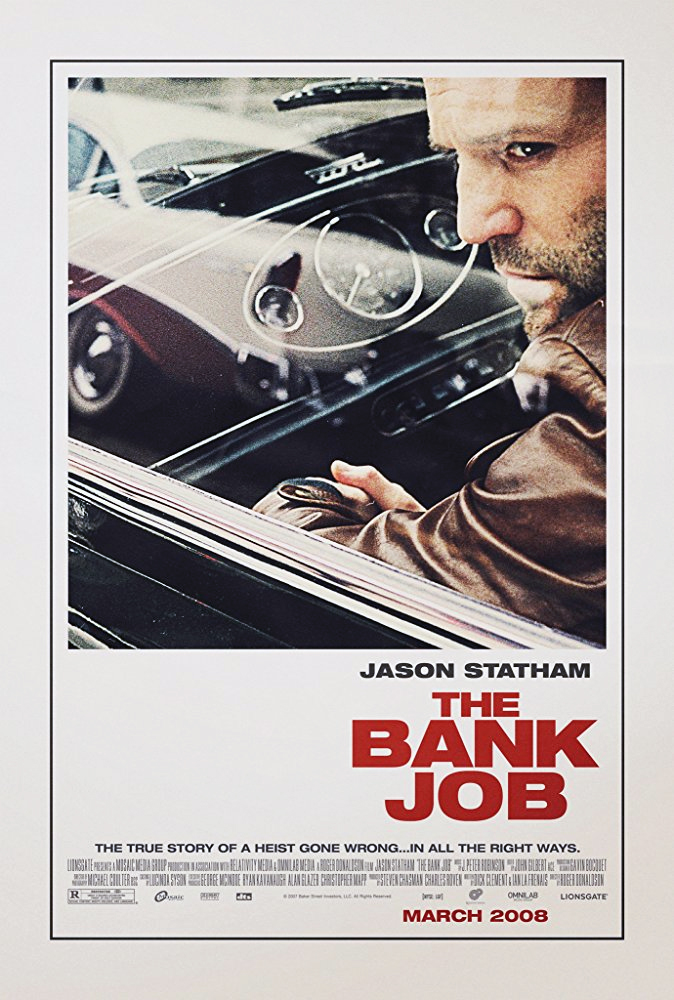