A grifter and his partner (Billy Bob Thornton and Tony Cox) meet every Christmas season to case department stores while dressed as Santa and his lead elf. Between seasons the Santa spends his time in a drunken stupor, bitter and angry and anything but the way we normally imagine Santa to be. But an introverted boy (Brett Kelly) approaches him one day and changes his life by showing him what the spirit of being Santa is all about. Also with Lauren Graham, John Ritter and Bernie Mac. Directed by Terry Zwigoff. Please note that this is a review of the R-rated theatrical cut and not of the unrated video version titled "Badder Santa." [1:33]

SEX/NUDITY 6 - A man and a woman have sex in a car (we see her sitting on his lap bouncing rhythmically). A man and a woman have sex in a hot tub (we see their bare shoulders bobbing rhythmically and see the water splashing). We hear moaning and see bare legs thrusting under a fitting room door. A woman lies on the floor wearing a bra and a man kisses and licks her bare abdomen and chest and bites her panties (the man is bare-chested). A man admires a woman's buttocks, touches her, begins to unzip her skirt and they kiss. A man and a woman kiss. A man kisses the breast of a mannequin. Men talk about a man having had sex with a woman in a department store fitting room. Men make references to anal sex. A man tells a boy "I loved a woman who wasn't clean," and a man talks about having been caught with a woman's sister. A man puts his hand in a boy's pants to retrieve a stolen item, a man admires a woman's buttocks as she walks by him, and a man watches women wearing bikinis and playing sand volleyball. A woman wears a low-cut top that reveals cleavage, and a woman wears a short top and low-cut pants that reveal bare abdomen and cleavage. A man lies in a bathtub and we see bare shoulders and legs and a boy sits in the room with him (nothing sexual). We see men and women in swimsuits on a beach.

VIOLENCE/GORE 5 - A man is pinched between two cars and we hear him yell and we hear that he is dead. Many police officers draw their weapons, they fire at a man, the man drives off, the police chase him, the man runs on foot, is shot many times in the back and falls to the ground (children are watching from a nearby window and they scream). A man holds a gun on a man, and a man punches a boy several times. A man punches another man and throws him over a bar, and a man slaps another man a few times. A boy kicks a man in the crotch, a man punches a boy in the crotch, and a man punches a man in the crotch. A boy teases another boy, who kicks him in the crotch. A man shoves a man, pushes him against a car and begins to pull his pants down (presumably to rape him although he is stopped). A boy cuts his hand; we see the wound covered with blood as he runs screaming. Bullies tease a boy, throw a can at him (he's hit in the head but is not injured) and call him names, and bullies give a boy a wedgie. A man throws an alarm clock and several bottles at a wall in anger, and a man throws a bottle into a car windshield breaking it and setting off the car alarm. A man yells at a boy and throws checkers and a board across a room. A man yells at a woman and a boy. A woman appears dead and startles a man when she sits up. Men threaten each other with violence in several scenes. A man in a drunken stupor stumbles off an escalator, falls into a store display, kicks and punches some of the display props and collapses. We see a stuffed animal with blood on it. A man hacks at a mannequin's leg with a golf club. A man passes out and falls on the floor. A man is rude and insulting to children. A man talks about having had his eye socket punched out. A man talks about his father having beaten him when he was young, a man talks about his father having put cigarettes out on his neck when he was a boy. A man slides down an air vent and crashes onto a table. A man talks about having been in prison. A man flinches and yells when a pedicurist pokes his toe. A man urinates in his pants (we see a trickle running from under the chair he is sitting on and see his pants becoming wet). A man vomits (we see goo and hear him lurching). A man drinks from a beer bottle with a cigarette butt floating in it. A boy has mucus on his face in a few scenes. A boy sneezes on a man's face and sprays him with saliva and chocolate.

SUBSTANCE USE - People smoke ceaselessly and drink alcohol non-stop to the point of perpetual inebriation.

MESSAGE - Stand up for yourself. The real spirit of Santa is in all of us. 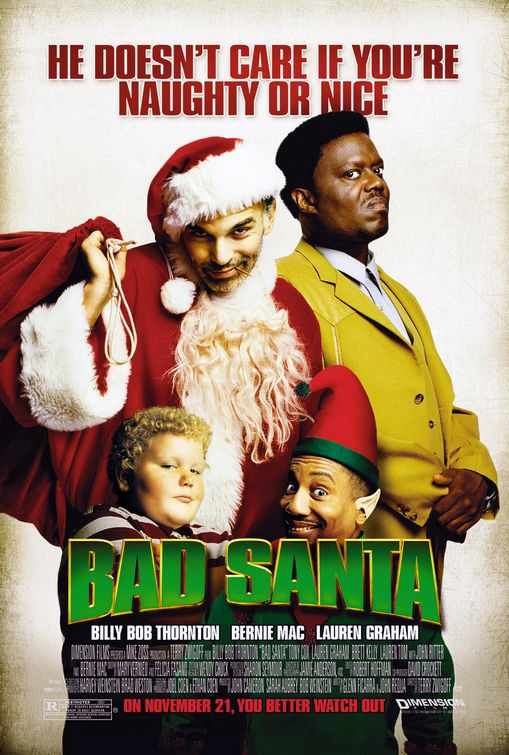