Billy Bob Thornton stars as Morris Buttermaker a former big league pitcher who accepts a paid assignment to coach the Bears, a team that's notorious for having lost more games than any other team in Little League history. But the coach (Greg Kinnear) of the champion team will not stand for a low-life, drunkard dirtying up his pristine league, which is exactly the inspiration the Bears coach needs to make something of his clumsy players. Also with Marcia Gay Harden, Timmy Deters and Sammi Kane Kraft. Directed by Richard Linklater. [1:51]

SEX/NUDITY 5 - A woman tells a man that she is attracted to him, and she acts aroused (she is breathing erratically and caresses her chest, etc.); we later see him walking out of her bedroom with his shoes in his hand and his shirt untucked, implying that they have had sex.
► Scantily clad women sit on the bleachers and cheer for a team at every game (their outfits reveal cleavage and bare abdomens and bare thighs and when they cheer they wiggle and thrust their hips and pat their buttocks). We see servers at a Hooters restaurant wearing tiny shorts and tight, low-cut tops that reveal cleavage and bare thighs in several scenes. A man walks into a restaurant with a scantily clad woman on his arm; we see her ample cleavage, bare abdomen and thighs. Boys admire scantily clad servers in a restaurant and one asks, "What time do you get off?" A man's pants slip down revealing part of his buttock cleavage.
► A girl makes a crude remark about the size of her father's endowment. There are a couple of crude remarks made about sexually transmitted diseases. People make comments about a man's shorts being tight enough to expose his genitalia. A man passes out athletic supporters to boys who make crude remarks about their genitals. A boy yells at a man and tells him that he will accuse him of touching the boy's private parts. A man grabs and squeezes his crotch a couple of times as a signal to baseball players. A man admires a woman playing baseball and remarks about a part of her anatomy.
► A girl kisses a boy. A boy and a girl ride on a dirt bike together, and the girl has her arms wrapped around the boy's waist.
► A man says, "I haven't paid for sex in a long time." A man talks about, "kissing your sister," and "kissing a really hot step-sister." A girl tells her father that she has started her menstrual cycle. A man walking out of a woman's bedroom is confronted by the woman's son who asks what the man was doing there (he makes up a reason).
► A Little League team sponsor is "Bo-Peeps Gentleman's Club" and the logo includes a silhouette of a woman.

VIOLENCE/GORE 4 - A man knocks the hat off a boy, yells at him and shoves him to the ground. A man yells at a boy, grabs him by the arm and shoves him. A man pitches baseballs at boys hitting every one of them on the leg, head, or arm. A boy jumps a dirt bike over a fence and onto a baseball field interrupting a game, and a man on the field runs after him and yells.
► Two boys shove another boy into a Porta-Potty, and then tip it back and forth; another boy jumps on the two and hits them, he is knocked to the ground, carried to a field and thrown into a puddle of mud. A girl is knocked to the ground, and a boy punches another boy in the face.
► Two teams converge on the field, shoving and punching each other, and then the two coaches lunge at each other (they are held back by other men). Two boys hit and shove each other in many scenes. A boy grabs another boy as he runs past him on the baseball field, he falls on the ground, holds onto his legs then throws his mitt at him.
► A boy has a black eye and a bloody lip and we hear that he had a fight with the sixth grade. A boy runs into another boy on the baseball field knocking him down. A boy throws a baseball that hits the windshield of a car, breaking it.
► A man yells at an umpire, and spits on the ground. A boy throws his mitt in anger in many scenes. A boy yells at a man and throws his mitt. People shove each other on a dance floor (a man thinks they are trying to start a fight, so he pushes back), and a man is picked up and passed along the top of the crowd.
► A man dumps a dead raccoon and several dead rats out of a cooler and into a dumpster, and then fills the cooler with ice and beer. A boy carries two dead rats in traps. A boy creeps into a crawl space under a house, pulls the pin on an extermination bomb (we see rats scampering around), the bomb gives off a pink smoke, and the boy coughs and backs out of the space. A woman screams and climbs on a counter top when many rats come out of her basement.
► Boys talks about having been "de-pantsed." Boys and a girl spray each other with beer (non-alcoholic). Boys fling food at each other in a restaurant. A man passes out from drinking too much beer. Two boys spray each other with bug spray. A boy says that he has cancer of the eye (he does not actually).

SUBSTANCE USE - A man drinks beer and smokes cigars in almost every scene that he is in. A man mixes alcohol and beer in a beer can and drinks it, a man drinks martinis (and a boy mixes them for him) and people drink wine in a restaurant. A man talks about "always being drunk" and not remembering things, and a man passes out non-alcoholic beers to children. People smoke cigarettes in the background of a few scenes.

MESSAGE - Winning is not always what expended effort should be about.

(Note: Boys make sexist remarks about a girl pitching on their team.) 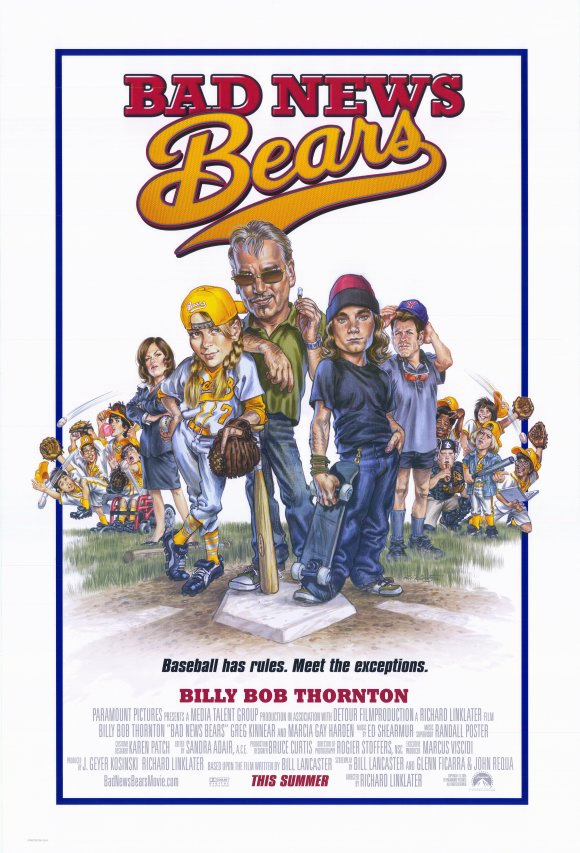