An intricately woven tale of the inadvertent connections between people from around the world whose lives have been affected by one gun. It all starts with a rifle shot in the remote sands of the Moroccan desert, which starts a chain of events linking an American couple, two Moroccan boys, a nanny illegally crossing into Mexico with the two young children in her charge and a Japanese teen. With Brad Pitt, Cate Blanchett, Gael Garcia Bernal, Elle Fanning and Koji Yakusho. Directed by Alejandro Gonzalez Inarritu. [2:22]

SEX/NUDITY 8 - A teen (she seems to be 15 or 16) sitting in a dentist's chair, licks the dentist's face twice while he examines her teeth; then grabs his hand and pushes it into her crotch (he pulls away and makes her leave).
► A boy pulls down his pants and masturbates: we see his bare thighs and his underpants, his arm moves rhythmically and we see his facial expression.
► A teen (15 or 16-years-old) walks into a room fully nude (her bare breasts and pubic region are clearly visible) and stands in front of a man; she then puts his hand on her breast and caresses his face (he pulls away). A teen (15 or 16-years-old) removes a man's coat and we see her bare breasts briefly.
► A teen (15 or 16-years-old) takes off her panties and exposes her crotch to a table of young men in a club (we see her crotch also) and the young men ogle her. Two young women lift their skirts to show each other that they are not wearing panties (there is a very brief glimpse of their pubic regions).
► A boy watches his older sister undress (we see her bare back and shoulders) and she smiles at him. A young woman stands nude on a balcony (we see her bare back and buttocks. Prostitutes wearing skimpy clothing (cleavage, bare abdomens and bare thighs are visible) stand alongside a street. We see young women dressing in a locker room, and two young women are in bras and panties. A young woman changes her clothes (we see her in her bra).
► A teen (15 or 16-years-old) holds a man's hand, presses it against her face and puts one of his fingers in her mouth.
► A young man and a young woman kiss while dancing, and a man and a woman kiss in a few scenes.
► Young men and young women dance together in a club, and several young women flirt with several young men. A man and a woman hold hands.
► We see a statue of a nude woman with its breasts and pubic region visible, and we see mannequins in sheer bras and panties in a storefront.

VIOLENCE/GORE 7 - A woman is shot in the neck through a bus window (we see blood spurt and then pour from the wound), and she is then stretched out on the floor of the bus (we see blood pool under her).
► Police shoot at a man and two boys who run along a mountainside; one boy is struck in the leg, then shot and killed, and a boy shoots a police officer.
► A man twists the neck of a chicken and pulls its head off while children watch (blood spurts from the neck and the chicken flaps its wings).
► We see a bloody bullet wound in a woman's neck, and a man identified as a doctor sterilizes a needle by passing it over a flame, and stitches the wound closed while two people hold the woman down (she pleads, screams and thrashes).
► A police officer holds a gun to a man's head, forces him to the ground, and punches and kicks him (the man has a bloody and bruised face later and a woman also has a bruised face although we do not see her being beaten).
► We see a woman on a stretcher with a very bloody shirt.
► A man slaps a boy in the face, pulls the hair of another and slaps a girl in the face (they are his children). A man pushes a man to the ground and attacks him, while other men pull him off.
► A boy shoots a rifle at a bus, the bus stops and we hear screaming from the passengers. Two boys practice shooting a rifle and their father tells them to go kill jackals with it. A man shoots a gun in the air at a celebration.
► Two boys push each other to the ground, wrestle and argue.
► A woman leaves two children in the desert alone and goes for help. A woman and two children are left in a desert in the middle of the night, and they stumble along trying to find their way to a road.
► A car is stopped and searched at the Mexico/U.S. border crossing: an officer un-straps his gun and tells the driver to move his car while they continue the search and questioning; the driver speeds away hitting another car and then racing down the road, while police officers follow.
► A police officer threatens to cut a part of a boy's anatomy off. Young men in a club tease young women who are hearing impaired. A man and his teenage daughter argue and appear estranged.
► A young girl talks about being afraid of dying like her baby brother. We hear that a woman killed herself by shooting herself in the head and that her daughter was the first to find her. We hear that a woman killed herself by jumping off a roof. We hear that a woman died from a gunshot wound. It is implied that a husband and wife have become estranged because of guilt and blame over the death of their infant son.
► A man driving a car (with a woman and two children as passengers) begins to fall asleep and swerves off the road; he wakes up before losing control. A man sells a gun to another man.
► Many people from a tour bus are angry and agitated when the bus stops in a remote village to try to help a wounded passenger.
► A boy hangs up a fresh animal pelt and flies buzz around it. A husband helps his injured wife over a pot so that she can urinate (we hear the trickle).

MESSAGE - Guns can touch many people's lives in a profoundly negative way. 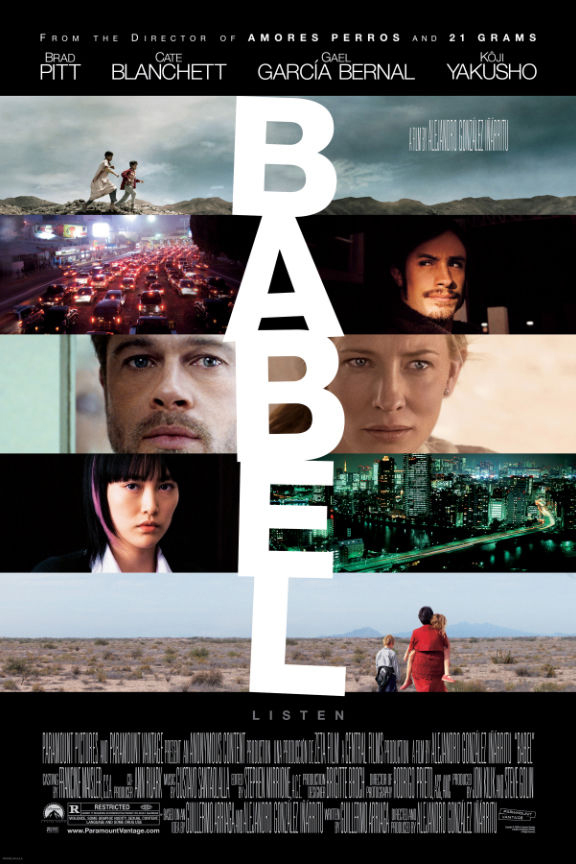