Three co-workers (Alice Eve, Josh Peck and Brian Geraghty) leave an office Christmas party and make a stop at an ATM booth on their way home. They soon find themselves trapped inside when a menacing man stands guard in the parking lot with apparently violent intent. Also with Aaron Hughes, Omar Khan and Will Woytowich. Directed by David Brooks. [1:30]

SEX/NUDITY 1 - A man and a woman talk and flirt awkwardly. A man tells another man "You better cross your legs, I can see your vagina."

VIOLENCE/GORE 7 - A man runs through a dark parking lot, he is clotheslined by a fishing line and falls to the ground where he lies moaning and seems unable to right himself; another man kneels next to him and slams a screw driver into his abdomen, then pushes it in farther (we hear a crunch and the victim grunts) and the man is motionless. A security guard gets out of his car, investigates another car in an empty parking lot, and approaches an ATM booth calling to the people inside until he is bludgeoned to death by a man with a tire iron (we see blood pool on the ground around his head). A man approaches another man in a parking lot, he punches him, and then slams his head on the pavement until we hear a crunch and a splatter and the man lies dead.
► Three men fight with several punches and kicks until one man is suffocated by another man holding a chain across his throat (we see blood on his mouth and nose). A man runs to his car while being chased by another man, he gets in the car, the other man breaks the window, pulls him out of the car, they struggle, and he climbs back into the car and out the other side and runs back to an ATM booth (he is unharmed). A man throws a flaming Molotov cocktail at another man sitting in a chair and we see him engulfed in flames.
► A woman falls and slams her head on a desk (we see her floating motionless in a water-filled booth and it is implied that she is dead). A wounded man has a seizure, blood spurts from his wound and a woman screams while another man tries to help him.
► A man and a woman help a wounded man into an ATM booth where we see a lot of blood on an abdominal wound and a screwdriver sticking out of the wound (they press on the wound and cover it with papers trying to stop the bleeding). We see police at a crime scene; a body enclosed in a body bag is loaded onto a gurney, another body is shown face down with a pool of blood on the ground around the head and another body is shown in the distance and covered by a tarp (no blood is visible). A man is sprayed in the face with pepper spray and he thrashes and screams. A man yells and protests as he is handcuffed and arrested by police.
► Two men and a woman are trapped inside an ATM booth and the power is cut off causing the temperature to drop dramatically (it is frigid outside). Frigid water floods into an ATM where two men and a woman are trapped and a dead body floats in the water. Two men and a woman stand inside an ATM booth and see another man in a parka and ski mask outside, watching them.
► A car is driven through the front of an ATM booth shattering the glass door and walls. A man spills his drink and seems inebriated.
► A dog returns to its human companion, who is dead on the ground; the dog barks, nudges the body and whimpers before running away.
► Two men and a woman argue about what is happening. Two men argue, insult and shove each other. A man says, "I don't read."

SUBSTANCE USE - A man says, "I'm gonna go smoke a joint in the break room," and a man says, "Jerry is on drugs again." People in an office party setting are shown drinking alcohol, a man says that "Tequila is a super food," a man drinks alcohol from a bottle, and a man spills his drink and seems inebriated.

MESSAGE - Life is all about choices. 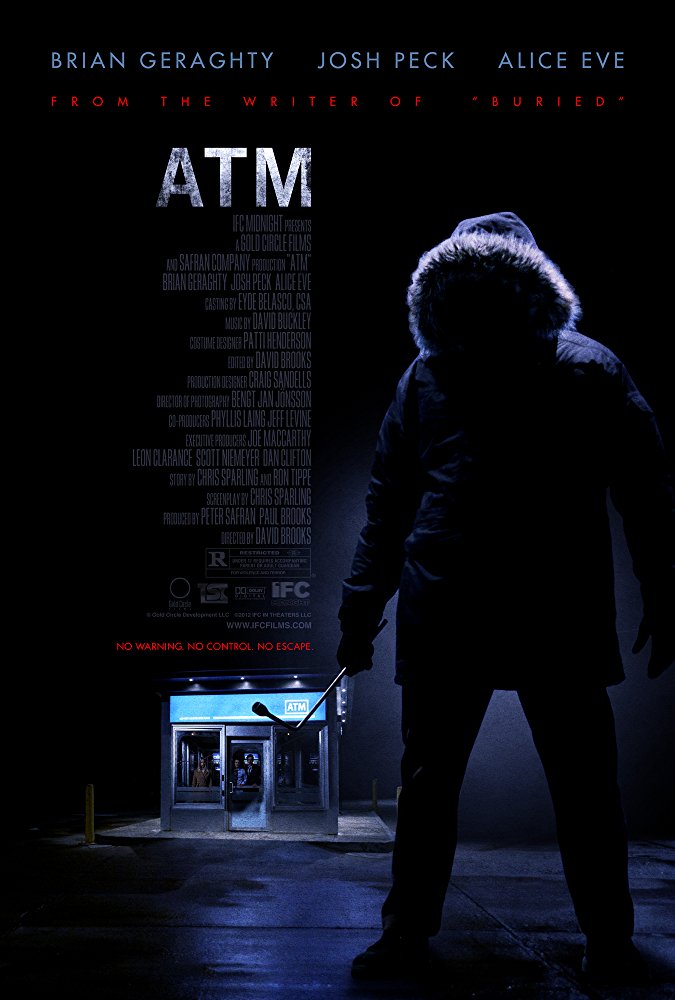