The relationship of a workaholic farmer and his son (Dennis Quaid and Zac Efron) is strained as the family's farm comes under threat: The agribusiness trend of using only patented seeds may put the family out of business, as well as lead to intrigue, mayhem and death. Also with Kim Dickens, Heather Graham, Clancy Brown, Maika Monroe and Red West. Directed by Ramin Bahrani. [1.45]

SEX/NUDITY 6 - A woman goes to the garage where a young man works on his car, they walk into a grain silo next door and have sex: he backs her face and chest into a silo wall, reaches under her short denim skirt (we see full thighs) and removes her panties, he pushes his body against hers in a close-up and a longer shot, and she walks away, falls down, giggles and we see her panties back on when she spreads her legs and her blouse reveals a little cleavage.
► We hear grunts and groans outside a farm supply building and the camera cuts to an inside office window where we see a couple from the waist-up; he wears a short-sleeved shirt and she wears a bra (with her back to the camera) as he thrusts and groans loudly; he stops and zips his pants (we see no nudity) as she replaces her blouse (we see cleavage and her bare arms and shoulders).
► A woman looks at a pornographic magazine photo of a woman nude for the waist-up and we see bare shoulders, arms and breasts. Several women wear scoop-necked blouses that reveal cleavage and some wear very short-shorts that reveal nearly full bare thighs. A woman wearing a bikini (revealing cleavage, bare arms and shoulders, bare midriff and belly button, and bare legs) lies in a chaise lounge in the sun. A man and a woman wear sleeveless T-shirts with low-cut armholes (we see her bra). A man gets out of bed at night and he is shown wearing a T-shirt and mid-thigh length shorts that reveal thighs and legs.
► A woman sits astride a man in the driver's seat of a racecar and they kiss several times; she removes her blouse to reveal a bra and cleavage, bare shoulders and arms; the scene ends and it is unclear whether sex will occur.
► A man breaks off a relationship with a woman and she attempts to lure his adult son to a bar, but the younger man declines. A man meets a woman outside a farm supply building and invites her to join him inside (sex is implied) but she declines.
► One man tells another man to keep his savings account for beer and abortions. A man tells his wife that their adult son writes about climbing a South American mountain, but is really getting STDs from Argentinean girls. A younger woman asks an older man if he'd ever cheat on his wife and he says he would not; he says men sometimes become distracted and she says, "By big breasts," to which he replies, "By big personalities."

VIOLENCE/GORE 5 - A man argues with an older man, pushes him against a wall and drives to a cornfield where he confronts another man: the two men fight with many punches and chokeholds, they roll into the cornfield and struggle until one man picks up a hammer from the ground and hits the other man in the temple; the stricken man stares, we see a small amount of blood on his head and he falls dead; the killer and another man dump the body and the hammer into a cistern.
► A new NASACAR-type driver gets rammed several times by other cars, panics and backs off the accelerator; he leaves the track, get into his car, drives through a cornfield and into a large tree trunk in a suicide attempt, the car smokes and his head rests on the steering wheel as the camera cuts to a hospital room where he lies under a sheet in bed, his lip cut and his nose and forehead bruised; nurses check several tubes and IV bags as he watches listlessly and he goes home in a few days and walks with a cane for a short time.
► A man removes a handgun from the glove compartment of his friend's car as they pull up to a strip mall; the man exists the car, shoots out the shop window causing alarms to go off, runs into the store and steals something, runs back out and the two drive away.
► A man and a woman throw rocks at another woman's door at night; she runs out and catches the woman, who turns around, slaps her in the face and calls her a whore before leaving.
► Corporate investigators threaten a farmer twice with loss of land and prison time if they are not allowed into his fields and his bookkeeping records without a warrant; in one scene, another man present shouts at the agents, bashing out their car headlights with a cane and the investigators leave.
► A man sits in a car arguing with his adult son about attending a graveside funeral; they walk to the graveside, where we see a coffin and mourners as a pastor gives a prayer. We see a memorial service with a pastor giving a prayer for another dead man in the town, while a few people cry silently and a few people are shown mourning in a café later.
► A man and his adult son argue many times throughout the film about occupations, ethics, and their relationship. A man argues briefly a few times with his wife and with his father and his father curses. A man argues loudly with a farmer over land prices and with a friend about genetically modified grains.
► A demolition derby features shouting, dirt clouds and a car crash wherein one car flips end-over-end and then along its axis to land on its top; the driver emerges unharmed and starts a fistfight with another driver, but track officials pull the men apart. A man studies demolition derby videos and sees many cars flip sideways, or end over end into big clouds of smoke and flames.
► A woman tells a man that genetically modified seed companies sound like the Mafia, because they show up unannounced at farmer's fields in black cars and without warrants.

SUBSTANCE USE - Two men and a woman drink cans of beer in a car as they drive at night and the woman scans a pornographic magazine (please see the Sex/Nudity category for more details) and one of the men pulls a handgun from the glove compartment (please see the Violence/Gore category for more details) while drinking in the moving vehicle, a man holding a sealed bottle of vodka leans against a car (it is never opened), a man asleep in a barn awakens and drinks a beer from the can at dawn, several men drink beer after a car race, and a man drinks from a bottle of Jim Beam while sitting in a barn.

MESSAGE - Financial success is not always worth the price it requires. 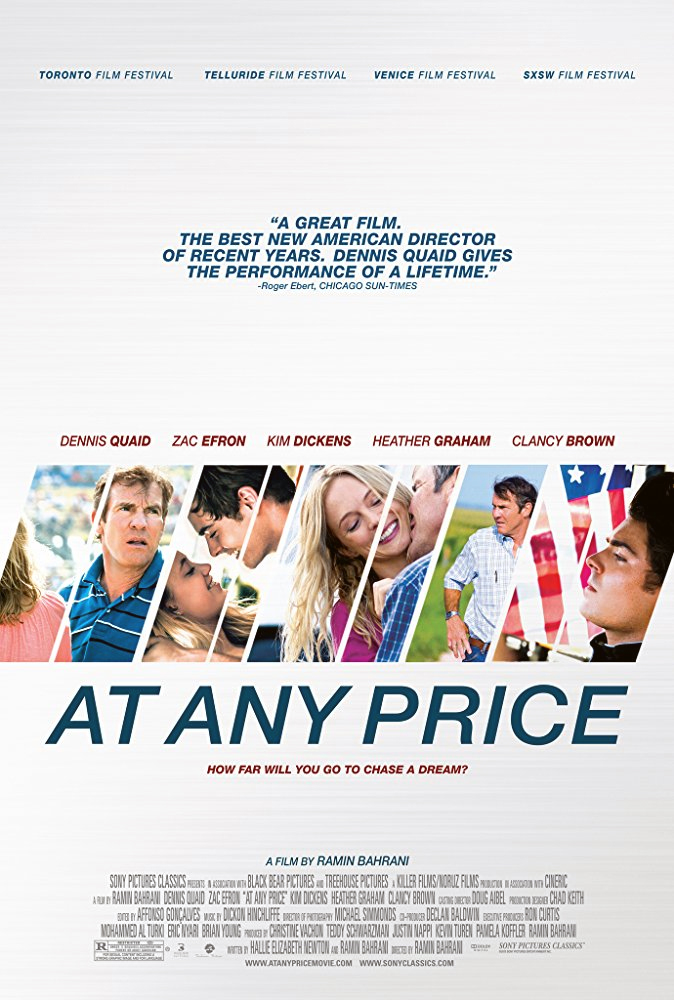