Ice Cube stars as a playboy bachelor who's interested in a divorcée (Nia Long) who has two children. On one hand, he hates children; on the other hand, her children do not like any of the men their mother dates. When he offers to bring her children to her from Oregon to Canada, the children are determined to turn the trip into a nightmare. Also with Aleisha Allen, Philip Bolden and Jay Mohr. Directed by Brian Levant. [1:31]

SEX/NUDITY 3 - A man and a woman hug and kiss, and kiss again, and a man and a woman almost kiss but stop. A woman kisses a man on the cheek, and a woman hugs a man. A woman wears a low-cut dress that reveals cleavage and part of her bra and a man admires her from a distance. An older woman pats a younger man on the buttocks. An older woman invites a younger man to join her in "Sin City," and acts seductively. A man admires a woman and says, "I gotta get with that." A bobble-head talks to a man about going to find some women and "hit some clubs." Two children talk about men "putting the moves on" their mother. A man says about a woman, "she's a breeder."

VIOLENCE/GORE 4 - A man runs into another man on a basketball court and falls hard on the floor. A man tackles a man, they both fall and slip along ice, they knock down several people, they wrestle on the ice, and one man swings a broom; security officers come to break the fight up. Two trucks surround a car on the highway, one truck shoves the car into a cement side rail, sparks fly, the car slams on the brakes, drives across the median into oncoming lanes of traffic, then off the road, and through a wooded area, down a hill over a ledge, and eventually crashes. A car catches fire, it is engulfed in flames and blows up (three people nearby jump out of the way). A girl drives a car in a parking lot, a man chases her on foot, she slams on the brakes, he slams into the back of the car, she speeds away, he jumps on the roof and in through the sunroof, she backs into a large statue, the axe that the statue holds tips over and hits the man between the legs. A man is shocked and knocked into the air when trying to jumpstart a car. A man jumps off a moving train and lands hard on the ground. Two trucks drive next to each other, they swerve back and forth and hit each other, a man from one tries to climb onto the other, a boy and girl inside one truck hit the driver, wrap a cloth around his head, and the driver stops the truck; the children then climb out and hit the driver in the face with a seat belt. Two children get into the cab of a truck and their adult companion is left behind; he chases the truck, falls off and lands on the ground. A brother and sister shove each other, call each other names and are generally abusive to each other in several scenes. Two children accuse a man of kidnapping them and enlist the help of another man. A deer panics and rears up after being surprised by a flash camera, the deer kicks a man repeatedly, they end up on the ground, the man threatens the deer and the deer runs away. We see a dead deer tied to the hood of a truck and a man imagines two children tied to the hood of his car. A boy kicks a man between the legs and punches him in the face, and a boy kicks a man in the leg. Children at a party are out of control and are throwing balls, knocking each other down, falling on a table (thus breaking it), and tackling a man to the floor. A bully steals a boy's brownies and the boy snarls at him, scaring him into giving the brownies back. Two children ride on a train boxcar, and man runs alongside the train trying to get on; the man returns on horseback, riding alongside the train, the horse stops and throws the man over and onto the ground. A man is pelted with tomatoes, slips on marbles, falls hard on his back, large balls filled with glue are dumped from a second floor window hitting him in the head and body, and an inflatable Santa Claus falls off a roof and lands on top of him. A man is tackled to the ground by airport security. A man yells at a boy and the boy cries, and a man yells at a boy and a girl and they both cry. A man yells at two boys who come into his store, and he throws a football at one boy who is trying to shoplift and hits him in the back of the head. A boy blows a raspberry at a man in a car, the man gets out of his car and acts threateningly toward the boy saying, "you want a piece of me?" A boy has an asthma attack, gasps for air, and falls to the ground unconscious; he regains consciousness after a man gives him a couple of sprays from his inhaler. Two children are devastated when they see their father with his new family, and they feel left out and abandoned. Two children sabotage a man at every turn trying to keep him away from their mother. Two boys lick a store window (we see remaining slime on the glass). A boy acts hyperactively after eating many sweets, and then he vomits on the inside of the windshield of a car and the other two passengers (we see goo). A man squeezes a drink pouch and it spurts juice on the interior of his car. A boy urinates in the sink of a public restroom, and a woman comes out of a stall and uses her purse to pound on a man who's accompanying the boy; the man turns around (while holding the boy) and the boy urinates on the woman (we see the stream). A boy squirms in his seat because he has to use the bathroom. We see a very dirty bathroom with an overflowing toilet. A woman flatulates several times.

MESSAGE - Never give up. Material objects do not matter in life; it is rather our families and relationships that matter. 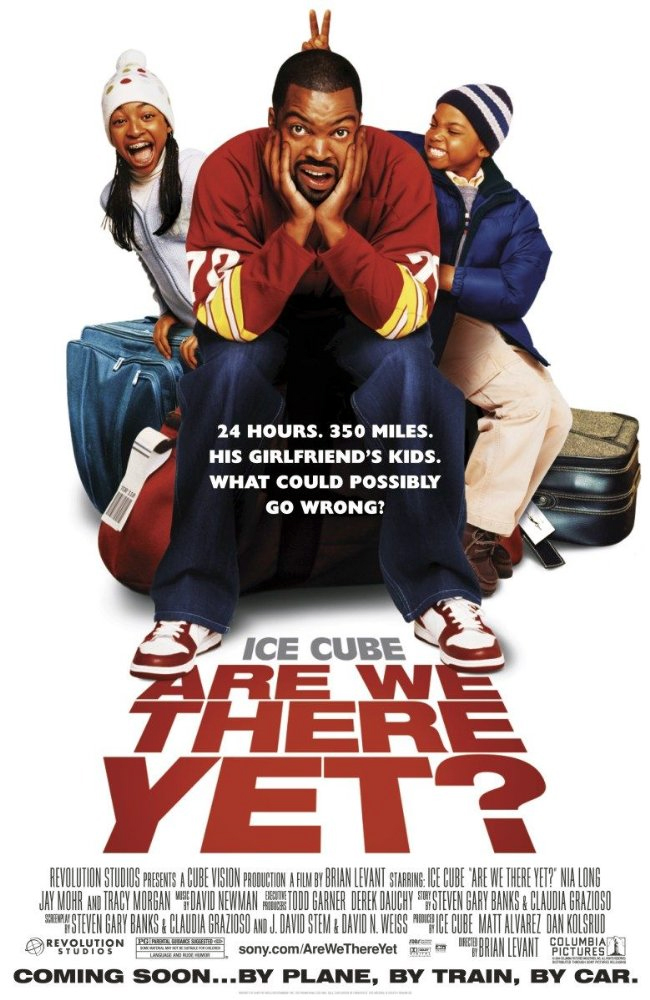