Ice Cube revisits his role as Nick Persons from "Are We There Yet?" He is now married, with two stepchildren, and expecting twins with his new wife. Realizing that they can no longer live in Nick's small city apartment they find a beautiful fixer-upper in the country, but the problems begin as soon as they move in and realize that their dream home is a money pit. Also with Earvin Johnson, Ice Cube, Nia Long, Aleisha Allen and Philip Bolden. Directed by Steve Carr. [1:32]

VIOLENCE/GORE 3 - A boy shoots a nail gun in the air, we hear a screech and see a bird crash dead to the floor next to him. A man holds a chipmunk in his hand and talks to it, whereupon a hawk swoops into the room, snatches the chipmunk and flies off screeching.
► Two men fight: one swings a stick at the other, they argue, one kicks the other, and he falls on the ground while a stick is thrust into the ground near his crotch.
► A man makes a noise at a raccoon that's on his roof, the man walks out onto the roof carrying a mop, the raccoon hisses at the man, the man raises the mop, and crashes through the roof and onto the porch below (he yells and we see him covered with rubble but he's OK). In another scene, a man standing on his roof porch breaks through and crashes onto the ground below (he's OK).
► A man is zapped by electricity while fixing a ceiling mounted light fixture and is thrown off a ladder and to the floor (he's OK).
► A man jumps into water and wrestles a very large fish, and then throws it onto a pier (we see it flapping around briefly).
► A man in a kayak tips over and while trapped under water sees a huge fish swimming toward him; the man screams, the fish screams and swims away and the man rolls himself back to the surface. A man and two children walk through woods, they come upon a deer that bares its teeth and snarls, and the humans scream and run away.
► A boy holding a leash is dragged behind a dog, into thick woods (he screams but is OK).
► A bat flies into a bedroom, a man swats at it and it flies out of the room but many more fly in and chase the man through the house and then outside.
► A boy fishing from a pier is pulled into the water by a large fish on his line, and a man jumps into the water to rescue him.
► A man burns his hand when he touches an oven door. A man hammers his finger. A man leans against a wall and breaks through it. A ladder tips over and breaks a car's windshield.
► A man faints after seeing a baby crowning and a teenage girl drips hot sauce into his mouth to revive him.
► A man forces a bathroom door open while his teenage stepdaughter is inside. A man yells at several people in several scenes. A husband and wife argue and she moves out of their house. While in labor a wife yells at her husband and moans.
► We hear that a man's wife died and that he has had trouble recovering from the grief. A man describes raccoons as vicious.
► A man gets pizza stuck on his shirt when food from the fridge falls on him, he has cereal milk spilled on him when his step-son runs into him and he has fried eggs splashed on his face when the pan is flipped in his direction (we see goo dripping off him). A man picks up raccoon feces and smells it. A man gags when a bug flies in his mouth. Many people bring raw fish to new neighbors as welcome gifts (the recipients react to the smell and appearance of the fish). A man flatulates and his stomach makes loud rumbling noises. A man sits on a toilet and adjusts his position to test it (the lid is closed and he is clothed).
► An animated clip that accompanies the opening credits shows a man and a raccoon being zapped by electricity, the man is repeatedly struck by the words of the credits, he breaks through the floor, and he falls off a ladder and something falls on him.

SUBSTANCE USE - A man drinks beer and shots of alcohol in a bar, people are shown drinking alcohol at a party, and people drink alcohol at another party.

DISCUSSION TOPICS - Family, responsibility, love, death of a loved one, grief, dealing with children growing up, disappointment, respecting children as they get older.

MESSAGE - The family feeling can be found in many places. 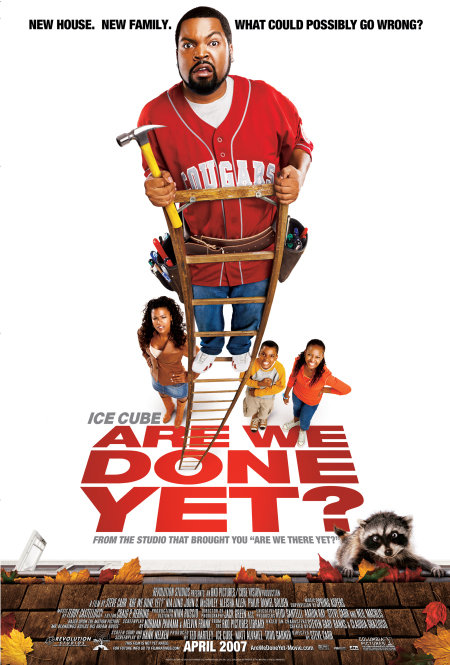