Director Francis Ford Coppola's 1979 take on the Vietnam war was loosely based on Joseph Conrad's novel "The Heart of Darkness," and is notorious for its production problems. For some critics it is the definitive film on the Vietnam experience, the only film to capture its insanity and surrealism, and perhaps the director's magnum opus. For others it is pretentious and ponderous, especially after the addition of 53 minutes of additional footage. With Marlon Brando, Robert Duvall, Martin Sheen, Laurence Fishburne and Dennis Hopper. [3:23]

SEX/NUDITY 7 - Two men remove the tops off two women and we see their bare breasts: both couples begin kissing and touching each other passionately, and one woman makes sexual comments and noises. A woman removes her robe behind a sheer curtain as a man looks at her; we see her bare breasts and abdomen to just below the hips, and the man caresses her breast briefly. A man caresses a woman's face tenderly. A man and woman lie in bed together smoking a pipe; she's in a robe and he's bare-chested with his pants on. A nude man runs through an army camp and we see his bare buttocks and see him from the side and back as he bends over revealing a hint of genitals. There are several posters of nude women exposing bare breasts and bikini panties, and men look at and talk about Playboy centerfolds (we see more bare breasts). There are some sexual references: A man yells in frustration after not having had the opportunity to have sex with a woman, and a man tells a group of men that they can have a couple of hours with some Playboy bunnies. Three Playboy Bunnies entertain a group of soldiers and they dance suggestively in tiny costumes which expose cleavage, thighs and a hint of buttock cheeks: the soldiers make sexual remarks and yell. A man hangs from a tree covered with blood and nude from the waist down (we see his genitals). We see a man bare-chested and in his underwear a few times; one time he appears to be without underwear but he draws a sheet up to his waist before anything more is seen, and another time the sheet slips and we see a full shot of his bare buttocks. Also a man drops his pants and we see his bare buttocks. A group of people are dressed in native-type garb which exposes part of their buttocks. Two men hang from a helicopter and one ends up pulling the pants off the other exposing his boxer shorts. A number of men are seen bare-chested in a battle environment in several scenes. We briefly see a photograph of a group of partially nude people, another photo of a woman with bare breasts, and we see a group of nude children sitting on a shore (none of which are in a sexual context). A man urinates in a forest; we see him from the back and hear a bit of a trickle.

VIOLENCE/GORE 9 - A man is hacked to death with a machete-type weapon: the man stumbles about while being struck and we see his blood covered face and some blood on his body. A bull is hacked to death with machete-type weapons and it crumples to the ground: the animal is tied to posts and we see its neck being hacked at with red, bloody wounds; its lower back is also hacked. A severed head with blood on its face and neck is tossed on the lap of a man who writhes in terror. A man is shot through the chest with an arrow; we see his bloody chest and blood comes from his mouth. A man is shot to death and his blood-soaked body is shown a few times. A man screams and writhes from a leg wound (we see his very bloody leg as a man tears away his pant leg). We see a man holding a dish over his very bloody stomach wound as he begs for water. A group of people on a boat are gunned down and we see their bullet-riddled bodies; one woman who is wounded but still alive is shot to death. A bomb is thrown inside a helicopter, it explodes and we see a man fall on to the ground in flames. Helicopters bomb and fire upon a village; people (including children) panic and run, a gun turret is bombed and three men fly through the air, people are gunned down as they run, buildings are blown up, a car with people in it is blown off a bridge, and fires burn. A village is bombed; buildings and trees burn, a tank drives through a building crushing it, a baby is covered with blood, and people panic and run. There are many bloody, dead bodies which lie by a trench, dead bodies lie covered with tarps, and a very bloody baby is carried by a woman. There are many dead and bloody bodies in a village in various degrees of decay; a man hangs from a tree covered with blood and nude from the waist down (we see his genitals), three other bodies hang from trees, a large number of heads litter a shoreline (some on poles). A box tips over to reveal a dead body and it appears to be nude and it also appears to have some wounds but it's hard to make out. A man punches a mirror and we see his blood-covered hand as he smears his face with it. A man is soaked with the blood of another man after he kills him. A bull is smeared with chicken's blood in a ritual-type celebration. There is an eerie scene of an army post where fires burn and there is gunfire back and forth across a river; we hear an enemy calling out threats from the opposite shore, then a gun is fired and the voice is silent. There is a burning helicopter stuck in a tree and we see wreckage and what seems to be bodies on the ground under it. We see photographs of many dead bodies. A flare goes off inside a helicopter causing smoke to billow and some commotion among the men onboard, and a flare sets the canopy of a boat on fire and the men onboard scramble to put it out. Two men walk through a thick forest and a tiger jumps out at them causing them to panic and run and when they return to their boat they open fire at the brush thinking there are enemies chasing them. A group surrounds a man, picks him up and turns him over dragging him through some mud. Two groups of men hold each other at gunpoint. We see a covered body on a makeshift stretcher carried and lowered into a grave. A man holds the body of another man in the water, he lets him go and we see him sink. A man falls from a bridge after it is bombed. Two soldiers surf with bombs falling in the water around them. Bombers fly over a tree lined beach and drop napalm bombs. A young man panics at the idea of getting out of his helicopter to go fight. A group of men jump on a stage trying to reach Playboy bunnies who are dancing for them and a fistfight breaks out, and another fistfight breaks out with four men pounding each other and rolling around in the mud. A man talks about children having their arms cut off. Some men talk about their CO having been blown up by a land mine. A man talks about how many people he has killed in war. A man tells a story about how he shot a man. A man recounts a story about a man having shot himself in the head. A man talks about destroying (killing) a group of people. A man talks about a snail crawling across a straight razor conjuring up a gruesome image. A man reads an article about Charles Manson. Two men dangle from a helicopter as it takes off and they end up falling some distance into water. A boat drives recklessly and knocks two people off a raft.

MESSAGE - War changes you permanently. Good does not always triumph. War is madness. 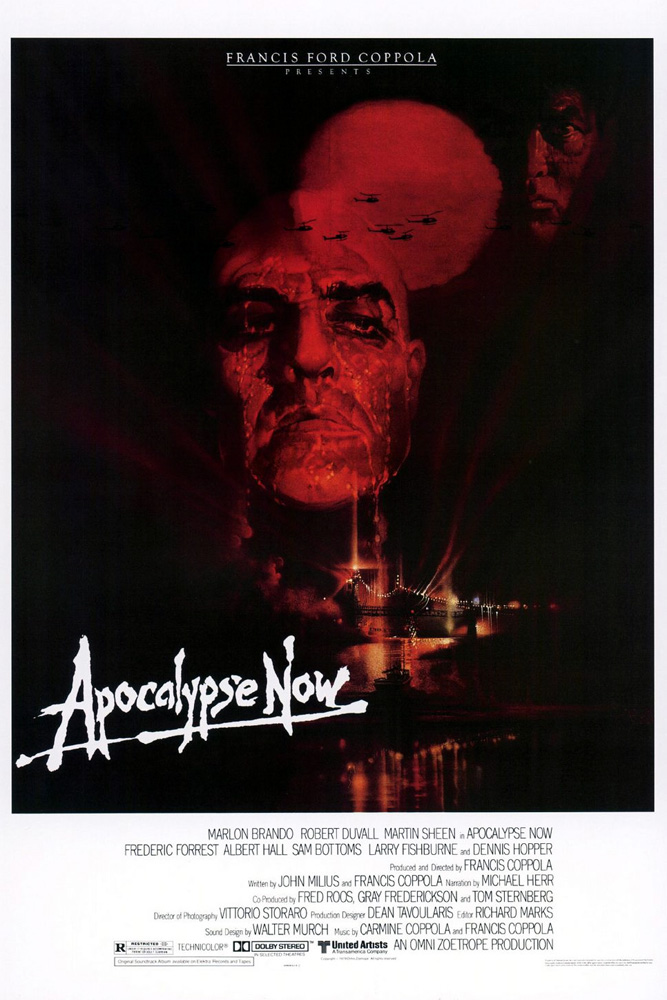