While Cody Banks (Frankie Muniz) seems a typical teen, he's actually part of a secret CIA program to train teenagers as agents. Agent Banks' abilities are put to the test when he has to get close to the teen daughter of a scientist who's unknowingly developing deadly nanobots for an evil organization. However, the one thing the CIA didn't teach their agent to do well is how to talk to pretty girls. Also with Hilary Duff, Andrew Francis, Angie Harmon and Darrell Hammond. [1:41]

SEX/NUDITY 3 - Two teenagers, a boy and a girl, kiss. A holographic woman wearing a tight-fitting outfit slinks toward a teenager and speaks seductively to him. A group of people offer a teenager advice on how to talk to a girl; one woman talks about the mating habits of animals, and we see a computer image of the male and female bodies. Two boys compare dating habits; one remarks that he "plays doctor" in the tree house. A man refers to a teenager as a "lady-killer." A teenager looks through X-ray glasses at a woman who covers her breasts with her hands (the boy breathes heavily) and at a few other women (we see their undergarments). A woman wears outfits throughout the movie that reveal her cleavage, bare abdomen (and belly button), bare legs and shoulders. A woman wears an off-the-shoulder top that reveals her bare shoulders and cleavage. A man's shirt hangs open and exposes his bare chest. We see teen boys in a locker room: some are wrapped with towels and bare-chested, a woman pulls the towel off one and we briefly see him in a jockstrap. A teenager wears pajama bottoms but no top.

VIOLENCE/GORE 4 - An ice cube with nanobots is shoved into a man's mouth, he writhes, convulses and we hear crunching as the bots are released (presumably they eat him up from the inside out), and we see the man shriveling and disintegrating. A young boy is left alone in a car, he releases the emergency brake, the car rolls down a hill through traffic, and a teenager on a skateboard chases the car, holds onto the grill and ends up in front of the car and onto the hood of the car. The car nearly hits a truck and other cars, the teenager climbs in the car through the sunroof, pulls the brake and stops the car just as it arrives at a train crossing. A man (with a charred and bloody ear and face) shoves a teenager near a cliff, and they struggle and fight. The teen jumps from one ledge to another, the man is strapped into a flying machine and takes off, while the teen jumps and catches onto the leg of a helicopter. A teenager kicks and punches several other teenage boys who are trying to bully him. Two teens (a boy and a girl) are approached by bad guys in a diner; they run through the restaurant, across a counter top, and through a kitchen -- where the boy beats a couple of the men with frying pans but is eventually punched hard in the face (we see him with a bloody and bruised eye). A woman punches and kicks several men. A teen girl is held by a man who holds an ice cube filled with nanobots that begins to melt on her forehead. Explosions are set off and a structure with people inside begins to crumble. A teenager races down from a snow-covered peak on a rocket powered snow board: Two men chase him on snowmobiles, one is knocked off and his pants are set on fire by the rockets, and the other is knocked off by a tree limb, while the teen sails over a cliff, gets stuck in a tree, falls and lands hard on the ground. A teenager is zapped with an electric charge and he falls on the floor and smolders, and several men are also zapped. A boy and a woman spar with punches, kicks and flips. A teen girl is kidnapped and forced into a car. A teenager sneaks into a laboratory, dangles from a cord (the room is full of motion sensors), walks across a ceiling, falls on the floor setting off alarms and scrambles to get away from men chasing him. A teenager is thrown into a swimming pool by other boys. A teenager daydreams about beating up another teen boy with punches and kicks that send him sliding across a desk full of glass beakers. We see a video where a man is presumably attacked and we hear him struggling and yelling. A woman flicks teenaged boys with a towel and one is hit in the groin. A teen girl falls off a ladder and slides down a banner to the ground (she hurts her ankle). A man skewers a plastic seal with a fork (it squeaks). A teenager drives recklessly through obstacles in a Drivers Ed class, and another teenager crashes into obstacles. A man yells at people in several scenes. We hear a man gagging and see his chin and shirt covered with vomit, a dog urinates on a man's shoe, a man holds up a bag of dog excrement, and a man flatulates in a crowded van and everyone reacts to the odor. A boy has a bloody cut on his cheek, and we see a man with a large, jagged scar on his throat and a clouded eye.

MESSAGE - Not everything is as it seems. Power corrupts. 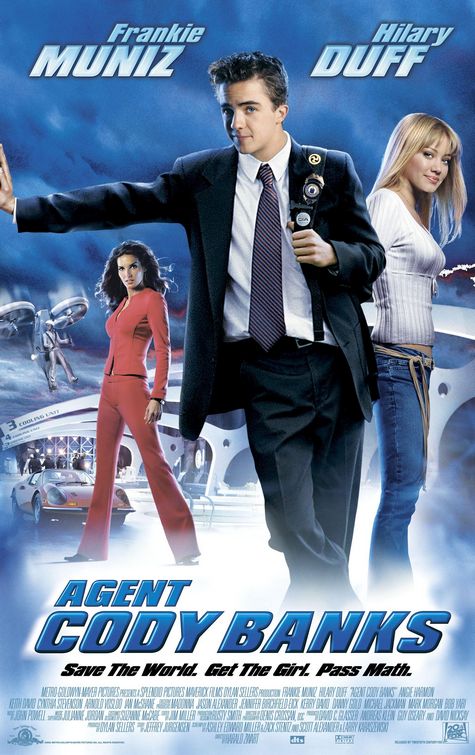