A man (Cuba Gooding, Jr.) cannot forget his girlfriend who dumped him, and his friend (Horatio Sanz) convinces him that he needs to get out and meet other women. So, they decide to try a Caribbean cruise, but once they're on the ship, they realize that they were accidentally booked on an all-gay cruise. Things get complicated when Cuba meets a beautiful dance instructor and they become very good friends because she thinks he's gay and therefore can be comfortable to be herself. Also with Will Ferrell, Vivica A. Fox and Artie Lange. [1:33]

SEX/NUDITY 8 - A man climbs under bed sheets, moving toward a sleeping woman's crotch; she wakes up and wraps her legs around his head, he stands up and she sits on his shoulders, he falls on the floor and she is on top of him thrusting rhythmically and suggesting that he is performing oral sex on her. A woman asks a man to demonstrate on a banana how he performs oral sex on a man, and then she demonstrates for him -- she licks and kisses the banana, describes what she is doing in graphic terms and we see the man pressed against a porthole with his pants down, yelling and a man outside with some goo on his face (suggesting that the man has ejaculated out the window). A woman puts a baseball bat in her mouth and moves it rhythmically in and out as a demonstration of oral sex. A man and a woman kiss, he puts her against a tree and we hear her moaning and see the tree shaking and oranges fall down (they are presumably having sex). An emergency float is full of women in bikinis and some have removed their tops revealing bare breasts. Part of a woman's nipple shows above her swimsuit top. A woman takes off her clothes, down to her panties (we see her bare back to the hips and bare thighs) in front of a man and asks him to stay with her (she is afraid of a storm). Men are shown kissing, caressing and hugging each other throughout the movie and there are references to sadomasochism. A man gives another man a big kiss. There's an extended scene of a man and woman dancing together: they move seductively, hold each other, caress each other and nearly kiss. A man and a woman kiss, she invites him to have sex with her and she grabs his buttocks. A man and a woman lie in bed together (he's bare-chested and she is in panties and a tank top). A man wakes up in bed with another man. A man is visibly aroused. A man licks a sausage link suggestively and asks another man if he'd like a bite, a woman licks an ice cream cone suggestively, a woman makes pleasured noises while eating chocolates, and a woman makes a suggestive remark while riding a donkey. A man whispers in another man's ear (it is implied that he has made a sexual proposition). A man pretends to be having an orgasm and squirts lotion on a woman's back. A woman lies in bed in her underwear waiting for a man. A man pinches another man's buttocks, and a woman pinches a woman's buttocks repeatedly. Men dance together in a few scenes. A man invites two other men to go skinny-dipping. Men talk about having made love in unusual places. A woman puts on lipstick sensually, while a man admires her. A woman gives a man mouth-to-mouth resuscitation and he wakes up smiling. A man makes a sexual hand gesture, and another man makes a sexual hand gesture. A woman makes a comment about a sexual escapade with another woman in a hot tub. Two men fall back into a bed together. Men do a cabaret show and wear outfits that reveal bare chests and buttocks. There are phallic-shaped ice sculptures and foods. We see men's bare buttocks through bottomless pants in several scenes. A man walks with another man who's on a leash. A nude woman lies face down on a massage table with a towel covering her hips. Men admire women sunbathing in bikinis. A group of women jog in swimsuits and high heels and men admire them. A woman wears a top that cuts to the waist with nothing underneath and we see her cleavage and bare abdomen. A woman wears several outfits that are made of a nearly sheer gauze fabric and her nipples are partly visible. Women wear low-cut dresses that reveal cleavage and short tops that reveal bare midriffs. A man and a woman kiss romantically.

VIOLENCE/GORE 3 - A man shoots a flare gun and hits a helicopter causing it to crash into the ocean. A man slips, hits his head and falls unconscious into a swimming pool. A woman picks a man up and throws him into a table. A man head-butts another man, a woman punches a man in the face and he falls back into a swimming pool, and a man slaps another man in the face. Two men parachute onto a cruise liner and land in the swimming pool. Two women insult each other and then begin to shove each other. Two men yell at and insult each other and wrestle on a bed. Two men yell at and insult each other. A man sprays a woman using a fire extinguisher and smoke comes from her crotch area. A man vomits on a woman's dress (we see the goo splatter on her and hear him gag). A man is told that his mother has died and he goes away crying. A man passes out and falls off a stool onto the floor.

MESSAGE - Love can be found in the most unusual places. Never be afraid to befriend someone who may be different. 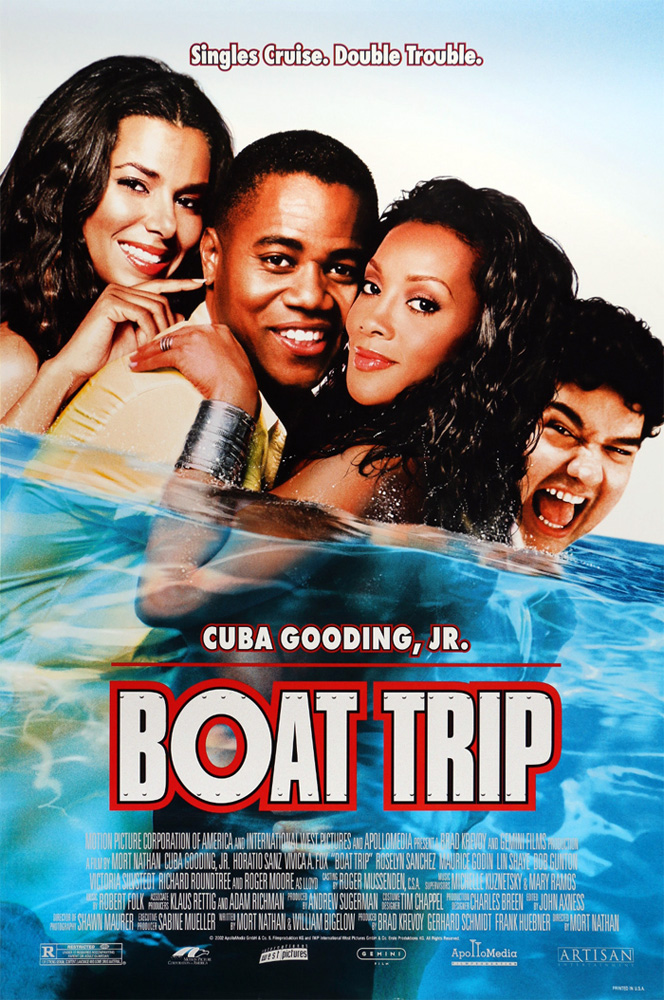