Sequel of sorts to 1995's "Jumanji": Two bickering brothers are left at home with their teenage sister, who just wants to be left alone in her room, when their father runs to his office for a few minutes. The youngest boy finds an old board game and when he starts playing their house is transported to outer space, where they're attacked by a meteor shower, a dysfunctional robot, and lizard-like aliens. The only way to get back to Earth is to finish the game. With Josh Hutcherson, Jonah Bobo, Dax Shepard, Kristen Stewart and Tim Robbins. Directed by Jon Favreau. [1:35]

VIOLENCE/GORE 5 - A very large, defective robot with glowing red eyes, charges toward two boys repeating, "alien life form must destroy": the boys are frightened, they dodge the robot and it crashes into a wall where its arms are stuck; it gets one arm free, uses a circular saw to cut bricks away to free the other arm, and it charges after one of the boys, again, until it eventually crashes through a window and out into space, but it comes back into the house, crashing into another wall. A robot grabs a boy by the throat and squeezes (it lets go though). A boy walks down to a basement where a robot lies in a crumpled heap; the boy retrieves a sneaker and a hatch on the robot opens revealing a small drill that begins to try to repair the robot (sparks fly and drills whirr). A robot chases several Zorgons out of a house, one of their ships explodes and one Zorgon still left in the house is crushed under a piano (some of the Zorgons whimper).
► Aliens called Zorgons look like carnivorous dinosaurs, with frog-like tongues and very large fangs, and we're told they like "meat": A boy is lowered in a dumbwaiter to the basement where he must walk past several large aliens the rope slips and the boy falls fast (a man catches the rope before the boy hits the ground); we hear aliens snarling and growling in the distance, and a boy encounters several goats, one of which turns toward him and sprouts four eyes on stalks. A Zorgon roars, it rouses the attention of several other Zorgons, they charge after a boy who runs away, and one shoots its tongue out and it sticks at the back of the boy's head (the boy pulls away and slams a door behind him). A Zorgon climbs up a flight of stairs and toward a man, a girl and a boy (they are afraid of being eaten).
► A spaceship flies alongside a house which is floating in outer space, firing its cannons: two boys that are inside the house hide in a fireplace, a cannon shot causes a huge flame to shoot through the fireplace, the boys run, and several more shots hit the house and rubble is strewn everywhere. Several spaceships shoot harpoons into the house, pull alongside, and aliens enter the house through the basement; a man goes to the basement to retrieve something, and we hear him scream over a walkie-talkie and are led to believe that he was attacked by an alien (he is fine).
► Meteorites come through the ceiling and go through the floor of a house where two boys are playing; one meteorite strikes an urn that contains the boys' grandmother's ashes, one disintegrates a small stuffed animal and a large, glowing one crushes a TV set, while the boys dodge the burning rocks by hiding in a fireplace.
► A house floating in outer space is pulled toward a flaming planet, and the people inside the house hold onto objects to keep from falling out; one boy dangles from a light fixture that pulls away from the wall crashing into a window (it does not break), another boy slips along the floor and hits a wall while a robot tries to grab him and instead pulls his sneaker off, and a teenage girl (who is frozen solid) falls down a flight of stairs but appears uninjured.
► An entire bathroom, including a teenage girl that's inside, is covered in ice (the girl is in cryogenic sleep): a boy walks toward her with a torch convinced that he needs to "melt her." A black hole swirls in the distance, large spaceships are sucked into it, as well as a girl and a boy. In two instances, two individuals touch each other's hand and one of them disappears gently, by blending together.
► A boy is shot toward the ceiling, clings onto a hole in the roof, lets go, and floats into outer space; a man uses a personal jet pack to go after him, and they return and land hard on the floor.
► A boy throws a baseball that hits another boy in the side of the head, the boy who was struck chases the other boy through a house; the first boy hides in a dumbwaiter, the second boy finds him and lowers him down to the basement (the first boy is very scared).
► A man describes alien beings as, "cold blooded lizards that eat meat." A boy walks through a dark basement, hears noises of pipes and a furnace and is very scared; he tries to open a gate, it is locked, and he climbs through shelves and opens a door to get out.
► A man grabs a boy by the arms, yells at him and shakes him. A teenage girl yells at her father and is very dismissive. A teenage girl is insulting and dismissive toward her two younger brothers (she smacks one in the face when he tries to wake her up). A boy is abusive to his younger brother calling him names and being dismissive. Two boys yell at each other in many scenes. A man yells at his two sons.
► An astronaut slams into the living room window, opens the front door and enters the house as the boys cower in a corner. A boy opens the front door of his house and we see that the house is no longer on the ground but flying through an asteroid belt in space.
► A boy burns his hand on a hot pot. Two boys drag their frozen sister upstairs. A boy throws a ball that knocks over a glass of juice spilling it on his father's work.

MESSAGE - Cheating and lying are wrong. Appreciate your siblings. Everybody is good at something. 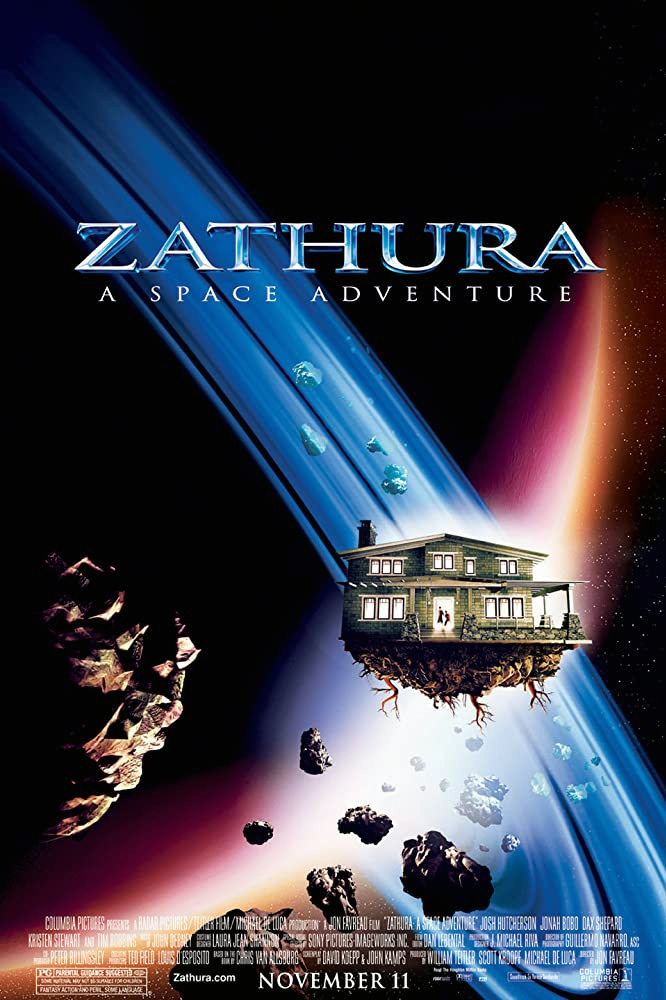