SEX/NUDITY 6 - In a bedroom scene, a woman removes her robe to reveal a black bra (cleavage is revealed), black panties, garters, stockings and pumps, she sits on the bed, removes her shoes, a man wearing pajamas walks to the side of the bed, and we later see a close-up of her bare breasts, while she is lying on the bed with her knees bent upward; we then see the man kissing her thighs and genital area (nothing is visible) and the scene ends.
► We see a man lying in bed dressed only in knee-length white shorts, and the back of a woman as she sits astride his stomach (she is wearing white panties, garters and stockings that reveal her bare back and upper thighs) and the scene ends. A young woman is shown in bed several times, in a full-length gown, revealing bare arms and a bit of cleavage when she leans toward the camera; she's lying side by side with a young man wearing pajamas (they are never shown having sex). A young man is shown nude, face down in a bathtub (his bare back, buttocks and legs are visible). A young man lies nude on a bed, a towel covering his groin and is beside a horizontal full-length mirror showing his reflection.
► A young man and a young woman kiss twice.
► A nurse tells a young male patient that he may ask her out to a movie; she then walks behind him, presses against his back, giggles and walks away.
► Six nurses turn a 70-year-old semiconscious male patient over in bed; one looks at his groin, giggles and says that his body is fighting his age (we do not see what she is looking at, but sexual arousal is implied).


VIOLENCE/GORE 6 - A man walks into a street, raises his umbrella, and is stuck by lightning: he rises into the air, falls to the ground in a glowing heat ball, his umbrella lies burning in the street, and he lies on the pavement with his entire face bloodied and red-blotched and his eyes look glazed. A young woman standing on a hill is struck by lightning when she raises her umbrella in the rain; a friend of hers is found lying dead outside a car (we see no blood or injury), patches of leaves are burning several yards away from the body, and the young woman is found huddled in a shallow cave, chanting in Sanskrit, with a small amount of blood on one index finger. A man covers his mouth with one hand, runs outside into the street, vomits substantial amounts of blood, and then runs away.
► A man uses a magic power to turn a gun, point it into a man's mouth and fire it; we see the muzzle of the gun in the mouth, we hear the shot and see only the shadow as the man collapses and dies.
► Several people discuss kidnapping a young man, one holds a gun on another man, and a woman steps in front of the gun and is shot and killed (no blood is shown).
► In several hospital scenes, a man lies completely wrapped in gauze, except for his bloody fingers; the man is then uncovered up to the knees, his arms are bare and bloody, and some areas of his chest are bare and covered in scars and blood.
► A scene in a Nazi experiment warehouse shows the silhouette of an immobile horse hanging in a sling and being raised; we see the silhouette and then the actual horse being struck by an electrical current (the horse appears dead).
► A young man partially in bandages sits up in a hospital bed, screams that he is not mute and spits out several teeth (there's no blood).
► In three dream sequences, a humanoid demon chases a young woman; a young man reads her thoughts (a light glows from his face and hands) and tells her that the demon is Shiva, the Hindu Creator and Destroyer.
► An elderly man tosses and turns in bed, and we see him in his pajamas walking down a street and talking to himself in despair. A young man is shown talking in his sleep several times, tossing and turning in bed and dreaming of a skull. Two women light candles for the dead at a street kiosk.
► The entrance of a cave is blown open with explosives, the skeleton of a young woman is found and a young man picks up the skull and examines it.
► A young woman wakes up when there's a full moon and speaks in progressively older languages and ends up screaming and writhing violently on the floor. A woman is placed in a medically induced coma. A young man gives a woman an injection in the hip. A young woman looks into a mirror, sees the face of an older woman, and screams.
► A young man's reflection in a full-length mirror talks to him, saying that atomic war is necessary to mutate the human race into perfection, the young man smashes the mirror with a chair, the reflection gasps, breathes heavily, slides down the inside of the broken mirror and disappears. A young man in a hospital looks in a mirror and sees himself as an elderly man; the elderly version tells him he in danger and that the Nazis want to kidnap him and use him for experiments to creating a super race. A young woman and young man argue briefly after she breaks their engagement.
► The film begins with loud, ominous music, the sound of heavy breathing and gasping and images of a skull appear three times on a hazy background of dark colors. We see several close-ups of headlines about WWII progressing in Europe, and Germany and Italy declaring war on the U.S. and there are additional headlines about Hiroshima and other Japanese cities, and a close-up of a mushroom cloud.

SUBSTANCE USE - In a café scene a man pours five shots of vodka, and in two restaurant scenes diners sip wine. In several scenes, a young man smokes and blows smoke rings, sometimes into the face of another young man, and young women smoke cigarettes in a couple of scenes.

MESSAGE - Time and history are sometimes unexplainable and uncontrollable. 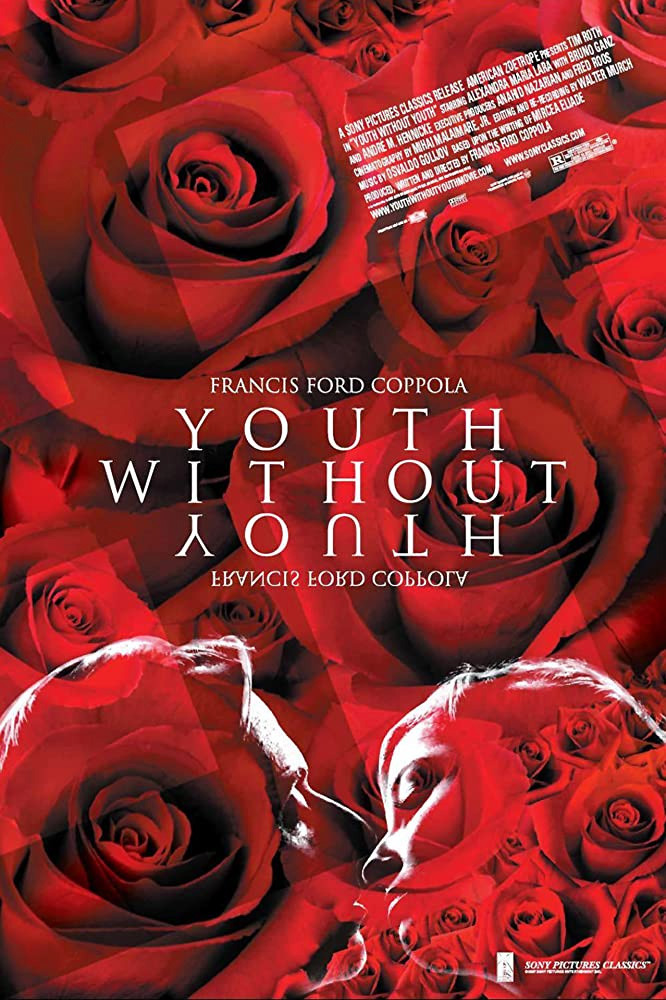