Zohan (Adam Sandler), a former counter-terrorist Israeli agent pursues his dream of becoming a hairdresser. When a greedy landlord attempts to ignite a conflict between the Israeli and Palestinian business owners in a small neighborhood, he must come to the rescue of the entire community while trying not to reveal his true identity. Also with John Turturro, Emmanuelle Chriqui and Rob Schneider. Directed by Dennis Dugan. [1:53]

SEX/NUDITY 7 - A man and a woman have sex: we see his bare chest, she is wearing a bra, and other body parts are blocked from view by objects in the room. A man and woman moan behind a closed door and it is implied that they are having sex: the walls shake, dislodging loose items, and the door opens, revealing a man buttoning his shirt and the woman with smeared makeup (we see this scene repeated several times throughout the movie, with different women).
► A man appears to receive sexual gratification from a piranha that's down his pants. A man appears to receive sexual pleasure from holding a fire hose between his legs. A man thrusts on the door to a store while fantasizing about having a job there. A DJ scratches records by thrusting on the turntable.
► A young man dances and rubs against a woman. A man pushes his groin against a woman's shoulder, while encouraging another man to do the same and we see the two men thrusting against a woman's shoulders.
► A woman in a smock hugs a man, and the smock falls open revealing her bare back and buttocks. A nude man styles hair and we see his bare buttocks in a mirror. A nude man cooks at a grill (his bare back and buttocks are visible), dances and shakes his buttocks. A man throws a fish in the air and catches it between his buttock cheeks. A man catches and throws a Hacky Sack with his buttocks.
► A man licks a woman's ear and then buries his face in her breasts (she is wearing a low-cut top that reveals cleavage). A man flirts with a woman, commenting on her buttocks and breasts, a song about stripping plays on the radio, the man removes the woman's earring with his tongue, dances suggestively while washing her hair, sprays water and shampoo suggestively over her, and she rubs her breasts and side over her clothing.
► A man strips off his shirt and pants, revealing a bathing suit and the camera focuses on a noticeable bulge in front of the suit. We see men and women in bathing suits during a beach scene. We see a man wearing boxer shorts with a bulge in the front. A man wearing boxer shorts and three women in bras and panties loiter in a hallway.
► A man emerges from a pile of women clad in bras and panties. A woman wearing a bikini pours a soda on her chest suggestively. A man in short shorts dances suggestively. A man cuts hair in his boxer shorts as women put dollar bills in his waistband. A woman licks lotion off of a man's nipples. We see two elderly women wearing fetish clothing.
► A man grabs and adjusts his groin. A man slaps his groin as part of a salute. The camera focuses on the bulge of a man's crotch as it moves, implying that his penis is waving goodbye. A woman's fake breasts deflate.
► A man tells a woman that he is only able to get an erection for her. A man tells a young man that he is planning to have sex with the young man's mother. A hairdresser makes many sexually suggestive remarks to his female customers, and he implies that before they have their hair styled they are unattractive, but their subsequent hairstyle gives him an erection. A woman playfully slaps a man on the face while talking about erectile dysfunction. A man explains to another man that his sexual dysfunction is caused by being in love with one woman. A woman refers to a haircut as "orgasmic." Men talk about having sex with several prominent female political figures. A woman talks about having multiple sexual partners. A man barters for a sexual favor from another man's wife. A man shows his pubic hair and penis to a doctor and talks about sexual dysfunction (we do not see his genitals). A man talks about the size of his penis and pubic hair to another man. A man implies that women enjoy having sex with him because of his physical attributes. A man talks about bleaching a woman's nipples and slapping her. A man talks about his girlfriend's buttocks and breasts. A man comments on the figure of a woman who turns out to be his mother. A woman comments on another woman's prominent cleavage. A woman talks about applying Neosporin to genital sores.


VIOLENCE/GORE 6 - A man cuts off a man's hand and we see the dismembered hand stab a man in the back with a knife (there's no blood), and a man stabs himself in the leg with scissors (there's no blood).
► A man tackles a man and when he stands up, we see that the man is contorted into a pretzel shape; also, a man twists several men into pretzels. A man kicks the back of a chair, sending the man who was sitting in it flying across the room and into a wall.
► A man kicks a man in the head, knocking him down. In two cases, a man kicks a man in the head, knocking him down a flight of stairs, and a man kicks a man in the chest, knocking him off a balcony. A man punches a man in a kayak, knocking him off. A man hits a man twice in the head with a kayak paddle. A man kicks a man in the face 6 times. A man grabs and twists a man's finger.
► A man punches three men in the face, kicks several men in the face several times, knocks two men's heads together and walks on several men's faces. A man punches and kicks three men in the face and chest (the men fall down unconscious). A man kicks a fallen man in the side, throws another man to the ground, punches a man in the face and strikes a man in the face with a pipe.
► A man launches a rocket at a man, missing him and exploding a storefront. A man fires a gun three times at a man, missing him each time. A man with a sword attacks a man, but misses. Several children throw rocks at a man, which he catches.
► A man pinches the neck of a young boy, rendering him unconscious. A man attaches a piranha to his own neck to show he feels no pain, and a man puts a piranha down his pants to show he feels no pain.
► A man pushes a man off of his ski jet and into the water. A man flies off a ski jet when it comes to a sudden stop.
► Three men use a cat as a hacky sack (the cat appears uninjured). A man swallows live chicks. A man punches a cow. A man jumps, using a dog's head as a launching platform. A man mistakes a wig for an animal, and stabs it with a knife, he then beats, kicks, and tackles the wig.
► A man intends to detonate a bomb in order to kill several people and animals (he does not). Two men play ping-pong with a grenade. Men create a sonic disturbance that shatters windows, defuses a bomb, throws a man through the air and through a window, and causes several explosions.
► An angry man throws a bicycle. An action figure explodes in a TV commercial. Men fire automatic weapons at a target. A grenade explodes in the water (no one is injured).
► Men playfully tackle another man (he is unharmed). A man throws a shoe, hitting another man.
► A man explains that his family was hacked to death. A man describes the effects of having a slit jugular to a small child -- who proceeds to cry.
► A man vomits, spraying vomit from his mouth. A man urinates on a cat. A man spits in a man's face.

MESSAGE - People of all ethic backgrounds are regular people trying to make a living and should be respected and not feared. 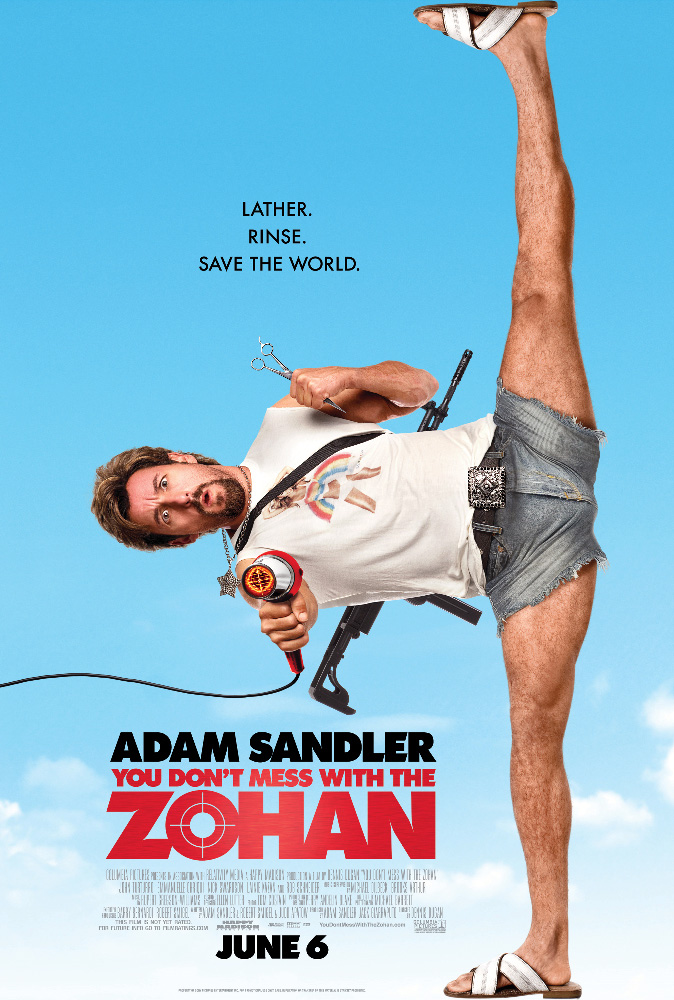