Why is “The Wretched” rated NR? The MPAA has not rated this film. The Kids-In-Mind.com evaluation includes a few implied sex scenes and kissing scenes and a few scenes of full back nudity and cleavage revealing outfits; several scenes of encounters with a demonic creature that seems to feed on children with a lot of blood shown and accompanied by unnatural creaking and squishing sounds, a few fight scenes with no injuries shown, a near drowning, a dog attack, a self-inflicted gunshot death, dead bodies with bloody wounds, jump scares, arguments and the gutting of a dead deer with a lot of blood and organs and squishing; and at least 5 F-words and other strong language. Read our parents’ guide below for details on sexual content, violence & strong language.” A teenage boy (John-Paul Howard) goes to live with his father (Jamison Jones) in a tourist town for the summer and work at a local marina. He soon begins to notice that the family renting the house next door seems sinister, and becomes alarmed when their young son disappears. Since adults don’t listen to teens, he has to fight the malevolent forest spirit that apparently can take over women and mesmerize men. Also with Piper Curda, Azie Tesfai, Zarah Mahler, Kevin Bigley and Blane Crockarell. Directed by Brett Pierce & Drew T. Pierce. [Running Time: 1:35]

– A wife straddles her husband in bed and we see her bare back and partial buttocks (sex is implied). A husband and his wife kiss passionately as a teen boy watches through binoculars; we see them press against the bedroom window and then see the curtains drawn (sex is implied). A man removes his shirt in his bedroom while his wife lies on a bed; he climbs into the bed and they kiss (we see the man’s bare back and partial chest).
► A teen boy and a teen girl hug and kiss. Teen boys and teen girls kiss in a beach party scene. A teen boy leans toward a teen girl to kiss her and vomits instead (please see the Violence/Gore category for more details). A woman kisses a man and he pulls away and leaves.
► A teen girl removes her clothes to go into a swimming pool (we see her wearing a bra and underwear that reveal cleavage, bare abdomen, back and partial buttocks); she entices a teen boy to join her and he removes his shirt and pants and we see him wearing boxer briefs (his bare chest and abdomen are shown) until she swims under the surface and comes back up with his underwear in her hand while other teens gather outside the pool mocking the boy (he climbs out of the water nude and we see his bare back, buttocks and legs) and runs away embarrassed.
► A fully nude woman stands in a hallway and when her young son finds her she runs into a room (we see her bare back, buttocks, legs and partial side of her breast and abdomen). A female figure is fully nude (we see her bare back and buttocks, and her arm covers most of her bare breast). A woman showers and we see her bare back (please see the Violence/Gore category for more details). A woman pulls down her pants to urinate in the woods (we do not see flesh and we hear a bit of a trickle). A teen girl is shown wearing a bikini top and short shorts that reveal cleavage, bare abdomen and legs to the lower buttocks. A shirtless boy’s bare chest and abdomen are seen. Teen girls are shown wearing bikinis in a few scenes (we see cleavage, bare abdomens and legs). A woman wears low-cut dresses that reveal cleavage, bare back and bare legs to the hips in several scenes.
► A teen girl calls her mother from a house where she is babysitting and the mother quizzes her about whether she is with a boy and that she doesn’t want her to get pregnant. A preteen girl tells a teen boy, “You’re not that cute.”

The Wretched SUBSTANCE USE

– Adults and the police will refuse to believe that wood demons that eat children are their neighbors, so teens have to assume the initiative and destroy them. 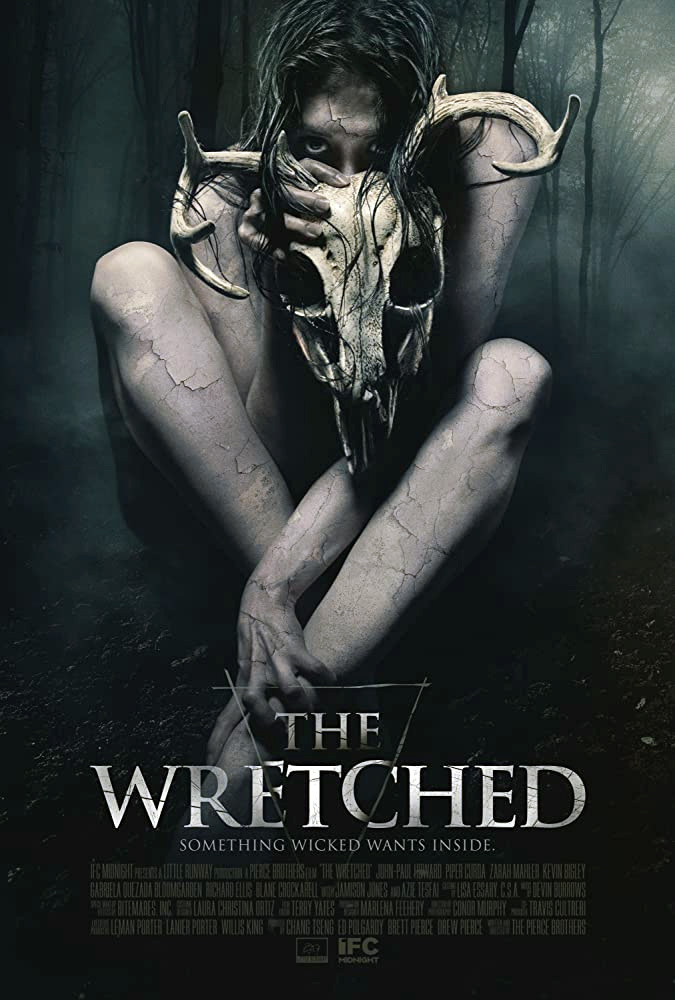