After the death of a friend, three young men (Seth Green, Matthew Lillard and Dax Shepard) vow to fulfill his dream of finding riches by following an old treasure map into the Oregon wilderness. When they take a canoe upriver, everything that can go wrong does: they run into dangerous rapids, and they're pursued by two backwoods farmers, some ardent female environmentalists, and a crazed old mountain man (Burt Reynolds). Also with Abraham Benrubi and Rachel Blanchard. Directed by Steven Brill. [1:33]

SEX/NUDITY 7 - Two women invite men to take off their clothes, one man strips to his boxers, the women help the other two get undressed (we see them with sheets wrapped around their waists and shoulders), and the women massage the men's shoulders. A woman kisses a man. A man and a woman kiss, he kisses her neck and they hug. A man and a woman lie in bed together covered to the shoulders by a sheet (presumably after having had sex) and they kiss. A woman pours buckets of water on another woman wearing a bikini top and a man watches through binoculars. A woman climbs on top of a coffin at a funeral and says, "I still want you." A woman in bra and panties lies on top of a man in boxers in bed, they wrestle around, then stop when they hear a noise that they suspect is the woman's husband; it turns out to be the woman's female companion, she enters the room, and the man invites her to join them. Three men lie on the ground together: one man talks about two women and imagines them being nude and dancing in the rain, another man presumably becomes aroused because a third man jumps up and yells about what he "felt." Three men hold each other close, lie on the ground and snuggle (it is to keep warm, but there's romantic music playing in the background). A centerfold poster hangs on a wall of a woman with opaque cloth draped over her; her bare breasts are visible and her crotch is diffused by the cloth. A woman wears a low-cut top that reveals cleavage, bare back and shoulders. Three men spend part of the movie running around in their underwear -- two in boxers and one in jockeys. A woman thrusts her hips while talking about watching a tree during a storm, and how the tree looked as if it was having an orgasm. A man says that he had sex with another man's mother when they were young. A man talks about being "manhandled" in prison. An answering machine message heard a few times states "...we're doin' it." A man talks about wishing he had a woman who was "willing to have sex with me." Three men talk about "hot chicks." A man makes fun of people who live in the mountains and says to a man, "you've got a pretty mouth." Three men talk about "snuggling up" to keep warm. A man says "I ate a Brownie once." A man bets a part of his anatomy that another man cannot catch a fish. There are many references to women's "downstairs." A man says to three men, "I'd dress faster if I were you. I've been in this cabin for 30 years." A woman shows her unshaved legs that are covered with bushy hair.

VIOLENCE/GORE 4 - Two men shoot up a shack with four men inside, one man shoots back, and hits a four-wheeler causing it to explode. Two men with guns chase and shoot at three men running through a heavily wooded area, flares are fired into the air setting a field of marijuana plants on fire, the men inhale the smoke and become inebriated, and two dogs inhale the smoke and pass out. A man has a bullet wound on his arm (we see a bloody gash), and another man stitches the wound with a needle and thread (we see the needle passing through the skin). A man targets a man's head and shoots but misses, then fires at another man who ducks out of the way of the bullet. A man shoots at a woman. A bear rears up behind a man, he and two other men run, the bear gives chase, one man falls, the bear turns the man over, sniffs his buttocks then picks the man up in its mouth and carries him to the woods. A man holds a gun on three men and threatens to shoot a part of their anatomy off and stuff and mount them. Three men hold guns on three other men, one man throws a grenade that explodes knocking all six men to the ground and a tree falls crushing three of the men. Two men on a four-wheeler chase three men on another four-wheeler, the three men ride off a ledge and into a river below. Three men fall into a hole, two other men find them and threaten to kill them, another man knocks the two men into the hole where they fight with punches and kicks, one hits another with a beam, one is slammed against a beam, and one bites another on the ear. A man grabs a man by the throat and squeezes. Two men throw sticks of dynamite into a river to catch fish (we see the men later cleaning the fish and one uses an axe to cut fish heads off). A bear brings a dead animal to a man for him to eat (we see blood and tissue on the animal), the man takes a bite of the animal (we hear squishing sounds) and we see red tissue pulled out of the carcass and blood on the man's mouth. Three men ride in a canoe down rapids, the water gets faster, they ride through low-hanging trees, they nearly hit a large rock, they are tossed out of the canoe, struggle to get back, and then ride over a waterfall. Two men slide across a rope, and one slams into a tree at the other end. Two men arm themselves with weapons and ride four-wheeled vehicles through woods to track three men. We hear that a man died in an accident and we see people gathered at his funeral. We see the skeletal remains of a person. Three men hide in a tree overnight while a bear tears through their camp below. A man pulls a metal pole out of the ground and threatens a man in a car with it, he then lunges at the car window causing the man to jump and panic. A man punches a man in the chest. A man makes sparks with rocks, another man spits alcohol on the sparks causing a flame to burst and the first man falls backward with a charred face. Three men hide under water using canes to breathe, a beetle crawls into one cane and a man coughs and gags. A man talks about his father hitting him in the head. Four boys jump their bikes over a ramp that is placed over a creek; one boy doesn't make it and crashes into the water (he appears uninjured). A man pulls out a pocketknife and threatens to cut a piece of another man's anatomy off (the man squirms and yells). A man pulls out a pocketknife and lunges at another man, threatening to prick his finger -- we hear the man yell off-screen. A man begins to cut a tree with a saw and he and another man are pummeled with bags of feces (we see them splatter on their heads and faces). A woman scratches a man's chest and kicks him. A man falls off a ladder and lands on the ground on his back. Two dogs eat fish heads (we hear squishing and snarling). Two men talk about "needing" to kill three men. A deer snarls and bares its teeth. Three men urinate off the side of a canoe (we see the streams). A man sticks his hand in a pile of bear feces to retrieve a phone.

MESSAGE - Don't let anything stand in the way of doing what you want to do or you'll regret it. 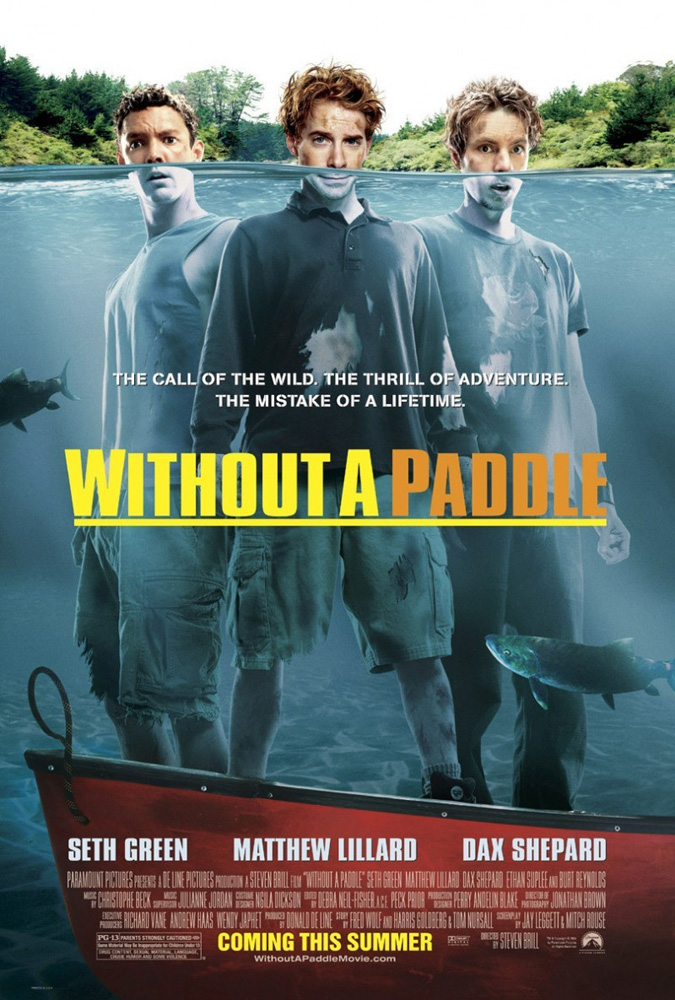