A 17-year-old girl (Jennifer Lawrence) is left raising her younger brother and sister, and caring for her incapacitated mother after her methamphetamine cooking father runs off. Before abandoning his family, however, he put their house up as his bail bond, and now his daughter must search the Ozarks for him, while avoiding her outlaw relatives, and before the bondsman seizes their house. Also with John Hawkes, Kevin Breznahan and Dale Dickey. Directed by Debra Granik. [1:40]

VIOLENCE/GORE 6 - An older woman throws a cup of hot coffee on a teenage girl's face, the girl screams in pain and the woman smacks her in the mouth with the mug; two other women grab the teenage girl, tackle her to the ground and kick her a few times before dragging her into a garage, and the teenage girl is later seen regaining consciousness -- her mouth, nose and eye are covered in dried blood, she spits out a tooth and blood into her hand, and we later see her with a healing cut on her eye and mouth after another teenage girl helps clean her up.
► A teenage girl is forced to hold the hands of a waterlogged corpse above water as an older woman uses a chainsaw to cut off the hands (we do not see the hands being cut off or any blood, but we do momentarily see the disembodied hands thrown into a boat by the older woman); then the older woman shouts at the teenage girl to feel around in the water for the corpse.
► A teenage girl uses a knife to partially skin a dead squirrel and she then instructs a boy to pull back the fur: the two of them pull back the skin, she draws a knife down the carcass' stomach and the boy pulls out blood-covered intestines. A man and a woman stand beside the corpse of a deer hanging from a tree, carving pieces of meat off the torso.
► A teenage girl throws a plastic grocery bag on a man's desk, the man looks in it with disgust, and it is implied the bag contains two disembodied human hands; the man says they will be sent the content off for testing.
► A teenage girl shows a 5-year-old girl and a 12-year-old boy how to aim and fire a gun; she is later seen holding a rifle, she asks the young girl to pull the trigger, we hear a shot and later see the teenage girl, young girl and boy carrying squirrel carcasses.
► A man and teenage girl in a truck are pulled over by a police officer: the officer and the man shout at each other, the police office pulls out his handgun and holds it so the man can see it, the man pulls out a large rifle and holds it so the officer can see it, the two pause and the driver says that he is ready to die and drives away. A teenage girl points a hunting rifle at two women telling one that she wants to blow a hole through her stomach; the woman tells the girl to come with her, the girl replies that she wants to bring the gun, and the woman puts a bag on the teenage girl's head, places her in a car and drives away.
► A man shouts at a teenage girl, and he pulls her arm as he pushes her towards a car; a boy comes out of a house, yells at the man and the man threatens to harm the boy. A man angrily whispers to a teenage girl and grabs her neck but lets go and storms off shouting.
► A man tells a group of men that he will beat them up if they do not help him find a man; the men threaten him, and he picks up a large axe and uses it to crush the windshield of another man's car as a teenage girl watches.
► A man shows a teenage girl the burnt remains of a house and tells her that a man had died in the fire and that she cannot investigate because the burnt remains are poisonous and would burn her skin away; the teenage girl looks at the burnt remains but does not find a skeleton. A man and a teenage girl look through a cemetery at night, as a man instructs the teenage girl to look for "humps in the ground" in order to find a man's body.
► A teenage girl tells a man that she would rather have a young girl and a boy die in a cave than go live with the man, and then spits on the man's foot (we hear her spit and see it come from her mouth). A teenage girl tells a man that she had fallen off her bike and injured her eye and mouth (she has scabs on her eyebrow and mouth, and her cheek is puffy).
► A teenage girl shouts at a man. A teenage girl shouts at a woman and a man on different occasions. An older woman admits to a man that she and two other women had beaten up a teenage girl. Men, women, and a teenage girl discuss the death of a man, including a man telling the teenage girl that if he finds out who murdered the man, he would be in trouble. A man tells a teenage girl that another man's car had been found, burnt out, but with no body inside.
► A man loads and unloads a gun sitting on a table next to a teenage girl. A large hunting rifle is visible in a man's living room. Teenage boys and girls walk through a high school gym carrying rifles in a military fashion for JROTC.

MESSAGE - Sometimes it takes a lot of courage to help those you love, especially if you have to fight against your own outlaw kin. There are places in the U.S. that remain almost primitive. 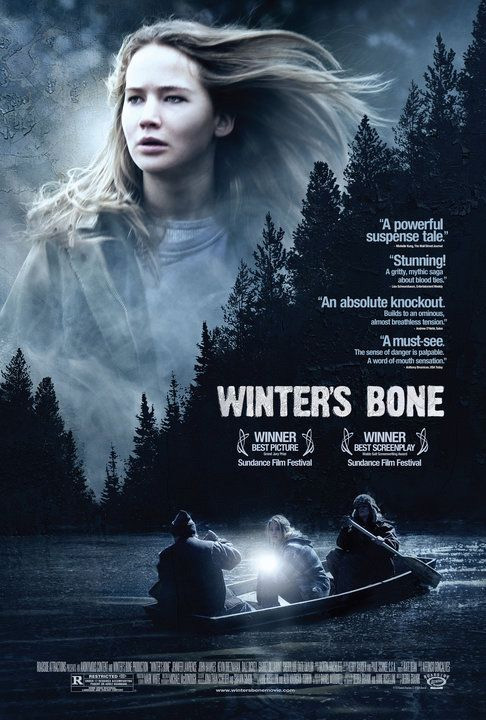