In a pre-World War I German village, inexplicable violent events begin to take place: some seem like accidents, while others are obviously designed to cause damage and even death. A schoolteacher determines that the culprits are the village children, who are abused by their parents, and whose reaction is to become violent themselves. With Christian Friedel, Leonie Benesch, Maria-Victoria Dragus, Leonard Proxauf, Levin Henning, Johanna Busse, Thibault Sérié, Janina Fautz, Enno Trebs, Theo Trebs, Ulrich Tukur, Burghart Klaußner, Rainer Bock and Ernst Jacobi. Directed by Michael Haneke. In German with English subtitles. [2:24]

SEX/NUDITY 6 - A man has sex with his housekeeper in a corner of the dining room: we see his back and hear muffled grunting, he steps away, and she zips up his pants and crouches down to reach under her skirt briefly (we see no nudity).
► We hear muffled panting and see a man's back and his 14-year-old daughter sits on a table with her long nightgown pulled up above her knees (sexual abuse is suggested); when her younger brother enters the room, she tells him that she is having her ears re-pierced.
► We see a man's back and the top of a woman's head as he stands in front of her in his office (the scene suggests oral sex, but it is not clear). A man and a woman kiss briefly.
► A wet nurse nurses a baby and we see the top of her bare breast. We see the bare legs and hips of a dead woman as two other women wash them.
► A woman tells a man that she sees him fingering his daughter sexually and he shouts at her. A pastor's son confesses to masturbation, and the pastor has the boy's hands tied to his bed frame every night as punishment. In a village, there are rumors that a midwife and housekeeper had sex several times with a married doctor and because of this had a "retarded" male child. A man tells a woman several times that she is disgusting and he can no longer have sex with her; she reminds him that they had sex while his wife was still alive and he repeats that she is disgusting and needs to leave his house. A wife tells her husband that she has fallen in love with another man, the husband shouts and demands to know if they have had sex, and she says that they have not. A German landowner says that the Polish workers have too many children, implying they have too much sex. An older man asks a teen girl if she would not prefer to have a suitor rather than to having to baby-sit children; she says no and walks away.

VIOLENCE/GORE 6 - A boy gets a long tree switch, and then we hear him and his older sister when they are each beaten behind closed doors. A man confronts his son about bullying another boy, and the man strikes the boy with a riding crop (we hear cries and screams).
► A developmentally-disabled 8-year-old boy is found bound, blindfolded and gagged, and tied to a tree in a forest: men untie him, we see that he was beaten and both eyes are black and bleeding and one man reads a note left on the boy, which states that the sins of the fathers will be visited upon the 3rd and 4th generations forward (we see the boy later being bandaged by a doctor.
► Two boys punch each other, fighting about sibling seniority, and a woman slaps one of them in the face. A boy and his father quarrel and the father slaps the son in the face.
► Two teen boys rough up another younger boy; one tosses him into a pond and steals his penny whistle, and the other pulls him out.
► We hear muffled panting and see a man's back and his 14-year-old daughter sits on a table with her long nightgown pulled up above her knees (sexual abuse is suggested). A pastor enters a schoolroom, grabs his daughter by her dress collar, and nearly slams her into the back wall, because she did not control the other children; he berates and insults her in front of the class and she collapses off screen.
► A wire stretched between two trees causes a man to fall from his horse; we see the horse writhing and then dead, lying on its side, and the man is shown on the ground as he shouts in pain and we later hear that he is in the hospital for 2 months and see him briefly with his arm in a sling.
► A man is found hanged in a barn by his son and we later see a coffin on a horse-drawn wagon, with a dozen grieving family members walking behind it. We see the bare legs and hips of a dead woman as two other women wash them for a viewing. We see a clothed corpse with a handkerchief over her face on a viewing table in a parlor; a small boy lifts a corner of the handkerchief and we see her cheek and lips.
► Throughout the film, a pastor states that people must be punished in order to be purified. A pastor's son confesses to masturbation, and the pastor has the boy's hands tied to his bed frame every night as punishment. A teen boy is told by his pastor father that defiling special nerves by masturbating leads to infection, shaking, boils and death, and the boy cries. A pastor shouts at his two older children for lying and announces that the entire family will have no dinner and that the older children will be caned 10 times each the next evening at the dinner table in front of the other siblings.
► A teen girl kills a parakeet off screen with the blade of a large pair of sharp scissors; we see the bird's owner discover the dead bird, with a blade run through from beak to tail, but no blood.
► A teen boy walks on a bridge railing, a teacher shouts at him to get down, and the boy says God does not want him to die. A girl tells a schoolteacher that she dreams of accidents and they occur; when two policemen yell at the girl repeatedly, she cries. A young boy asks his older sister about death and learns that everyone will die and his mother has died and is not on a trip; the boy smashes dinner plates to the floor off screen and we hear them shatter. A teen boy yells at his younger siblings to untie him from a bed where he is tied every night for punishment, so that he can report a fire.
► We hear that a teen boy is found hanged by his feet in a church, his pants pulled down, and his buttocks caned until bloody (we see a bundle carried from the church and hear that the mother and other son left town). We hear that a woman fell through rotting floorboards in a sawmill and died. We hear rumors spread that a housekeeper and a doctor conspired to murder his wife.
► A man confronts a pastor with evidence that the pastor's children are menacing the townspeople and the pastor shouts and threatens the man to remain silent or suffer legal charges and prison. We hear about the assassination in Sarajevo of Archduke Ferdinand, and the declaration of war on Serbia and other countries by Austria–Hungary.
► A large barn on an estate burns down; we see tall flames and men hand-pumping water to no avail.
► A woman and her son disappear and it is implied that they were either killed or may have run away.

SUBSTANCE USE - A man and a woman sip from glasses of wine during dinner, several people at a dinner sip wine, a man offers another man a drink and the second man declines, men at several long tables drink beer and a bystander says the men are all drunk (none appear to be), a line of people on their knees at an altar drink wine from the same communion cup, and a woman drinks a glass of sherry. One man smokes a thin cigar and another man lights and smokes a cigarette.

MESSAGE - Barbarism is learned in childhood, and it will have consequences lasting for decades. 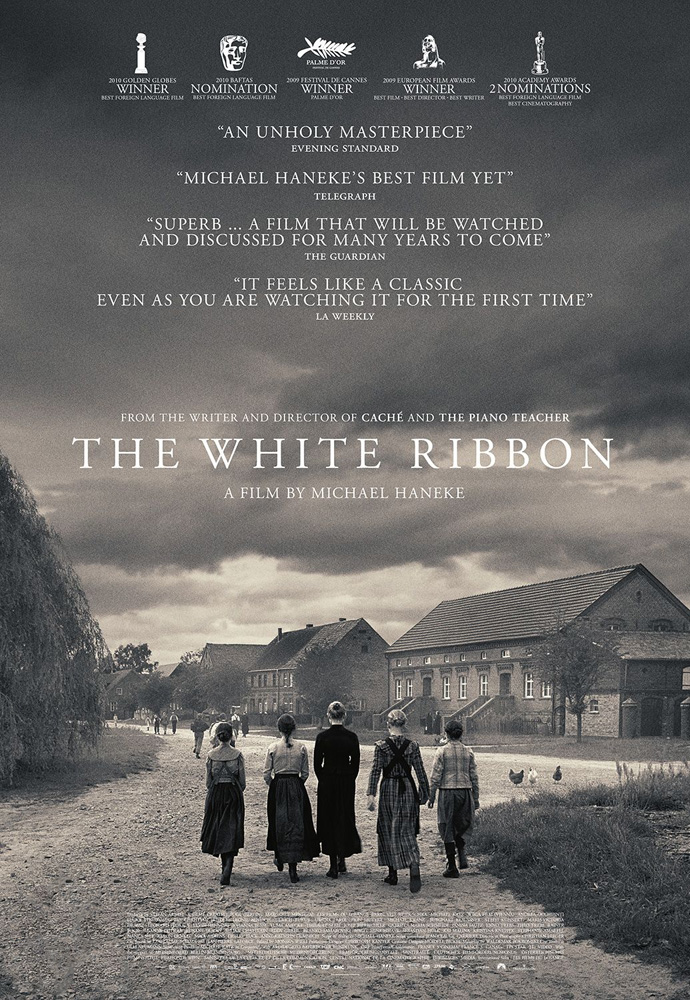