In rural Pennsylvania in 1897, the small village of Covington is surrounded by eerie woods that are rumored to be inhabited by vicious creatures. Afraid of what could happen to them if they went into the woods, the 60 or so residents remain in the village completely cut off from anything around them. Only one young man (Joaquin Phoenix) questions the policy of keeping Covington's citizens completely confined to their village. Also with Sigourney Weaver, Judy Greer, Bryce Dallas Howard, William Hurt, Adrien Brody, Brendan Gleeson and Bryce Dallas Howard. Directed by M. Night Shyamalan. [2:00]

SEX/NUDITY 2 - A man touches a young woman's face tenderly and they kiss; a man kisses a woman on the cheek. A woman confesses her love for a man, but he does not return the sentiment, and a man confesses his love for a young woman. A man and a woman step close to each other and they appear to want to kiss or touch, but do not. A man tells his mother that another man is in love with her. A young woman tells a man that she is, "free to accept interest from men." Men and women dance at a wedding.

VIOLENCE/GORE 6 - The creatures in the woods are very tall, they have long sharp claws, the face of a boar with tusks, and pointed spines on their backs and a bony rib structure on the chest. A man is stabbed in the stomach, he falls to the floor and is then stabbed in the chest (we hear him moan and see him twitch). A man dies: he moans, we see blood in his mouth and he twitches slightly. A young woman is chased by a creature, she hyperventilates and runs in terror, and the creature lunges at her twice and then falls into a deep hole where it lies dead. A young man on watch hears thumping on the door of a tower, he opens the door and sees a creature run past below; he rings an alarm bell and the people of the village run in fear to safe rooms under their homes. A creature approaches a young woman, and she is grabbed out of the way just before being snatched by the creature. A young woman enters the woods and is very frightened as night falls and she hears many eerie noises. Someone's hands are covered with blood. There are several scenes where we see dead skinned animals on the ground, sometimes with twisted necks and once we see two hanging in a doorway. The carcass of a creature hangs in a shed, and a young woman is frightened when she touches its claws. A young woman falls into a deep hole, she dangles from tree roots and pulls herself up. We hear about several people having been murdered: one was robbed and found nude floating in a river, one was shot in the eye, one was shot in his sleep, one was raped and murdered, and another was shot. A man walking in the woods hears branches breaking and a low grumble. We hear screaming, and then two children tell of having seen creatures in the village. A young man stands on a tree stump with his back to dark woods, we hear scary noises, and the young man is frightened and runs toward the village. Part of a butchered pig is tossed into the woods, presumably as an offering. We see eerie woods and hear frightening sounds (howling, low growls, creaking) coming from them. A young woman discovers a badly wounded man, she screams as she is dragged away from him and we see her top covered with blood. We see people gathered at the grave of a young boy who died from illness and his father grieves over the small coffin. A young woman slaps a man in the face repeatedly, he screams and cries. A man hits several others with a stick, and then wrestles with two others on the ground. A young man stands guard in a tall tower, with burning torches all around on the ground. People have locked boxes in their homes that "hold evils from their past." Red paint is splashed on the doors of the villagers' homes. People in the village appear nervous and frightened almost all the time. A man is threatened with time in the "quiet room."

SUBSTANCE USE - A woman holds a pipe in her hand.

MESSAGE - Love can inspire us to do the most extraordinary things. No good can come without sacrifice. 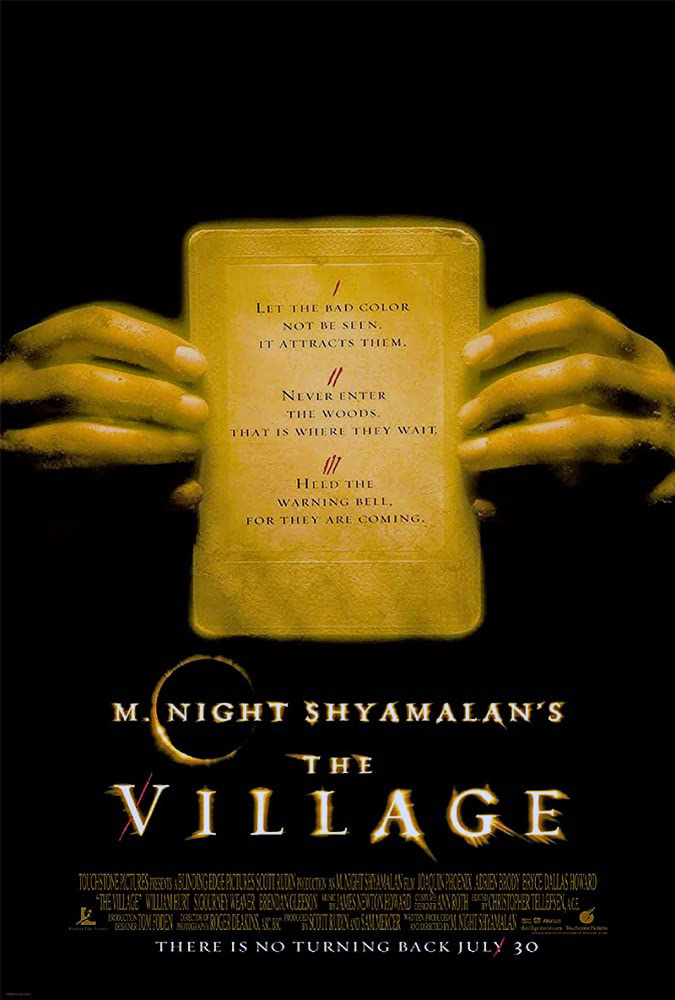