A well-meaning and very popular college student (Ryan Reynolds) is determined to stay an undergraduate forever. But while starting on his seventh college year, his father cuts him off and he's forced to turn to party planning to pay for expenses and tuition. Romance blossoms with a college journalist (Tara Reid) whose original intention was to do an exposé of the perpetual student. Also with Tim Matheson, Tom Everett Scott and Alex Burns. [1:35]

SEX/NUDITY 9 - Two young men are shown repeatedly rubbing a dog's genitals to the point of ejaculation (we also see young men eating eclairs filled with dog semen; see Violence/Gore below.) There is a running gag about a dog that has very large testicles (we see them repeatedly and people make remarks about them repeatedly). A young man flirts with an old woman; she licks her lips seductively, climbs on his lap, kisses him (we see her tongue), and we see her later with her blouse open, exposing a black lace bra; also, in a flashback to this scene we see her moving rhythmically and screaming while presumably on top of the young man having sex. A young man stands while an old woman kneels at his crotch; we hear her slurping, see her head moving in and out and he reacts with pleasure; oral sex is evidently implied but it turns out not to be what we think it is. A young man and woman have sex; he's bare-chested and is on top of her (she's wearing a T-shirt) moving rhythmically while describing everything in clinical terms, and we see him get out of bed and put on his underwear. A young woman takes off her bra and invites a young man to join her in bed; he rubs oil on her, and when he lunges he slips and lands on candles that set him on fire and he sails out the window in flames and lands in a pool of water below. A young woman is shown leaning over a bed while a young man moves rhythmically behind her. A young man and woman kiss and caress each other while she sits on his lap. A young man and woman kiss romantically a few times. Several young women show their bare breasts as rewards when young men get the correct answers on quizzes. Young men are shown at a strip club where women dance in thongs and bikini tops (we see several sets of bare buttocks); at one point a dancer wiggles her buttocks in front of a young man's face and flatulates loudly. A man puts his face in a woman's cleavage. A young man goes into a women's locker room and we see young women in underwear, with bare backs and in robes. A young man takes off his robe in a classroom (presumably an art class) and we see him bare to the hips (a young woman gazes down and reacts with interest). We see a young man without pants. Young women are shown in grass skirts and bikini tops at a theme party, and a group of young women in young men's underwear dance at a party and young men wear slinky nightgowns. A young man talks about wanting to have sex before he graduates from college and uses many euphemisms and hand gestures to describe what he is hoping for. Young women are shown in bikini tops and shorts that expose cleavage and bare thighs. A young man smokes marijuana from what he thinks is a bong but it turns out to be a sex aid. A group of blindfolded young men stand in their underwear (bare-chested) during a hazing ritual. A large man wears a bikini swimsuit. People line up in preparation for a "naked mile run" and we see men bare-chested, a man fully nude from the back and a young man takes off his pants while talking to a young woman -- we don't see anything below his waist, but she gazes down. There is a whole lot of sexual innuendo: references to the new "student bodies" on campus; a young man says he wants to "get his head in the right place" to start the new semester; a young man talks about having pain when he urinates; a young man says, "say hi to your gerbil for me" to another young man; a young man invites a young woman to dinner and states that "clothing is optional"; a young man counsels another young man on using protection during sex; two young men look at each other seductively; and a young woman dressed in a figure revealing outfit turns out to be a young man (we discover this when she speaks). There are references to virginity, masturbation and circumcision. There's an outtake reel that runs with the credits and it shows some additional sexual content: A young man sleeps with his face in a dog's testicles, an old woman licks her lips seductively and flashes her tongue at a young man, a young man kisses a young man's neck, and a young man picks his head up out of the lap of another young man in a car.

VIOLENCE/GORE 5 - In a particularly gross scene young men are shown eating and enjoying eclairs that are filled with semen donated by a dog; the filling drips down their faces and they lick their fingers, but they vomit when they realize what they have eaten. A young man stands on a rooftop and is apparently considering jumping; he is eventually accidentally pushed, we hear a splat when he hits the ground, and see him lying flat. A group of young men play croquet with other young men who act as the hoops and poles: we see these "hoops" and "poles" being hit hard by the balls and mallets. Young men play foosball with another young man's artificial eyeball. A car and a golf cart play chicken over a parking space; the car ends up ramming into the back end of another car and the driver spills his drink all over his face and shirt. During a hazing ritual, a group of blindfolded young men listen while they hear glass being broken in a garbage can; it is suggested that they are to jump onto glass with bare feet. A security officer points a gun at a man. A young man slams a door in a young woman's face, and a young woman is hit in the face by a locker door. A busload of children drives away and vomit sprays out of many windows. A young man's stomach reacts violently after he unknowingly drinks a laxative (called Colon Blow), he flatulates repeatedly and ends up having an extended, noisy bowel movement in a garbage can while in a room full of people. A young man (engaged in karate moves) hits his head on a cinderblock and passes out, and a young man flips over a railing and crashes to the floor. A man hangs from a rope outside a window, the rope breaks and we hear him hit the ground. A young woman pours a drink on a man's head, a boy spits on a young woman's shirt, and a large man in bikini swim trunks flatulates loudly. We see a young man with a variety of ailments throughout the movie: he has rashes, he has a huge lump on his neck, a large sore on his lip, etc.

SUBSTANCE USE - Young men and women are shown drinking alcohol to the point of inebriation, smoking marijuana and smoking tobacco throughout the movie, and one scene shows grade school children drinking alcohol and getting drunk.

MESSAGE - Don't take life too seriously. The future can be scary, but we mustn't be afraid of the opportunities that await us. 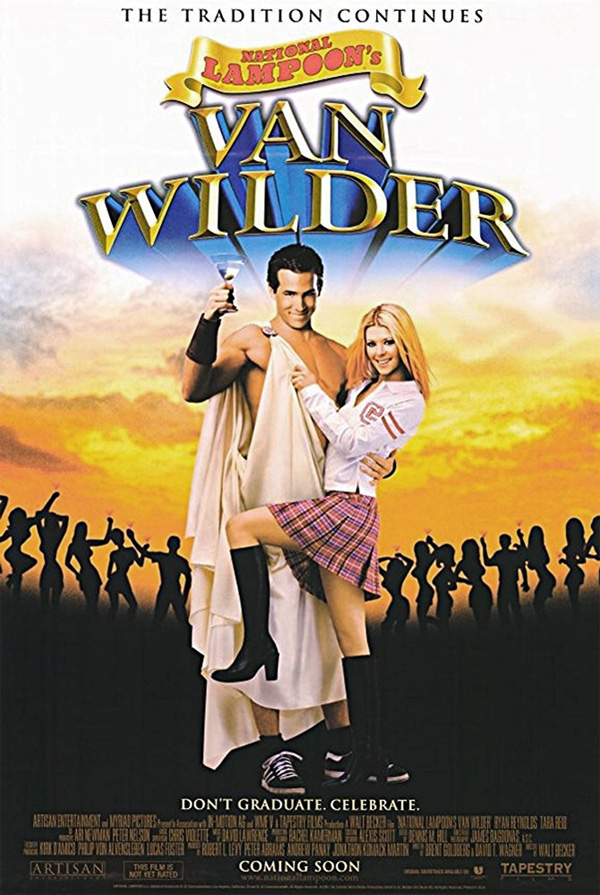