SEX/NUDITY 6 - A man lies in bed (his bare chest and back are visible), a woman climbs on the bed and stands over him (her bare legs are visible), sits on top of him, they kiss and it is implied that they spent the night together and had sex when she dresses behind a screen and he gets out of bed wearing boxer shorts.
► A man and a woman kiss, they roll over onto a bed and it is implied that they have sex. A woman says she's going to have sex with her boyfriend on Valentine's Day, she jumps in his arms, they kiss and it is implied that they have sex.
► A young man wearing only boxer shorts stands in a young woman's bedroom waiting for her (they have planned to have sex), holding a guitar and strumming it; he removes his boxer shorts (his bare chest, abdomen, hip and thighs are visible), her mother finds him, he panics and runs out of the house (his genital area and buttocks are covered by the guitar and his back pack).
► A woman lies in a bed wearing a short negligee (her bare legs are seen), a man in the room dresses, the woman gets out of bed and adjusts her negligee and the bottom of her bare buttocks are seen; the two kiss and he leaves. A woman sleeps in bed (she's wearing a low-cut negligee that reveals cleavage and bare shoulders) and a man sits next to her (he's wearing a T-shirt and boxer shorts). A woman falls onto the lap of a man seated on a couch and he holds her briefly while she rests her head on his chest. A man walks with a woman with his arm around her waist. A man is shown wrapped with a towel around his waist. A man jogs on the beach bare-chested. A man's lower back and part of his buttock cleavage is exposed briefly when his jacket rises up. Women wear low-cut tops and dresses that reveal cleavage in several scenes. Women are shown wearing yoga outfits that reveal cleavage, bare shoulders and abdomens.
► A husband and his wife kiss in several scenes. A husband and his wife kiss in front of a crowd and the crowd cheers. A young man and a young woman kiss passionately several times while being filmed for a news report. A man and a woman at a restaurant kiss across the table and other diners seated near them seem uncomfortable. A young man tells a young woman that they should go for a ride in his van (he has it fixed up for them to have sex); she says they should wait and they sit on the back bumper and kiss (no sex is implied). A young man and a young woman kiss in an elevator. A man and a woman kiss briefly, and then again more passionately.
► During phone sex calls, a woman uses different accents and describes sexual acts such as kissing, licking, sadomasochism (while making the sounds of a whip cracking), and sex with multiple partners. A man overhears a woman during a phone sex call, he is upset and walks away from her, and she says, "Will you call me"; he replies, "I don't think I could afford to." A woman tells another woman: "There's a guy on the phone asking me to cover him with Vaseline and bubble wrap." A woman makes a comment about someone on the phone having a fetish.
► A young woman tells another woman that she is going to have sex with her boyfriend, and the woman squeezes a soda can in her hand. A young woman tells an older couple that she and her boyfriend had decided to have sex for the first time. A young woman remarks, "It's not like I'm going to have sex with only one person for my whole life. That's crazy." A woman says that her only friend is her Blackberry and "thank God it vibrates." A woman asks a man to join her for a swim (he declines the invitation). A teenaged candy striper (she's hospital volunteer) asks an elderly man in a wheelchair if he's ready for his sponge bath and he says, "Yes, please." A voiceover states, "Let's get naked." A man and a woman talks about liking "make-up sex." A wife tells her husband that she was unfaithful to him with his business partner. A man tells a woman that the man she is dating is married. A woman makes a comment about her ex-boyfriend being gay. A woman tells a man that his neighbor thought he was gay but that she set her straight. A man tells a woman seated on a staircase that "Those stairs have never looked so good." A man tells a woman, "I'm a player." A young boy says, "I'm lovesick." A man says, "He's from Indiana where it is love your cousin day." A man tells another man that his wife "was hot." A man tells a woman that the man she is dating is married. Several people make references to relationships that have recently ended.
► A football player announces that he is gay at a press conference. A man caresses another man's face with flowers, and then caresses his hair lovingly.
► A toddler boy kisses a toddler girl on the mouth. A woman kisses a man on the cheek. A man kisses another man on the top of the head. A man and a woman hug.

VIOLENCE/GORE 2 - A woman yells at a man, hits him with a board and knees him in the groin, accusing him of being unfaithful.
► A man in a car crashes into the back of another car in traffic: the two men get out of their cars and one yells at the other (we see a dented fender and a bumper on the ground). A man in a van pulls into traffic and another man in a car swerves, honks and yells insults at him.
► A man stands up in an airplane and bangs his head on the luggage compartment (he's OK). A young man trips over a hurdle and rolls on the ground (he's OK). A woman is found lying on the floor in her office and two people panic when they find her (she's OK).
► A man yells in frustration in a few scenes. A woman describes the preparation of a dish in a restaurant as "chopping off the testicles and pulverizing them, then tearing out the heart…" An abrasive woman tells another woman that people call her bi-polar. A grade school aged boy talks about the Valentine's Day Massacre. A woman throws an "I hate Valentine's Day" party. A teen girl says that a teen boy used to shoot spit wads at her.
► A woman with a baseball bat pounds on a heart-shaped piñata until it comes apart. 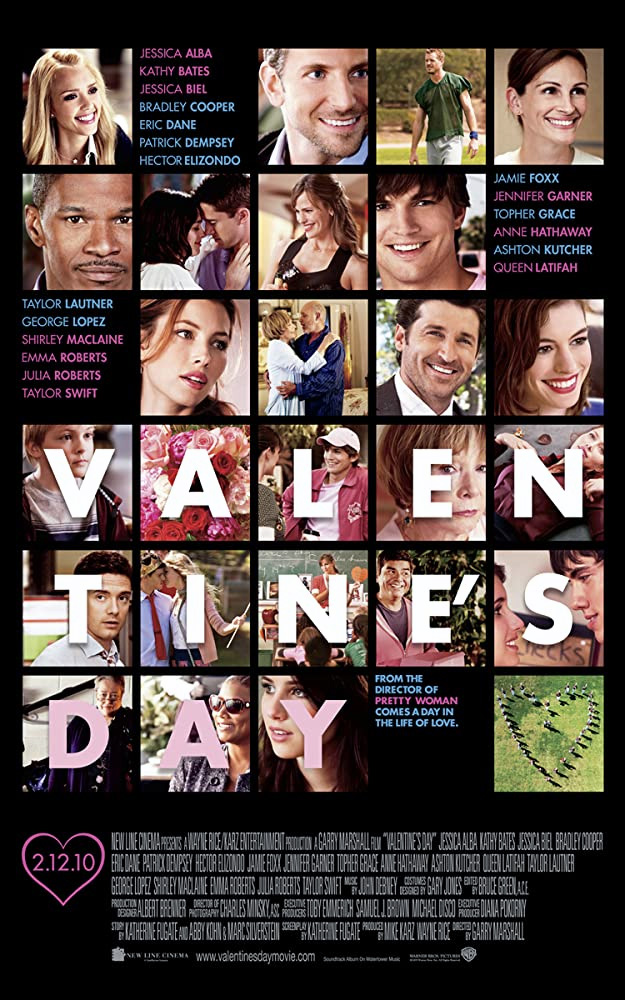