A man (Liam Neeson) suffers a head injury and awakens after a 4-day coma to realize that the life that he knew has been taken over by another man. He struggles to piece together the events leading up to the accident and to sort out his life, while it seems that he's also being followed by assassins. Also with Diane Kruger, January Jones, Aidan Quinn, Bruno Ganz and Frank Langella. Directed by Jaume Collet-Serra. [1:49]

SEX/NUDITY 5 - A husband flashes back several times to him and his wife kissing and caressing: one scene shows them showering together (her bare shoulders and upper chest and his bare shoulders are shown), they kiss and caress each other, they moan, and he caresses her face.
► We hear moaning and rhythmic thumping from an adjoining apartment through the walls and a woman says, "He never goes for long."
► We see a man's bare chest while EMTs perform CPR on him. A man showers and we see his bare shoulders, back and part of his chest. We see a photograph of a bare-chested man with many elaborate tattoos. A woman wears a low-cut dress that reveals cleavage, bare shoulders and back. A woman wears a low-cut tank top that reveals cleavage and the outline of her nipples through the fabric. Women wear short skirts that reveal legs in a nightclub scene.
► A husband and his wife kiss. A husband and his wife hold hands. A husband and his wife snuggle in the back seat of a taxi; she rests her head on his shoulder and he kisses her head. A wife sits on her husband's lap and he wraps his arms around her waist for a photograph. A husband caresses his wife's face and they hold hands. A man kisses a woman's hand. A man caresses a woman's face.
► We see men and women dancing together in a nightclub scene.


VIOLENCE/GORE 7 - A man snaps a woman's neck and drops her to the floor (we hear the crunch, see the action in a reflection and we see the dead woman lying on the floor with her eyes open).
► A bomb explodes as a woman attempts to deactivate it; we see the flash of flames engulf the woman and a hotel crumbles causing two men to be struck by falling debris (one has a bloody face). We see a video of a suicide bomber blowing himself up in a crowded room (injuries are not evident, but we see flames erupt and people fall to the floor).
► A woman drives a car and pins a man between the car and a van while he shoots at her; she strikes the man twice (we see blood on his face and we see him dead later). A woman drives her car into the back of a van and pushes the van over the side of a raised parking garage, the van explodes on impact and the man inside the van is presumably killed.
► A woman jabs a man in the neck with an injection of what is presumably a poison, and he twitches and dies. A man drinks a cup of coffee that has been laced with cyanide; he flinches, falls to the floor gasping, gets back up, falls into a man's arms, then a chair, takes his last breath and dies.
► A man enters an apartment, grabs a woman around the throat and she falls unconscious; he prepares to inject her in the neck, then holds a gun to her face and another man enters with a metal bar and starts swinging at him. Two men fight, one man throws the other into a table that breaks, one presses his thumb into the other man's eye, they punch and kick each other repeatedly, they break through a wall, fall on a bed where a couple lies, and continue fighting.
► A car swerves on a busy road when a refrigerator falls off a truck and onto the roadway, a motorcyclist falls off his cycle and onto the road, the car swerves again and drives through a guardrail and off a bridge into water below; the driver breaks her window and swims out of the car, her passenger has a bloody head wound from striking the window and is unconscious, and the driver breaks the back window and pulls the man out (he seems dead).
► Two cars speed through busy roads and along a sidewalk causing other cars to swerve out of their way and crash, as well as people to jump out of the way: one of the cars gets out of the way of an oncoming streetcar just before being struck, one of the cars is struck by a truck causing it to spin around several times, the truck dumps its contents (kegs of beer) onto the roadway and one onto the windshield of the car, and one of the cars ramps and flips onto its side and then onto its roof and is in the direct path of a streetcar that crashes into it just after the occupants of the car get out; we see one of the drivers with a bloody cut on his head. A woman drives erratically through airport traffic and pedestrians causing people to jump out of the way.
► Two men fight: one draws a knife, they punch and kick each other and one is slashed on the arm and stabbed in the throat with a shard from a broken mirror (we see blood spurt from both wounds). A man punches another man in the stomach and throws him to the ground; he kicks him and strikes him in the head with a gun butt, holds a gun to his chin and is prepared to shoot him. A man is tasered on the neck and forced into a van by another man.
► A dead woman is dragged by the arm out of a room and placed in another room where there is another dead body (no wounds or blood are visible). We see a dead man lying on a flight of stairs with his eyes open (no blood is evident).
► A man, still partially sedated, runs through a hospital corridor chased by another man that runs into hospital staff and several patients on stretchers. A man is restrained at the wrist to a stretcher, he pulls against the restraint and we see his wrist bleed.
► A woman slaps a man in the face and yells at him. A man becomes angry, yells and collapses. A man yells at another man.
► An alarm sounds in a crowded hotel and people are evacuated; the hotel explodes causing rubble to fall and we see piles of rubble and wounded people on stretchers (no wounds are visible).
► A man is nearly struck by a car and the car screeches to a halt. A man is afraid that he is being followed in a train station, he runs, the man behind him runs also, he gets on a train and the doors close as the other man tries to get in. A security detail pushes a man and escorts him out of a room. Security officials hold a man and a woman.
► EMTs perform CPR on a man who was pulled out of a river after a car crash; they use paddles and zap him twice. We see a man in a hospital room on a breathing machine and with an IV and we see that he has a bump on his forehead. A man removes a bandage on his head and we see a healing gash.
► A woman talks about her family having been slaughtered. A woman says, "They'll kill us both" about the people that are chasing them. A doctor tells a man that his heart stopped for several minutes and he was in a coma for 4 days.

SUBSTANCE USE - A nurse injects a sedative into a man's IV port, a man injects something into a man's IV port and a man puts a powder in a cup of coffee and drinks it (it's cyanide). People drink champagne at a reception, a man drinks alcohol then coughs and gags and people hold what are presumably alcohol beverages in a nightclub scene. A man smokes a cigarette in a couple of scenes, and a man says, "I smoked 60 a day."

MESSAGE - Losing your memory may change you as a person. 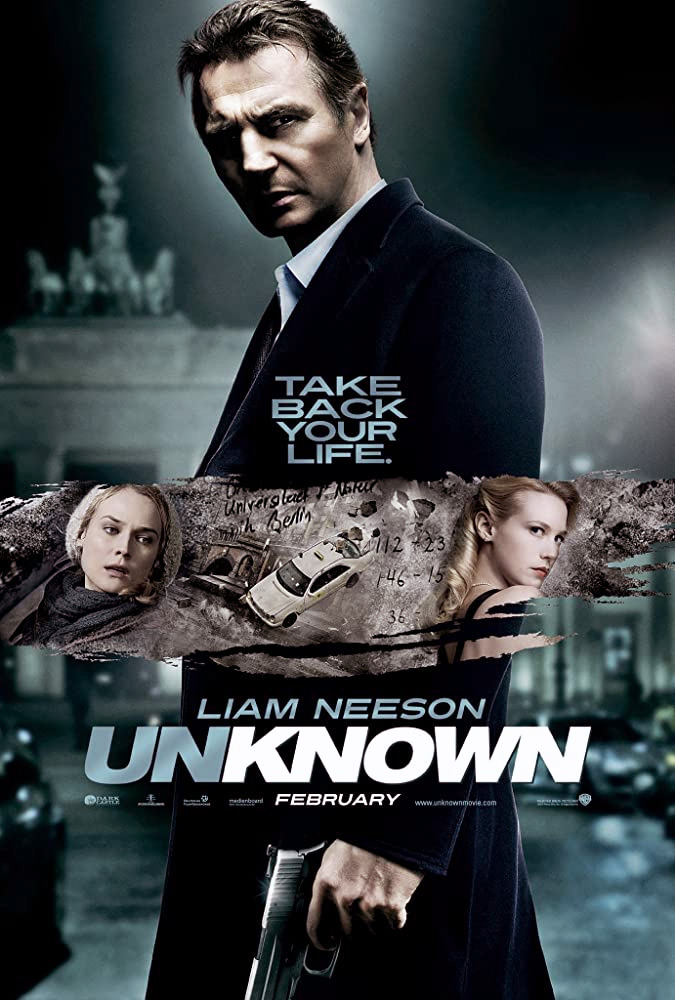