It's Christmas Eve, and a group of young teens and children who are unaccompanied by adults are stranded in an airport when all flights are cancelled due to a blizzard. Running away from the Christmas-hating airport manager (Lewis Black) and the airport security guards, the unaccompanied minors wreak havoc in the name of true holiday spirit. Also with Wilmer Valderrama, Dyllan Christopher, Gina Mantegna, Quinn Shephard and Tyler J. Williams. Directed by Paul Feig. [1:29]

SEX/NUDITY 1 - A girl kisses a boy and he tells her that she is so "hot." A boy looks at a girl and appears to be smitten. A boy and a girl hold hands.
► A girl sits on a Santa's lap, she pulls down his beard and says, "you're hot."

VIOLENCE/GORE 3 - People slide down a hill on various items (a canoe, a mattress, a suitcase, a BBQ grill lid, etc.), speed out of control, and several men crash into trees -- one man crashes head first into a snow drift -- and are thrown into the air when they go over a pile of snow; one man crashes into a parking lot bumper bar and is thrown into the air, another man sails off into the darkness.
► A dog bites a man on the buttocks and then in the crotch (the man yells and his voice goes up an octave).
► A girl punches a man in the stomach, and a man punches a man in the face (we see his bloody nose and lip afterward). A girl punches a boy in the crotch, and he falls to the floor in agony. A girl sits on a department store Santa's lap, and when he puts his arm around her in order to pose for a photo, she gets up and punches him in the stomach. A man slaps another man in the face.
► A man is tackled by many children and they pile on top of him. Two girls fight, and a boy trying to stop them is sandwiched between them.
► A boy hides in a suitcase, the case is pushed onto a conveyor belt, it slides down ramps and chutes, and a girl follows the suitcase.
► Children climb through air vents (one girl is afraid of small spaces), and one boy breaks through the vent and the ceiling and falls to the floor below (he is not harmed).
► A girl drives a golf cart through an airport, and she is chased by security guards on foot; she crashes into displays and other children climb onto the cart as it goes along.
► Children hide from airport security in a luggage processing area, they run through shelving, and one large guard is trapped when he tries to crawl through and gets stuck.
► A man starts a chainsaw and walks toward another man, scaring him (he is not threatening him). A man yells at 5 children in several scenes, and a man yells at a car.
► We see a completely trashed room with many children of different ages throwing food at each other and fighting. A car slams on its brakes sending the tree that's tied to its roof into a parked car windshield.
► A boy puts on a life vest, he pulls the fill cords and it fills with air pinching his face and neck. A boy faints a few times and a man also faints.
► A girl does a forced "extreme makeover" on another girl, painting her face and braiding her hair. A boy flatulates.

SUBSTANCE USE - A woman wakes up in a stupor holding a nearly empty bottle of alcohol. Children eat and drink many things containing sugar.

MESSAGE - It's OK to not pay attention to adults and do whatever you want to do when you are stuck in an airport on Christmas eve. 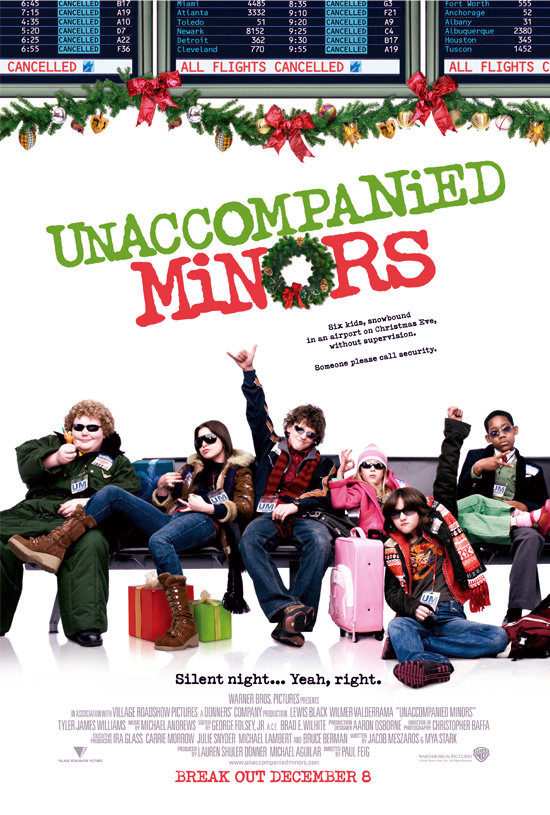