Sci-fi action film set in the late 21st century: a subspecies of humans with super human physical attributes has evolved due to a genetic mutation, but the government wants to destroy them and treats them as outcasts. Enter Milla Jovovich as Violet, aka V, a super-stylish and super lethal warrior out to get revenge. Also with Cameron Bright, William Fichtner, Nick Chinlund and Sebastien Andrieu. Directed by Kurt Wimmer. [1:25]

SEX/NUDITY 3 - A nude woman walks through a scanner -- it is very dark but her bare back, legs and buttocks are visible. A woman's outfits are skin-tight, usually short tops that reveal cleavage, bare abdomen and the outline of her buttocks. During the opening credits there are numerous drawings of women wearing skin-tight suits, some very low-cut or very short-waisted, that reveal cleavage, bare abdomens, bare backs and bare shoulders.
► A man professes his love for a woman.

VIOLENCE/GORE 7 - Long metallic probes poke a woman to test her identity: one probe is inserted in her eye while another holds the eyelid open (we see the needle enter the eye); another pokes a hole in her wrist and draws blood (we see the insertion and hear a crunch and see blood filling a vial) and another pokes down her throat.
► A character is shot with a weapon that causes him to burst into flames; he is then slashed by a sword and cut in half from head to toe, and we see the two flaming halves fall individually to the floor.
► A man and a woman with swords fight, one is slashed on the arm (we see blood), and blood splatters on the man's face; they fight in the dark with flaming swords, and there are slashes on one of them that are in flames. A woman slashes a man and he falls to the ground.
► A woman is attacked by many people with swords, there is slashing and several are run through -- one is stabbed through a facemask. A woman's hands have been cut by the blades of her swords and we see blood dripping from the wounds (she cauterizes one hand using the hot metal of her gun).
► Five large balls are dropped from a flying vessel: the balls crash through the windows of a tall building, they roll through the building crashing into furniture and through walls and when they stop warriors with swords appear out of the rubble and slash five people in a laboratory (no blood is shown but we do see slashing swords and hear slashing sounds). Many people line up to fight a woman, they shoot at her, and she kills them all with swords. A woman fights with many armed people shooting many of them in many scenes (no blood is shown).
► A woman jumps from a roof, lands on her feet on the ground, is surrounded by many armed people, her arms morph into swords, and she slashes them all instantly -- we see them lying in pools of blood. Many people with swords charge a woman, she slashes them all, others enter, she fights them with her swords and stabs one up and through the chin (we see the glistening blade through his mouth). A man with a gun approaches a woman, he shoots at her, and she gets the gun and shoots many others and slashes yet others with a sword. A woman fights many and wipes them all out (no blood is visible).
► A woman fights with several men using swords and kicks, we hear bones cracking when she twists their arms, one man shoots at her, she takes the gun away and uses it to beat several other men (there is no visible blood but their protective vests shatter like glass when they are hit).
► A woman is surrounded by many people with guns, many shots are fired, and the woman dodges the bullets -- other people are struck by the bullets (we see one man hit in the eye and we see blood spurt). A man kicks a woman onto the ground and then shoots her (we see her body flinch and she grunts). Five warriors with swords are shot by many armed people. A man is shot (we see him react to the shot) while a woman talks about her unborn baby and her husband being dead. We hear a gunshot and see a boy lying on the floor motionless.
► We see a woman lying on the floor in a pool of blood. A boy is tied by ropes over a well, he is dropped, and a woman grabs the rope and her hands smolder. A woman injects herself with something.
► A woman fights with two men who have very long hair: she uses their hair to hold and twist them and ends up pulling some of it out while punching and kicking them repeatedly. Several people shoot at a woman.
► A boy jumps into a car, a woman jumps on top of him and many people outside the car open fire on them; the woman starts the car and drives into several of the people (they are tossed into the air like bowling pins). A woman on a motorcycle races off a roof, lands in a helicopter mid-air, rides through the helicopter, out the other side and into a building as the helicopter explodes behind her. A woman on a motorcycle races along the walls of buildings while being chased by flying vessels and cars on the ground, and they shoot at her repeatedly.
► A boy is strapped to a table with what looks like frost on his skin. A boy falls off a merry-go-round and onto the ground: he looks very weak and lies motionless.
► A man talks about a woman having almost died four times while on the operating table. We are told that people who have acquired a disease must wear identifying clothing so that others may avoid them and we see people in several scenes wearing armbands and facemasks. A woman yells at a boy and shakes him by the shoulders.
► During opening credits we see drawings of women fighting with people using swords and body blows (no blood is visible) and one such drawing looks like it features zombies (they have grey-tinged skin). A woman vomits.

SUBSTANCE USE - A woman injects herself with something.

MESSAGE - Revenge can be bloody.

(Note: Although unclear what the symbolism is, there are many things that take the shape of a Christian cross: a large complex of buildings, a passageway, two flaming swords, etc. and one vampire talks about having prayed.) 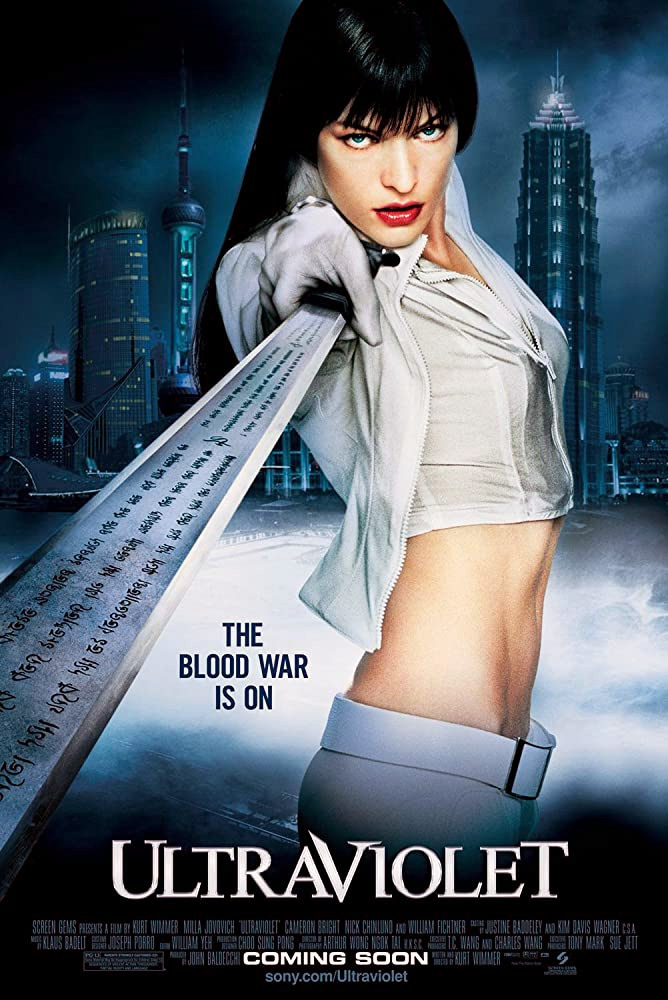