Why is “UglyDolls” rated PG? The MPAA rating has been assigned for “thematic elements and brief action.” The Kids-In-Mind.com evaluation includes a couple of flirting scenes and references to appearance, several scenes of aggressive acts toward those considered less worthy, a fight scene, scenes of peril and risk-taking, and some mild name-calling. Read our parents’ guide below for details on sexual content, violence & strong language.”

Animated feature about Uglyville, a town of unconventional looking dolls that don’t fit into any definition of physical perfection, designed by an unseen creator. When they decide to try and see what else is outside their town, they redefine what perfection really is. With the voices of Kelly Clarkson, Nick Jonas, Janelle Monáe, Blake Shelton, Pitbull, Gabriel Iglesias, Wanda Sykes, Leehom Wang, Charli XCX, Bebe, Lizzo and Emma Roberts. Directed by Kelly Asbury. [Running Time: 1:27]

– A dog doll flirts with a girl doll and lays a table with a bottle of champagne, and the girl doll says, “Hard pass.” Dolls in a large audience cheer for a singer on a stage as he throws kisses to some of them.
► We hear a female doll voice in an audience call out to a male doll, “I wanna run your gauntlet, Lou.” A doll says, “My pants are tight, but I like it.”
► A doll sings a song with lyrics that include, “Are your glutes as tight as mine?” accompanied by a picture of the Coppertone baby with her bare buttocks exposed. We see a painting of a shirtless male doll riding a horse. A plush doll wiggles its hips toward another doll, jokingly.

- Dolls living in Uglyville are shown with a variety of variations, like three eyes or one eye, one eye with an X stitched where the other eye should be, a floppy protrusion on the top of the head, missing teeth, etc.; also, one cat doll speaks only gibberish, a unicorn doll has one eye, a large doll with one eye has sharp teeth, etc.
► Two dolls are thrown into a recycle room where a large device with giant metal teeth chomps as the floor under them moves them toward it, and they try to get away from it and several other dolls come in to pull them out to safety. A doll grabs a knitting needle and runs onto the roof of a building and through an open area and fights with another doll before jamming the needle into a glass portal breaking it. A giant robotic dog grabs dolls in its large metal jaws as they try to move through a house with many obstacles (we don't see permanent damage); a doll is sucked into a vacuum (we see a lump in the bag and another doll lets her out), a large box falls on a doll pinning her to the floor, a motorized plow picks two dolls up and they drive down a flight of stairs (no one is harmed), and a giant robotic baby picks two dolls up in its hands and cries when one doll kicks it in the face. A doll is held in a robotic dog's jaws as other dolls yell out, "Tear the stuffing out of him."
► A doll slashes another doll on the back with a permanent marker (we see a black stripe). Three dolls sneak through a town, into a doll's home and kidnap the doll; the doll is placed in a burlap sack and its ears stick out, it uses them to slap one of the kidnapping dolls in the face, and then runs away and knocks itself out when it steps on a rake and is struck by the handle. A doll talks about crushing the dreams of other dolls. A doll tells another doll, "You don't belong here. You don't belong anywhere. You shouldn't even exist." Several dolls are shown being tossed in a large washing machine several times when they get messy (splattered with glue, splattered with paint, muddy, food, beverage spills, etc.). A doll tears pages out of a book and yells in frustration. Two dolls are dragged through a tunnel in a bag and are let out to be thrown into a recycle bin.
► A dog doll with a rope is tied around it grips onto the entrance of a tunnel with its teeth while other dolls climb up the rope. Several dolls run through a dark tunnel to try to see what's on the other end until they fall a long distance and land in a place with many other dolls. A doll pulls out several transportation toys that break; a helicopter blows up (no one is harmed), a trampoline has torn fabric, etc. A doll being processed through a check-in area causes the scanner to explode as we hear the voice say, "Tell my family, I..." A doll is thrown into a recycle bin. A shark doll chews up the end of a table where other dolls are seated (no one is harmed). A doll making factory shows dolls moving along a conveyor belt and when one that is not exactly the same as the others is scanned it is pushed off the line and it falls through a long chute and it lands in Uglyville. A doll drags another doll by the arm. Dolls bounce off each other (no one is harmed). A girl doll runs into a tree and a wall and a door a few times when she doesn't wear her glasses. A video shows a little girl watching a movie and she startles at a dragon she sees on the screen.
► We see many dolls in training in the "Institute of Perfection," where they are trained to be perfect before they can be assigned to a person. In an effort to make "less than perfect dolls" pretty, we see them wearing makeup, wigs and being squeezed into corsets and shapers. A town of dolls is shown to be gray-tinged when they are all sad and feel hopeless. A doll asks for a bag to put over its head. A doll says, "Let our freak flags fly."
► A doll yells, "Bleh," and acts like it is vomiting (there is no vomit). Several dolls squirt glue on themselves and each other (we see them covered with white glue). Dolls seated around a table throw cupcakes at each other after one calls, "Food fight." Ice cream is launched through the air and it splatters on a doll. A bucket of dirty water falls on the head of a dog doll.

- A doll says, "I need something stronger than this soup."

- Being different makes us special. 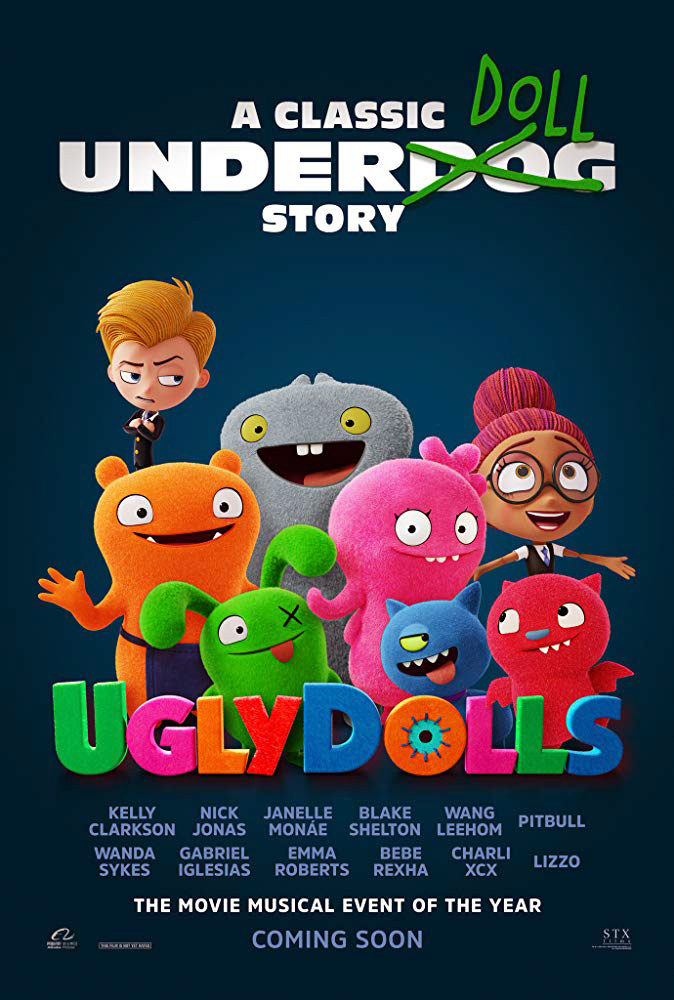