South-African drama and Oscar winner for Best Foreign Language Film: A South-African teen from the Johannesburg township of Soweto, whose name, Tsotsi, actually translates as "thug," muscles his way through life stealing from and brutalizing his victims. But he discovers empathy one night when, after stealing a car and shooting the driver, he discovers an infant in the back seat. In Tsotsitaal with English subtitles. With Presley Chweneyagae, Mothusi Magano, Kenneth Nkosi, Zenzo Ngqobe and Terry Pheto. Directed by Gavin Hood. [1:34]

SEX/NUDITY 4 - A woman's bare breast is visible while she nurses an infant, we see part of a woman's bare breast as she nurses an infant and an infant boy's genitals are visible briefly during a diaper change. Women wear low-cut tops that reveal cleavage in several scenes. A young man is bare-chested and wearing boxer shorts and a young man is shown in a tank T-shirt and boxer shorts.
► A man and a woman hug and men and women dance in a club scene.
► A young man makes a crude sexual remark to a woman about her crying infant.

VIOLENCE/GORE 7 - Four young men watch an old man on a train, they surround him, one pulls a weapon (it looks like an ice pick), stabs the man through the heart, and he groans, gasps and slumps (we see a small amount of blood on the man's shirt); when the train empties we see the man lying on the floor dead.
► A young man hits another young man in the face, then kicks him and punches him repeatedly (we see the victim on the floor twitching, with a very bloody face and we see him later with his eye swollen shut).
► A young man steals a woman's car, shoots her in the stomach and drives away (we see blood on her dress).
► A young man breaks a bottle then cuts his arm with a shard of the glass (we see blood trickle as the wound opens).
► Three young men hold a gun on a man, they force him into his house and tie him to a chair, and one young man holds a pointed weapon to the man's face and wants to kill him; the young man then pulls the trigger of a gun while pointing it at the man (no bullet in the chamber), he prepares to fire again, and he is shot in the back (blood splatters and we see blood pool under the body on the floor).
► A young man bumps into an old man in a wheelchair, who yells at him and spits on his shoe; the young man follows him through dark streets and acts in a threatening manner, and the old man throws rocks at the young man, who pulls a gun (the old man says that he emptied his bladder in his pants). A young man holds a gun on a woman, she threatens him with scissors, and he forces her to nurse an infant.
► A young man talks about someone kicking a dog so hard that he broke its back and we see this scene acted out (we hear the crunch from behind a wall, we hear the dog whimper, and we see the dog pulling itself along the ground).
► We see a woman cleaning wounds on a young man's face and she talks about them being infected. We see a woman dying from AIDS with sores on her face and around her mouth.
► Police with guns drawn surround a young man (although tense, there is no bloodshed in this scene). Police barge into a shack and hold guns on a young man who's in a bed.
► An infant is covered with ants, he cries, a young man struggles to get the ants off his face and squishes them. A young man changes an infant's diaper (we see the soiled diaper). We see sewer drain segments stacked in a field and children huddle inside them and sleep. A young man vomits. A baby flatulates several times.
► A young man talks about two other young men being shot and killed. A man talks about having been in a mining accident and that a beam fell on him and "broke him."
► A kidnapped infant cries in several scenes. A young man remembers running in fear through a field when he was a boy.

SUBSTANCE USE - People drink alcohol in a club, a man drinks alcohol from a bottle, young men drink alcohol and smoke cigarettes in a few scenes, and people smoke tobacco and drink alcohol. A young man smokes.

MESSAGE - People can change and they can be redeemed even after leading a brutal life. 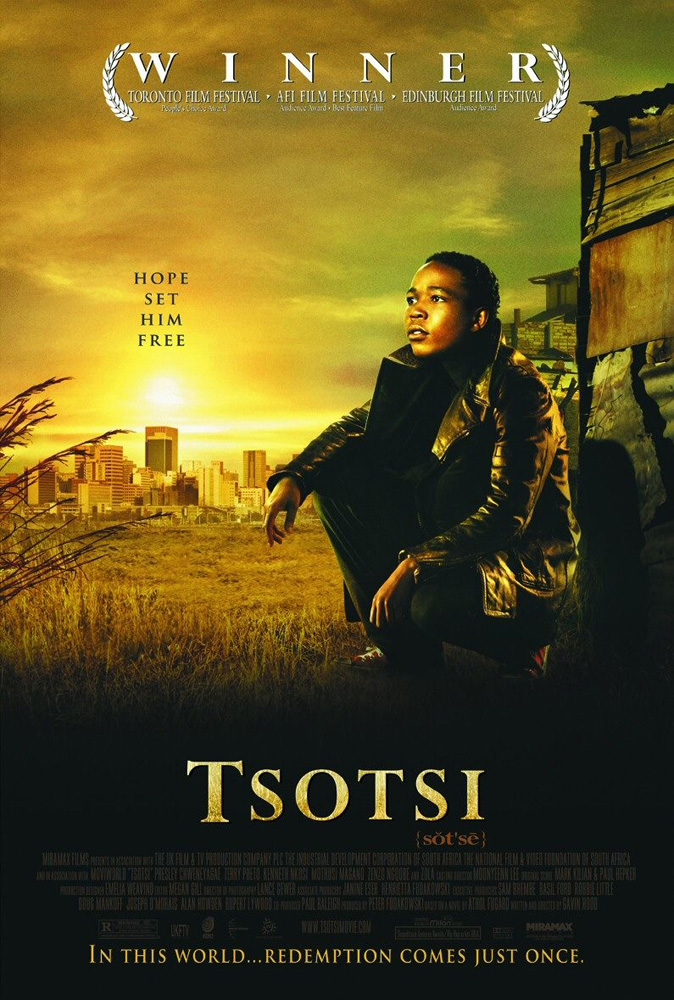