Why is “Toy Story 4” rated G? The MPAA rating has been assigned without qualification. The Kids-In-Mind.com evaluation includes a couple of hugs between dolls, several scenes of peril where dolls fall and take risks, speed in vehicles, a scene of an operation leaving a doll with stitches, several scenes of sad separations, a few arguments, and some name-calling and exclamations. Read our parents’ guide below for details on sexual content, violence & strong language.” In this sequel two action figures (voiced by Tom Hanks and Tim Allen) and several toys take a road trip with a little girl (voiced by Madeleine McGraw) and an animated spork (voiced by Tom Hale) that escapes from the car. The adventurous trip culminates in an unexpected reunion with an interesting old toy in a shop (voiced by Annie Potts) and involves some life-changing decisions. Also with the voices of Keegan-Michael Key, Jordan Peele, Christina Hendricks, Keanu Reeves, Ally Maki, Jay Hernandez, Lori Alan and Joan Cusack. Directed by Josh Cooley. [Running Time: 1:40]

– A male action figure and a female doll stare at each other and almost embrace, but do not and in a later scene, they embrace twice. A female doll embraces a male doll and twirls him around. A plastic fork doll falls in love, staring and open-mouthed, with a plastic knife doll in the end credits.

– Five dolls back another doll against a wall and he points a sharp pencil at them; he agrees to give his voice box to one doll and the camera cuts to him lying on a sewing machine and we see stitches in his back (we hear that his voice box was removed).
► In three scenes in their imaginations, a plush bunny sewn by one hand to a plush baby chick jump into the face of an old woman, causing her to screech, bump into walls and break vases. An imagination scene shows a pair of plush dolls jumping into the face of a carny, shooting lasers from their eyes, growing into giants and shooting more lasers to form small fires on the ground as the carny runs away.
► Four gangster dolls kidnap a doll and a talking fork in an antique shop and another doll tells them that she will take them to someone in exchange for the doll’s voice box; the doll escapes with a little girl as the gangsters give chase.
► A doll sees a young girl lost at a carnival, standing in a dark corner, crying and the doll walks nearby and sits down; the girl picks her up and finds a police officer to help her find her parents.
► A little boy drops two dolls on the ground, and they roll down a hill to where a toy car is waiting (it is in the shape of a skunk); a toy drives it recklessly through some trees, but no one is hurt and people run to get out of the car’s way. A doll jumps out an RV window and lies in a twisted heap on the pavement, but is OK. A doll jumps out an RV window and sticks in some dirt by the tines on his head. A doll jumps out an RV window, sails through the air, hits a carnival ride and falls to the ground, but is OK. An action figure rides a motorcycle four feet through the air and falls, but is unharmed; another doll on the cycle hits the door of a showcase and grabs the handle to open it (no damage is shown). Several toys let the air out of an RV tire and the driver grumbles as he changes the tire. Three toys vandalize the GPS in a moving RV and push on the accelerator and brake pedal, causing the vehicle to lurch and smoke until two patrol cars stop the vehicle, but release it and a toy jokes about the driver going to jail.
► A carny ties a doll to a shooting gallery’s prize wall, a plush toy kicks him in the head five times, then the doll slams his helmet over the plush toy’s foot, causing the doll and two plush toys to fall off the wall and run across tent tops and café umbrellas until they roll down a roof to a ledge, where the two plush toys pound the doll with fists (no one is damaged). A toy made of three sheep side-by-side bites a doll in the rear end, hanging there for several minutes through multiple scenes (there is no pain). A doll throws a shepherd’s hook like a lance at a gangster doll, knocking him down. Several toys slide down a line of pennants being pulled behind an action figure on a motorcycle to a room where they fight four dolls, knocking them down. A fork toy falls and a cat slaps it several times. A toy jumps out a window and saves a toy car from being washed down a street gutter in a storm. Three toys run head-long into an open drawer and fall down. We see half a plush toy lying on a floor and the other half sitting in a room hidden inside a slot machine with stuffing coming out of its waist (it feels no pain) and we hear that a cat tore it in half.
► An action figure rides a motorcycle 40 feet through the air and through a hole in a sign, but hits his head on a light bulb and falls to the ground (he is undamaged). An action figure rides a motorcycle and does balancing stunts, but has a sad flashback about his little boy, who kicked his cycle and gear across the room because it was not as good as a TV commercial advertised. A little girl throws away a doll that went through a long process to gain a new voice box and the doll cries. A doll demands that another doll give her his voice box.
► A man steps on a doll twice and we hear crunching each time, but the doll is OK

– his face is bent, but he sticks a thumb into his mouth and blows, popping out his face. A doll screams when another doll’s arm comes off in his hand and she screams more loudly, then laughs at him while re-taping the arm to her body. A cat becomes entangled in a cable and so do a large numbers of toys; the cat runs, dragging the toys behind it until it hits its head on a wall and the cable falls away. Two plush toys are entangled in the undercarriage of a carousel and shout for several seconds, but fall out and are covered in grass.
► A doll screams in fright at toys in a room and faints. A woman shrieks when she sees a strange doll in a suit lying in a baby buggy. Several characters scream at four dolls that all look alike with unusual facial expressions and pinstripe suits (looking like gangsters). A toy horse shivers in fright at a thunder and lightning storm. A toy’s little girl cries when she cannot find the toy. A young girl cries at home and at her Kindergarten orientation. A young girl cries when a rude boy takes her art supplies when she says, “Hi.” A group of toys panics when a toy goes missing and a T-Rex shouts, “The panic is attacking me!” A doll argues with a clock, and several other toys. A man shouts a few times and later he grumbles nonsense noises and his wife tells their young daughter that the man is saying bad words.
► Two dolls look sadly at each other when one is being given away. A spork fashioned into a toy with pipe cleaner arms becomes upset that he is not a real toy and keeps jumping into a trash can, but a doll in the can tosses him up onto a bed dozens of times. A doll walks away from another doll and they both look sad; the first doll decides to stay and his friends say goodbye with some tears. Several toy characters talk about belonging to children and missing them when the kids outgrew them.
► We hear the sound of flatulence and a toy accuses a toy pig of the flatulence and a child later calls him “Stinker.” A cat swallows a tiny toy, coughs it up after gagging, and it rolls on the floor covered in slime. A toy shakes a large dust ball off his hand. A man at a carnival has a large blob of what looks like mud and dried blood on his leg and his beard is scraggly and his clothes are dirty.

– Name-calling (crazy, idiot, weirdo, cheater, useless, spaceman, genius, pull-string, trash), exclamations (are you kidding me, you’ve got to be kidding me, shame on you, be quiet, shut that toy up, man, I swear, aww, shoot, aarghh, oh my goodness, what the …), and a man grumbles in a scene where he is described as using “bad words.” | profanity glossary |

– A doll wakes up woozy as if he had anesthetic when his voice box was removed. A glass of wine is seen on the edge of a bathtub. 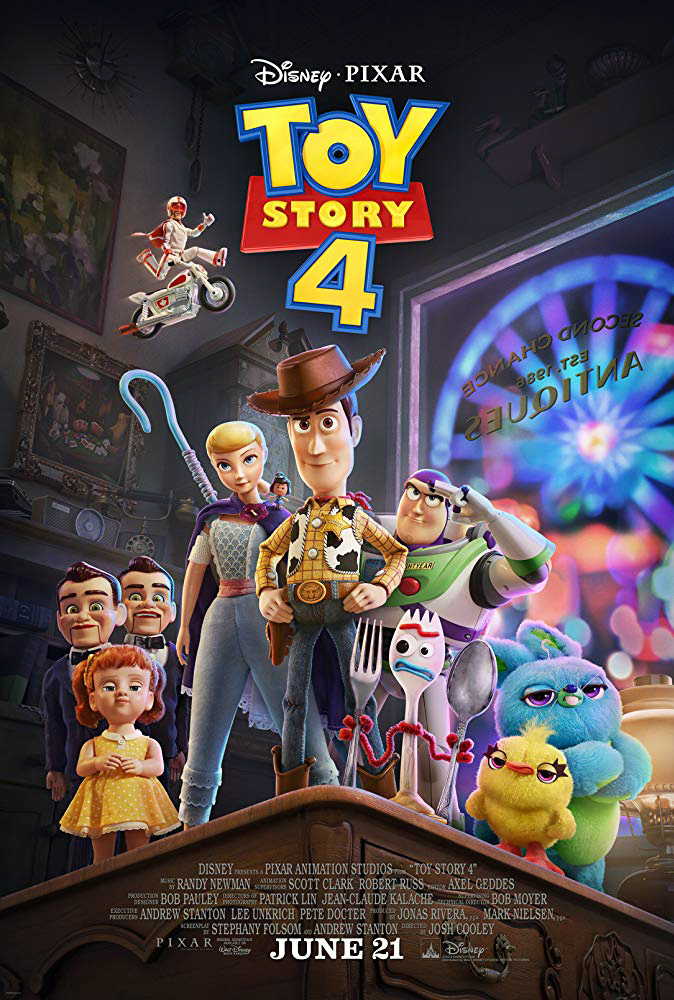