The third installment of the Toy Story toys finds Woody and Buzz being boxed up as Andy, their owner, goes off to college. With the voices of Tom Hanks, Tim Allen, Joan Cusack, Ned Beatty, Don Rickles and Michael Keaton. Directed by Lee Unkrich. [1:23]

VIOLENCE/GORE 3 - The majority of the sequences listed below can be tense and show the toys in peril, with the potential for real injury.
► In an extended sequence, several toys struggle to regain their footing after being dumped into a trash compactor at a garbage dump: they narrowly avoid being crushed by two large spinning shredders, only to be placed on the path to a giant incinerator, which is belching fireballs and black smoke and we see the dolls seeming to realize that there is no way out and fearing the worst (the toys are later seen unharmed).
► A TV is dumped into a garbage dump and lands on top of a toy that is pulled out and is shown to be unconscious (he is seen to be unharmed later).
► A doll is held down by several other dolls, it struggles to get free, and the other dolls unscrew a panel on the doll's back while it screams.
► During an imagination sequence, a toy rips through the roof of a train, is cornered by another toy that lassoes him with a whip and steps on his face, a third toy then pushes the toy with the whip off the train while laughing maniacally (he lands on the back of a horse running behind the train); the two toys on the train detonate a large explosion on the tracks and the train falls into a gully (we fear for the occupants, identified as orphans, but they are saved when the train is lifted to safety).
► A toy rips the removable mouth off a shouting toy. A pigeon pecks at a makeshift toy, causing it to crumble into three pieces; it is later seen restored.
► A toy attacks several toys, throws them into a pile and holds them there while yelling. A toy monkey screeches loudly and presses an alarm bell when it sees other toys moving. A toy monkey screeches and hisses at another toy. A dinosaur toy roars loudly at other toys.
► A large flying toy drops a "bomb" of toys -- a Barrel of Monkeys -- on top of other toys, and the monkeys swarm the other toys. Several toys are closed in baskets that look like cages and are watched over by another toy that yells at them and threatens them. Toys are seen being tossed, ripped apart, licked and destroyed by children. Toys shove, push, and karate chop other toys, including a toy kicking another toy and shoving a toy into a sand box, and a toy clamping its arms around another toy's head. Two toys wrap another toy in scotch tape and place it in a filing cabinet drawer. A toy tackles another toy, twisting its head around and later tying it to a paddle forcing him to watch as his clothing is torn to shreds. A toy is seen tied to a chair as if being interrogated by another toy, which is shouting.
► Toys are shown crying or shouting in panic when they realize they are being abandoned or discarded by their humans. A doll hyperventilates in a couple of scenes when she is afraid.
► A doll rides on the underside of a janitor's cart, drops off in a bathroom, climbs up a toilet, nearly falling in and then nearly dropping his hat in, then climbs out a window and onto a roof.
► A toy describes, and we see in a flashback, how he and two other toys were left behind by their human, and when they made their way back they are devastated to realize they have been replaced.
► A toy clown with a scary face and a deep voice is shown in a few scenes. A large baby doll is shown in a threatening manner in several scenes and in one particularly creepy scene, it is shown swinging on a swing at night staring at the moon until it hears a noise behind it and its head turns around to face backward. Toy trucks with spotlights on them patrol hallways.
► A toy yells at a baby doll, tells it that it was no longer wanted and rips a pendant from its hands; the doll whimpers, picks up the toy, throws it in a garbage dumpster and closes the lid. A doll slaps another doll in the face and rips a scarf off his neck.
► Several toys argue in a few scenes. We see a toy with smudges and scratches on its face (resembling bruising) after what is implied to be violent questioning.
► A toy falls from a kite, into a tree and hits multiple limbs before almost hitting the ground. A dog falls on top of a toy, which struggles to free himself.
► After having been played with violently, toys are shown putting themselves back together: A dinosaur is missing its tail (he finds it and re-attaches it), dolls have paint on their hair and faces, a toy has pasta and glitter glued to its back and a toy forces other toys out of a hole in its underside.
► A toy slips and falls in a bathroom and breaks to pieces as another toy jokes, "Watch out for puddles" (implying the toy slipped on urine). A toy jokes with another toy saying, "I don't think those were Lincoln Logs" (implying the other toy had been around feces). A toy jokes that the smells of trash could be his flatulence. A young child is seen shoving a toy into his mucus-covered nostril. A doll tells three smaller dolls to "stay out of my butt" and we see them open a hatch and jump out.

(Note: An extended short before the movie features two cartoons that wrestle one another, including one cartoon punching the other cartoon in the face until his eyes are blackened, as well as placing him in a chokehold and throwing him off a cliff. One of the cartoons is also implied to urinate while it stands in front of a waterfall and the two characters appear to gawk and make wolf calls at cartoon women in bikinis at a swimming pool and beach.) 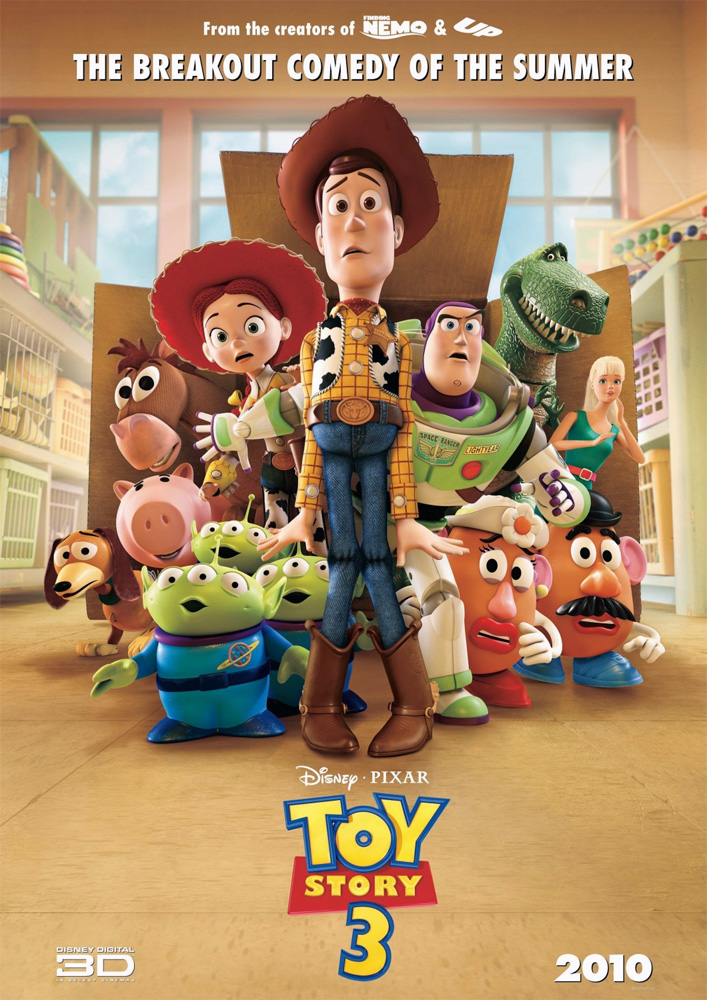