Taking liberties with H.G. Wells' classic sci-fi novel, this version was directed by the author's great grandson, Simon Wells: A 19th century inventor (Guy Pearce), desperate to change the past, invents a time machine that takes him to a far-flung future when humans have evolved into two distinct races. The gentle, naive Eloi who live on the surface, and the Morlocks, monstrous dwellers of underground cities. Also with Mark Addy, Samantha Mumba, Jeremy Irons and Philip Bosco. [1:36]

SEX/NUDITY 3 - A man kisses a woman passionately and the crowd of people around them react with alarm (it's the 1800s). A man and woman hug a couple of times. A woman wears a mesh halter-top that exposes cleavage, the outline of her breasts, and the slightest hint of her nipples. A woman wears a gauze dress that is slit up the side and we see her thigh as she climbs a ladder. We see a bare-chested man a few times and men in tribal attire are also bare-chested. A woman wears a skin-tight biking suit that accentuates her figure. There is a reference made about women being "used as breeding vessels."

VIOLENCE/GORE 6 - A man and woman are held up by a man with a gun; the mugger struggles with the woman and the gun discharges shooting her in the chest, and she falls to the ground -- we see a puddle of blood on the snow around her as she dies. A woman is struck by a horse-drawn carriage that drives onto the sidewalk where she stands; we see her lying dead on the ground. The Morlocks are large, super-strong, horrific looking creatures with yellow eyes, ashen skin, sharp fangs and spiky spines on their backs. A man and a Morlock fight while traveling in the time machine: they are both knocked around, one has a bloody mouth, one swings a knife at the other, and one is sprayed with steam and falls out of the time machine and dangles by holding onto the other's neck; the time machine speeds up and we see the one dangling outside begin to disintegrate except for the hands which remain around the neck of the one inside the time machine. A man discovers some blood-covered meat hooks and knives and when he panics he slips down a ramp and lands in a pool of water filled with skeletons. A man is grabbed by the neck by a Morlock and pulled up. We hear screaming and then see people running in panic when Morlocks literally come up through the ground, chase them, throw them through the air, tackle them, blow goo-covered darts at them and take them back underground. An explosion causes many Morlocks to disintegrate. A group of Morlocks with blood-covered mouths (they appear to have been feeding) chases a man and a woman; the woman hits one Morlock with a shovel. A Morlock holds out his hand and makes a man come to him (he seems to be levitating), holds the man by the throat and squeezes. A Morlock chases a boy, a man tackles the Morlock and hits it with a stick. A Morlock chases a man who climbs up a structure, the Morlock follows, is kicked off, lands hard on the ground and then climbs up again and both the man and the Morlock crash to the ground. A Morlock grabs a man around the neck and a boy waves a torch in the Morlock's face; frightened the Morlock runs away. A man and a boy walk through a dark jungle filled with mist and we hear creepy breathing. There is a discussion about the Eloi being food for the Morlocks. A man dreams of a creature with yellow eyes, and a sharp-toothed stone creature that becomes animated and chomps down threateningly. A man climbs down a dark, sheer wall, slips, and a huge cloud of bats fly up at him. We see an unconscious man with a slightly bloody and scabbed face. A man is tossed around in the time machine and is knocked unconscious. Two police officers try to take a man away in handcuffs as they are pummeled by debris falling from the sky (the moon is crumbling and we see a demolished city). We see Morlocks working in a dark cave; they seem to be shoveling something into a fire and one of them picks something off the back of another and eats it (they look like primates grooming each other). A boy wakes up screaming from a nightmare. We see a woman locked in a cage. A man describes when "the moon fell from the sky." A woman tells a man that a group of people is trying to decide whether to "throw him in the river." A man has a large bruise on his side.

SUBSTANCE USE - A man talks about the benefits of tobacco use.

MESSAGE - Love and companionship are the reasons for our existence, not technology. We all pay a price for our ambitions. 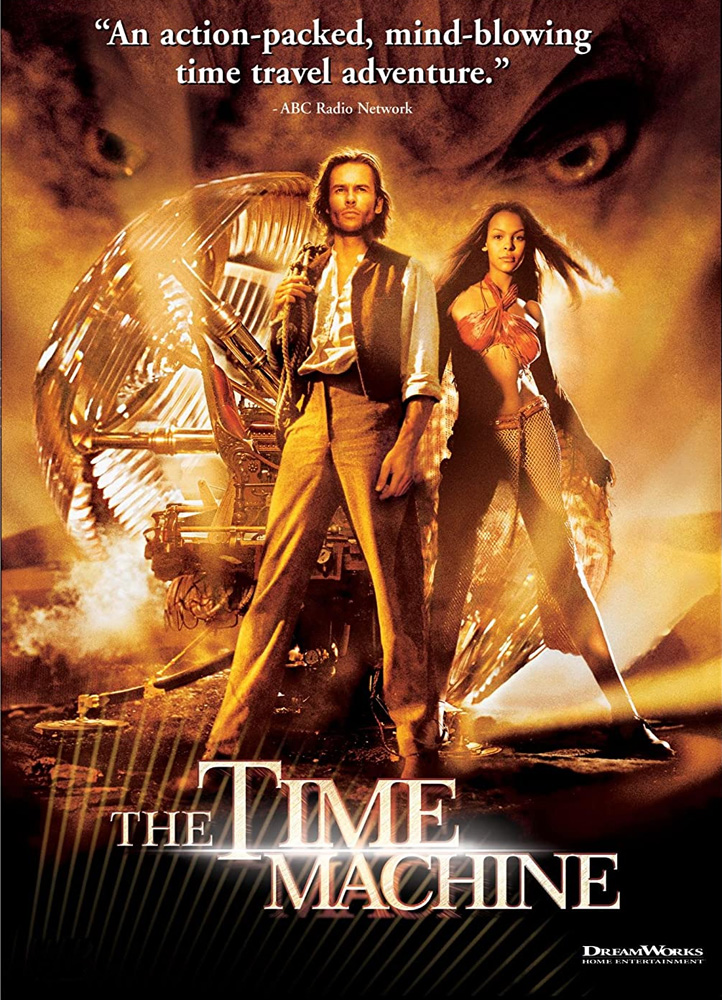