Why is “Thor: Love and Thunder” rated PG-13? The MPAA rating has been assigned for “intense sequences of sci-fi violence and action, language, some suggestive material and partial nudity.” The Kids-In-Mind.com evaluation includes several kissing scenes, talk of relationships ending, talk of two dads making a baby, partial nudity, many fight scenes between people and monsters with a lot of slashing and lopping off the heads and limbs of monsters with some blood shown, discussions of the death of loved ones, discussions of people feeling betrayed by their gods, and some strong language. Read our parents’ guide below for details on sexual content, violence & strong language. When alien gods are threatened, and some are dispatched by a villain (Christian Bale) with the power to destroy super-powered creatures, Thor (Chris Hemsworth) reunites with old friends to stop him. Also with Natalie Portman, Tessa Thompson, Russell Crowe, Jaimie Alexander, Chris Pratt, Dave Bautista, Karen Gillan, Pom Klementieff, Sean Gunn, and the voices of Taika Waititi, Vin Diesel and Bradley Cooper. Directed by Taika Waititi. [Running Time: 2:05]

– A man is held in glowing chains in front of a large crowd as another man magically rips his clothing off; the man is left fully nude and we see his bare chest, abdomen, back, buttocks and legs, as women in the audience faint and others look on with interest. A man is shown shirtless and we see his bare chest, abdomen and back. Several women wear revealing outfits as they sit around a man on a floating altar (we see cleavage, bare abdomens, and legs to the hips) and men are shown shirtless (we see bare chests and abdomens).
► Flashback sequences show a man and a woman falling in love, and include flirting, dancing and kissing. A man and a woman kiss tenderly in a few scenes. A man kisses three women and one woman slaps him in the face.
► A man and a woman flirt in a few scenes. A woman kisses another woman’s hand and gazes at her suggestively. A man and a woman move close to each other.
► A character sings a song with some suggestive lyrics and talks about his two dads making a baby by holding hands at a lava pool. A character asks if a man and a woman are going to make a baby. Many alien gods gathered in a golden temple chant for someone to appear and when he does, he asks, “Where we gonna hold this year’s orgy?” A man talks to a giant axe when it apparently is acting jealously of another weapon. A man talks awkwardly about his feelings for a woman. A character says, “Love is pain.”

Thor: Love and Thunder SUBSTANCE USE

– People drink wine in several scenes, and a man drinks a beer and pours some on an axe (introducing it to beer).

– Love is all we need. Keep your heart open. 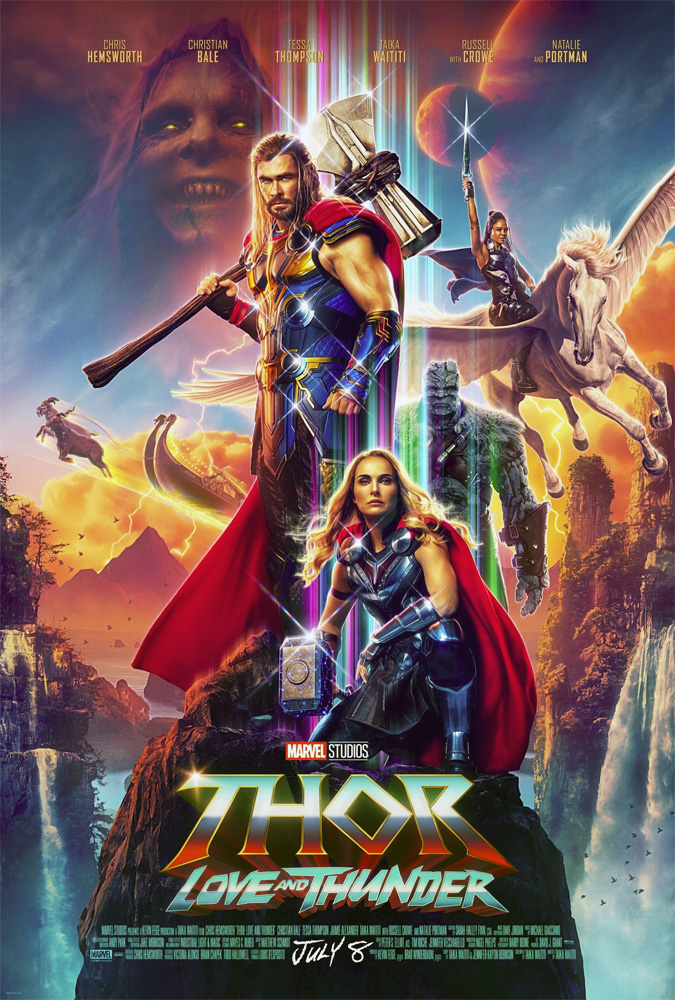