Political satire done with marionettes, from the creators of "South Park": A team of superhero terrorist fighters, with a secret base hidden in Mt. Rushmore, takes aim at terrorists who possess Weapons of Mass Destruction, as well as the Film Actors Guild. With the voices of Trey Parker, Matt Stone, Elle Russ, Stanley G. Sawicki and Dian Bachar. Directed by Trey Parker & Matt Stone. [1:45]

SEX/NUDITY 9 - Please note that all the characters are marionettes, thus some detail is limited with respect to body parts and sexual activity: A man and a woman kiss, we see them nude (we see her bare breasts and his bare buttocks, but they are not anatomically correct otherwise) lying in a bed and they kiss; in a series of encounters, the man lies on top of the woman and thrusts, then the woman is on her hands and knees and the man thrusts from behind, then the woman is on top of the man thrusting facing him and then away from him, then they perform oral sex on each other, and then she performs oral sex on him. A man asks another man to perform oral sex on him, we hear the man unzip his pants and then see the other man move downward and off screen. A man talks about another man having performed oral sex on him. A man asks a man if he is gay. A man talks to another man about fearing that he will force him to perform sexual favors. A woman says that she will have sex with a man if he makes her a promise. Women wearing traditional belly dancing outfits (revealing cleavage and bare abdomens) dance in a tavern. A woman wears low-cut tops that reveal cleavage. A man proposes marriage to a woman. A man and a woman kiss.

VIOLENCE/GORE 8 - Please note that all the characters are marionettes, but their wounds are portrayed realistically: A man is shot in the back three times (we see blood on his shirt and a pool of blood forms under him on the ground). Two men shoot a man repeatedly (he thrashes and we see blood on his shirt). A man shoots a man in the head (we see a bloody hole in his head). A woman shoots up a tavern (many, many people are hit and we see blood splatter and bodies fall). A man wearing a vest made of explosives blows himself up (we see flames and matter spray), a window is blown out, a mountain is damaged, another man is blown through the air and he may be dead. A man is dumped into a shark tank and we watch as the shark attacks him (the man's head falls off as the shark thrashes him back and forth). A man is pushed off a balcony and is impaled on a peg (we see blood on the peg). A man shoots three guards (one falls over a balcony onto the floor), people shoot back and forth, we see people hit with blood on their clothes, a grenade is thrown and it blows a man's head off (we see head in the air, and it bounces on the floor). A woman is hit in the head with a bullet (it blows the top of her head off and we see her head misshapen and bloody). Two women fight with swords, one is cut in half at the waist (we see the two parts separate and see blood and matter). Several men fight, one man's head is kicked off (we see blood and matter), one man is set on fire (we see him burning and hear him screaming). Two panthers (actually house cats) approach a man and a woman and act aggressively, then they jump through a window and attack two men, one pulls off a man's arm (we see blood and matter), one gnaws on a man's neck and throat (we see blood and gore and hear squishing and slurping noises) and the cat takes the man's head off. A woman is shot repeatedly, then falls off a balcony and splatters on the ground (we see a bloody pile of matter on the ground). A man is shot and his head blows off (we see a lot of blood). Several men carry briefcases with red lights that flash, a helicopter warns them to drop the cases, the men pull guns and begin firing, two men lower themselves from the helicopter while firing guns, one man is shot and falls into a fountain (he has bloody bullet holes on his chest), one man is shot and is propelled back through a plate glass window (we see blood on his shirt), two men fight with punches and kicks, and one is shoved to the ground. Scenes of torture involve a man attached to jumper cables and shocked, a woman strapped to a table with a faucet dripping on her forehead, and a man is chained upside down to a wall. Aircraft duel in the air, we see pilots being hit by gunfire (blood splatters on windshields) and planes in flames crash into water; a helicopter explodes and the pilot bails out. Two ships explode in the Panama Canal causing water to flood the surrounding ports and people are washed away (we see bodies, chickens and donkeys floating after the flood). A Jeep is chased through the Egyptian desert by a Hummer, the men in the Hummer shoot at the men in the Jeep, and one of the passengers falls out of the Jeep and crashes onto the windshield of the Hummer; the Jeep drives into and over a man who's walking, the driver of the Jeep is shot in the head (blood and matter splatter onto the windshield), and the Jeep crashes into the Sphinx and explodes. A man holds a gun on another man. Two men are jumped and knocked unconscious. A man imagines Weapons Of Mass Destruction being set off all around the world at the same time: we see blasts and people being thrown through the air. A man talks about witnessing his brother (when they were both boys) being attacked and killed by gorillas in a zoo. A man talks about having been raped by a group of actors. A man is strapped to a table and a woman performs what we think is surgery on his face (we see blood covered tools). Two men are doused with gasoline and another man threatens to burn them. We hear a voice screaming and the sound of what appears to be wild animals attacking several times (a character has repeated flashbacks). A skeleton floats in a shark tank. A man is shoved through a door and into a room. The Eiffel tower is hit by a rocket, it collapses and crushes the Arc D'Triomphe and a rocket is fired into the Louvre. A man takes target practice, and two men practice fighting (one is knocked down to the ground). People in a play sing a song about everyone having AIDS. A man asks another man, "Have you ever seen a man eat his head?" A man vomits (we see goo, he stumbles and falls to the ground where he continues to vomit repeatedly until he passes out in a huge pool of vomit). A large beetle crawls out of a dead man's mouth.

LANGUAGE 10 - 62 F-words and its derivatives, 12 sexual references, 9 scatological terms, 59 anatomical terms, 14 mild obscenities, 14 derogatory terms for homosexuals (some are in an ongoing play on words referring to the Film Actors Guild as F.A.G.), 1 derogatory term for African-Americans, 6 religious profanities, 15 religious exclamations (1 in French with no translation).

MESSAGE - Fighting terrorism without an intelligent plan can cause more destruction than the actual terrorist acts we are trying to prevent. 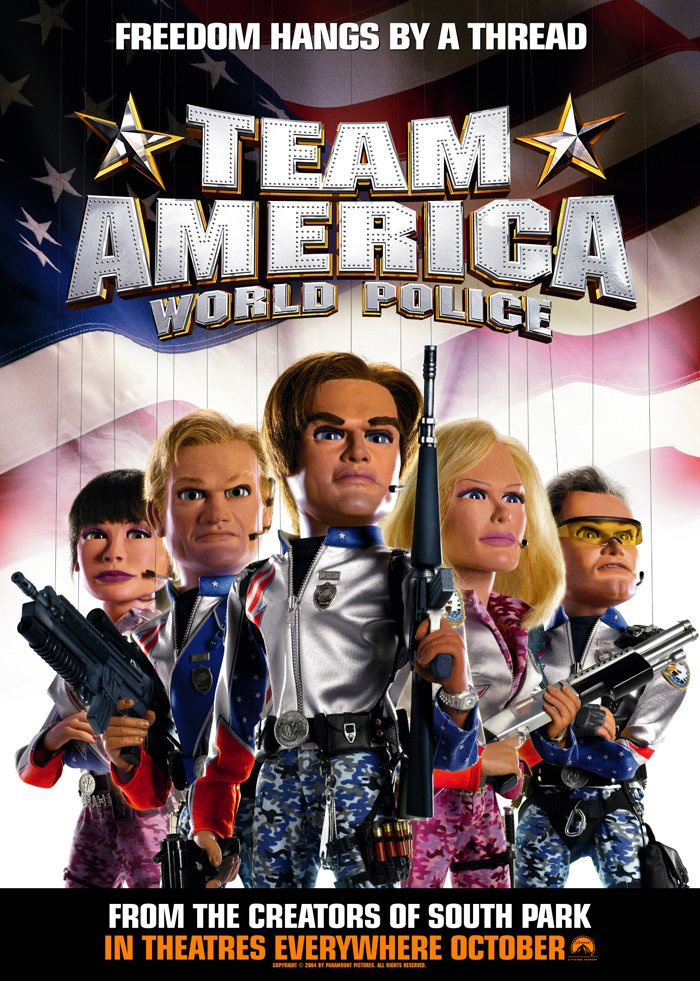