A team of MIT students attempts to win big stakes at the blackjack tables in Las Vegas with mental gymnastics and fake IDs, convincing themselves that they are operating a business, and they are not really gambling. With Jim Sturgess, Kevin Spacey, Kate Bosworth, Micky Rosa, Laurence Fishburne, Aaron Yoo, and Liza LaPira. Directed by Robert Luketic. [2:02]

SEX AND NUDITY 6 - Several scenes in an exotic dance club show scantily clad women dancing around poles and performing lap dances for men at tables: some men are shown putting casino chips into the dancers' cleavage (the dancers are wearing bra-like tops and short shorts and some are wearing only g-strings and bras; tattoos are visible on several bare buttocks and one dancer is topless and we clearly see her bare breasts as she dances).
► A young man removes a young woman's blouse, revealing a bra (we see her bare arms, back and side); the scene cuts to the couple in bed, and they kiss several times (it is implied that they have sex and are still together in the morning).
► Two young women in a bar dance together several times and then kiss each other and fall to the floor among laughing college age men and the scene cuts to a table across the room where three college men are watching.
► A young woman in a low-cut, tight dress runs across a casino floor and the top part of her breasts bounce up and down visibly (her nipples remain covered). A line of scantily clad women at a casino wear low-cut blouses that reveal either cleavage or cleavage and bare abdomens; others wear very short skirts revealing bare legs to the upper thigh. Two swimming pool scenes show many men and woman in bathing suits, including skimpy bikinis.
► A young man on a bus tries to kiss a young woman, she refuses, both become embarrassed and she tells him not to feel bad about it. A young woman sits in a young man's lap in a bar and asks him if he wants a private dance; he says, "It might be expensive" and the scene ends. Two male college students talk about whether one of them slept with his male boss to get a raise, and he says he did, in a joking manner, and the other says he would too for a price. A college student tells his professor, "I slept with Ida, a dancer." A college student says that he is dating someone and another student says, "…the right hand," implying masturbation. A male college student complains that he "gave up sex" (to do extra schoolwork). Three male college students watch girls in a bar and complain that they have no dates.
► Two male college students enter an airport men's restroom stall, one hands the other several large rolls of money and tells him to put it in his underwear to avoid detection by security, and he does so (he does not remove any clothing in the process). A brief scene in a women's lingerie store shows several college students taking bras from a display and playing "catch" with them.

VIOLENCE AND GORE 5 - A man sits in a chair, and another man punches him in the face and then in the stomach (substantial blood flows from the man's mouth).
► In a dark basement, two men threaten a college student: one of the men hits him in the face (we see a little blood from the corner of his mouth) and the stomach, and one man places heavy rings on his hand, makes a fist and hits the student in the face (we do not see this punch land); he then threatens to kill him (we see the student with a slightly swollen face and lip and later a black eye).
► Two men put a burlap bag over a young man's head and kidnap him while he screams (he ends up OK).
► There is a fistfight in a casino between two sets of men, one man pulls out a gun and fires it into the air, chairs are tipped over, beer bottles and glasses break and chips go flying, security men break up the fight and lead the shooter away while the other participants flee.
► A young man slams another young man into a dining room booth and yells at him.
► In a casino, four men in suits run toward a blackjack table and a young man yells, grabs his chips, and runs from the table. In a flashback scene, several men run from the shadows through a casino toward a blackjack table where a man looks up with a shocked expression and leaves the table quickly.
► In a college lecture hall, a professor throws a piece of chalk and hits a student's arm (the student yells, "Ouch").
► A college student in a casino hotel steals as much as he can fit into his luggage, including Bibles, ashtrays, many things from maids' carts, and similar items; his professor yells at him twice about stealing.
► A male and female college students tell each other that their fathers are gone, implying that they are dead. A professor yells at a college student loudly and the student yells back.
► A man hides behind a slot machine, watches four colleges students cheat at blackjack, calls security, one of the students is caught and the scene cuts to the student in a dark basement.
► A young man runs through a loading dock and kitchen with a young woman, chased by security, they run outside, and they are threatened by a security guard with a gun.
► In a dark basement, a man threatens a second man tied to a chair and says he will turn the second man over to the IRS.

SUBSTANCE USE - Several bar scenes show bottles and glasses of beer on dining tables and the bar, and a few people sip briefly from glasses of beer, several casino scenes show beer bottles, wine and highball glasses, and a few people drink, a man pours liquor from a bottle into a glass and drinks, and three college students pour whiskey into glasses and one drinks. Several scenes show one person smoking a cigarette, two scenes show a smoky underground gambling room with several people smoking cigarettes, and several scenes in an exotic dance club show a few people smoking briefly. A professor instructs college students in a casino to order non-alcoholic drinks, but to act a little drunk. Two male friends confront a third about the possibility of him taking recreational drugs (he denies the accusation). 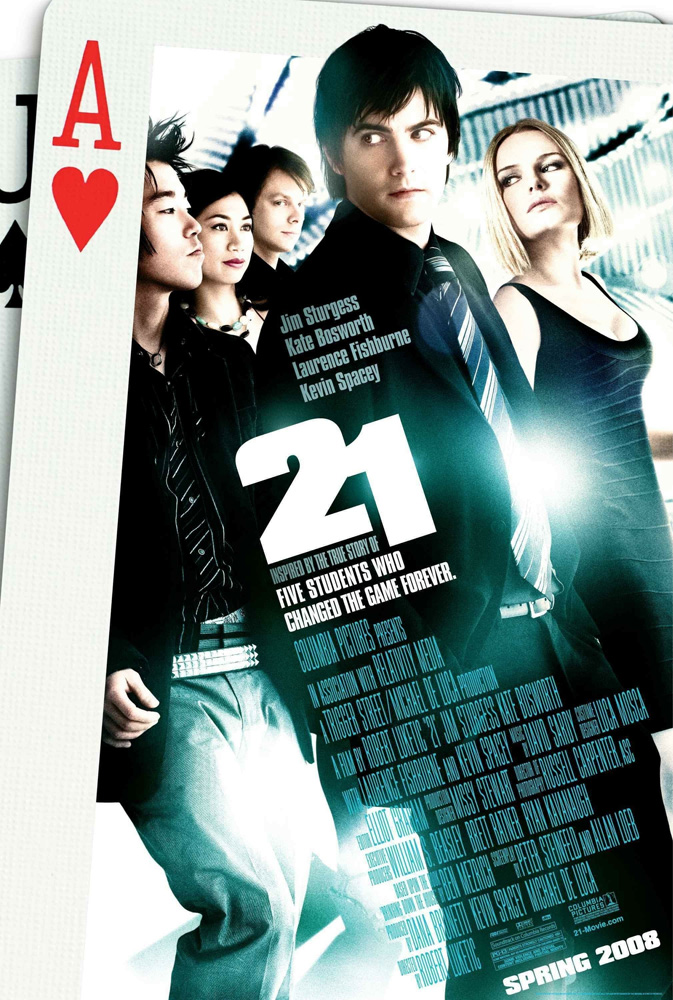