In this sequel a group of quirky former police officers face a dilemma when the mayor and residents of a French-Canadian town on the US border object to being annexed by the US. The reenlisted Vermont State Troopers (Jay Chandrasekhar, Kevin Heffernan, Steve Lemme, Paul Soter and Erik Stolhanske) are called in to set up a new Highway Patrol station in the disputed area. Also with Sean William Scott, Rob Lowe, Brian Cox, Will Sasso, Lynda Carter and Damon Kyle Wayans Jr. Directed by Jay Chandrasekhar. A few lines of dialogue are spoken in French with English subtitles and a few lines of French gibberish have no translation; a dream sequence includes dialogue in Japanese with English subtitles. [1:40]

SEX/NUDITY 8 - A sex bar is shown smoky and dark as a woman is nude (except for a narrow thong-bikini bottom) and a man wearing only a genital bag dance around poles on a long platform (the woman's bare breasts, abdomen, buttocks, back and thighs are seen and the man's bare chest, abdomen, back, buttocks and thighs are shown along with his genitals covered by and bouncing inside the bag). A woman in a sex bar is shown topless and wearing a narrow bikini bottom (we see bare breasts, abdomen, back and a small amount of apparent pubic hair or a shadow). A man at a sex bar wears tight fitting mid-thigh shorts (his penis openly dangles between his legs), with a T-shirt that is cut off above his nipples (revealing his partial bare chest and abdomen) and another man throws the penis several punches without a reaction from its owner. A nude man disrobes and does cartwheels outside in a long shot and we see full back nudity along with his genitals dangling several times.
► A man in an armchair in a sex bar cuddles with a male and a female prostitute in his lap and the man is wearing leather straps across his chest and leather shorts that reveal thighs and legs while the woman wears a skimpy bikini that reveals cleavage, bare abdomen and bare legs to the thighs. Two men in a background shot of a sex bar wear mid-thigh shorts that revealing thighs, and a couple of narrow leather straps across their chests. We see a close-up of a man's face surrounded by four pairs of nude female buttocks rubbing against his cheeks, chin, and top of the head as he shouts that he is trapped, and the scene ends. A man takes two other men down a dark red-lit hallway in a tour bus to meet a woman who may be a prostitute, named "Juicy Lucy," but pushes them out the back door instead.
► Three RCMP officers are stranded nude (we see them from the waist up and their bare backs, chests and shoulders are seen) on a road and painted red, white and blue (Please see the Violence/Gore category for more details); a paint outline of testicles and a penis ejaculating appears on one of the painted men and the three men are shown later wearing a long serape, shorts and a T-shirt, and long waders with suspenders. A few men wear knee-length boxer shorts and T-shirts in a locker room; they chain a shirtless rookie on his back to a bench and spray shaving cream over his lower abdomen and genitals, which we do not see, as they say they are going to shave his genitals, but they do not; we see a close-up of a cherry being placed on top of the shaving cream and the men leave the rookie on the bench as he shouts that it burns. Inside a band tour bus, two women wear tight-fitting T-shirts and short shorts that reveal cleavage and bare thighs/legs; a woman lies in a top bunk with one bare thigh and lower leg sticking out from under covers and two mean wear sleeveless leather vests that reveal hairy arms to the shoulders and bare chests. A few scenes show women wearing low-cut blouses that reveal cleavage. A man appears sweaty and shirtless and another man says he smells like Bombay. A man wears a T-shirt and large areas around his outlined nipples are wet; another man asks him if he is lactating and he says he is just doing what his body says to do (he has become addicted to female hormones).
► A man and a woman alone in an office hurriedly remove their outerwear with the woman practically ripping of the man's shirt; he is shown shirtless (his bare back, chest and abdomen are shown) and she wears a V-neck, sleeveless top that reveals cleavage as they push down their slacks (we glimpse their bare thighs) and they kiss until an RCMP officer clubs the man in the head (there's no blood) and he drops out of the frame. Two men almost kiss on a dare, but their wide-brimmed hats get in the way. A man and a woman kiss each other on both cheeks. A woman kisses a man goodbye and says she will date him when his groin heals from a sawmill accident (please see the Violence/Gore category for more details). A man and a woman at a mall sit in massage chairs that vibrate the woman's stomach and make her breasts stick out farther until RCMP officers approach and accuse the man of doing inappropriate things with a Canadian woman (the couple leaves). A man does "The Twist" dance and shakes his behind.
► A man holds up a large plastic pill bottle and says it is full of capsules of Tiger Penis for erections and other men laugh. A TV commercial advertises Flova Scotia as a female sex enhancement drug. A sex bar is called L'Explosion Brothel. Two Mountie impersonators stop a man and a woman in a car and tell them that the key to happiness is "A penis in your [anatomical term deleted]."

SUBSTANCE USE - Two young boys and a young girl whom we hear are intoxicated with speed (amphetamines) drive a car while unable to see over the steering wheel and swerve and drive into a ditch and we see an open baggie of green pills in the car when a trooper holds them up and says that they are "hopped up on goofballs" (the children are unharmed), we see a shack that is filled with cases of large baggies of drugs and boxes of cigars, five state troopers swallow some of five different drugs (depressants, LSD, female hormone, amphetamines and steroids) (please see the Violence/Gore category for more details), a smoky band tour bus emits a cloud of smoke from a side door and inside has a corner shelf filled with cans of beer and unknown bottles of liquor, we hear that band members smoke marijuana, as a tour bus careens along a road pills and a drugged cigarettes float in slow motion into the frame, and a man steals a large baggie of female hormone pills from a crate. Men and women at a town meeting hold glasses of beer and throw them at people (some glasses are plastic and splash beer, while others are glass and shatter on floors), a man impersonating a Mountie lies on the hood of a car with his trousers off (we see his thighs and lower legs) and holds a half-bottle of bourbon when the car owner approaches and the impersonator startles and spills the alcohol on the car as he runs away, and a few men and a few women drink beer in a club and in a home. Three men smoke cigars, and later four men smoke cigars in another scene.

MESSAGE - Working for the state highway patrol can be dangerous but exciting. 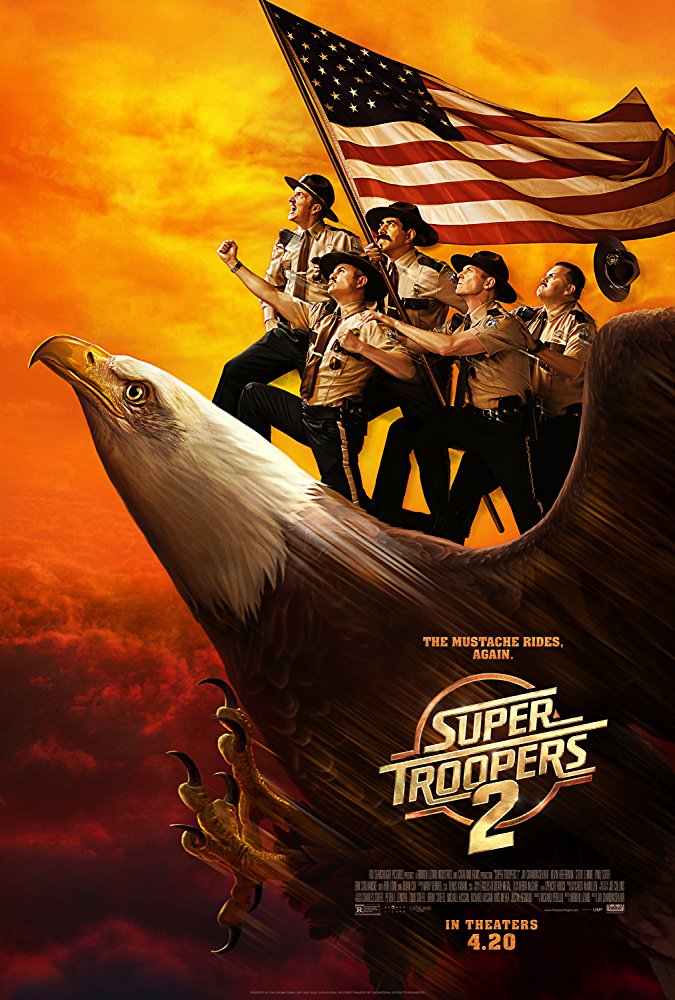