Sci-fi film taking place around 2057: Life on earth may be coming to an end when it becomes evident that the sun is dying. There seems to be no solution, until a group of scientists creates a bomb that can be used to re-ignite the sun. A spaceship with a crew of eight men and women is launched, after the first attempt, 7 years earlier, ended in disaster. But the new mission is threatened by accidents and paranoia. With Michelle Yeoh, Cillian Murphy, Chris Evans, Troy Garity and Rose Byrne. Directed by Danny Boyle. [1:48]

SEX/NUDITY 0 - A man lies bare-chested in his bed and a woman sits on the end of the bed to wake him (nothing sexual is implied).

VIOLENCE/GORE 7 - Three men in space are blown out of the hatch of a vessel and thrust toward another vessel, one man catches the outside of the hatch, pulls another inside and the third man floats away unable to catch on; we see the man as his face freezes, his eyes freeze, his skin turns purple and we hear crackling; he opens his mouth and frozen blood particles spray out, he crashes into a communication tower and his arm is breaks off, with frozen blood particles spraying, and then he floats into sunlight and bursts into flames.
► A man outside a space vessel is exposed to full sunlight, he appears to be consumed by a wave of fire (we hear a loud rumble, he screams and is out of sight) and another man is thrown over the edge of the vessel (he holds on and is OK).
► A man stands on a walkway as a wall of flames approaches him, he screams and reaches to touch (the scene ends).
► A man dips into frigid water to repair equipment, he is more frozen each time he comes out and he becomes stuck under the equipment the third time in (we see blood in the water, he quakes and shivers and he freezes to death).
► A man sits in a room in a pool of blood after having slashed his wrists (we see the open, bloody wounds). A woman is stabbed in the back (she gasps, moans and collapses). A man is stabbed in the arm (we hear a crunch), he screams and then thrashes.
► A man is slashed across the chest by a scalpel (we see blood and the open wound), and the wounded man runs away and leaves smeared blood in several places.
► A man is held in the air by someone holding him around the throat, he struggles and a woman grabs the assailant's arm -- the skin on his arm begins to pull away, we hear it tearing, and we see blood underneath.
► An airlock is opened, a large gust blows out of the opening, a man is thrown against the wall, and large and small items are sucked out of the opening, including a dead body.
► A man jumps from one part of a vessel to another from the outside; the part he abandoned slips into the path of the sun and explodes.
► A man plunges his hand into frigid water and moans from the pain (we see ice on his skin when he pulls it out). A man exposed to below freezing temperatures has a badly frostbitten hand (we see burned flesh and blackened finger tips).
► A man exposes himself to increased levels of sunlight and we see increased damage to his skin and face (blistering, peeling, scabbing). We see the form of what appears to be a badly burned man in several scenes (we get glimpses of burned and scarred flesh and we hear crunching and tearing when he moves).
► Two men fight in a couple of scenes: they shove and strike each other and yell accusations at each other.
► Several men walk through an abandoned vessel, it is covered in thick dust, and they find several dead bodies (they appear to have been scorched by the sun and we see skeletal remains). Three men prepare to blow a hatch and be thrown from one vessel to another through 253 degrees below zero environment; two men wrap themselves in flimsy insulation and the third wears an environmental suit. Two men prepare to leave the ship (they suit up in heavy protective gear) and walk outside to perform a repair.
► A man smears blood on another man's hand, accusing him of being responsible for another man's death.
► A warning signal blares, crew members dash to their posts and we hear that panels have been damaged from sun exposure.
► Several men vote to kill another person, one man volunteers to do it and leaves with a scalpel. Two men argue about who is going to wear the one environmental suit they have. A man in a mentally unstable state begins ranting about not being "our place to question God," regarding our life and death. People debate whether or not to try to rescue the crew of another vessel.
► A fire starts and burns rapidly and wildly, oxygen tanks are opened, the flames expand, there's an explosion, and the fire burns itself out. A large cloud of smoke approaches a woman, she locks a hatch door and is separated from it.
► A man has repeated nightmares about falling into the sun (we see him falling and screaming). People begin to have labored breathing as the oxygen in a vessel begins to diminish.
► People talk about the sun dying, and that the Earth is in a solar winter and human beings are facing extinction. We hear that a man is being heavily medicated because he is on suicide watch (we see him with an I.V.).

SUBSTANCE USE - A man is given an I.V. sedative.

MESSAGE - Long periods of time in space can make you crazy. 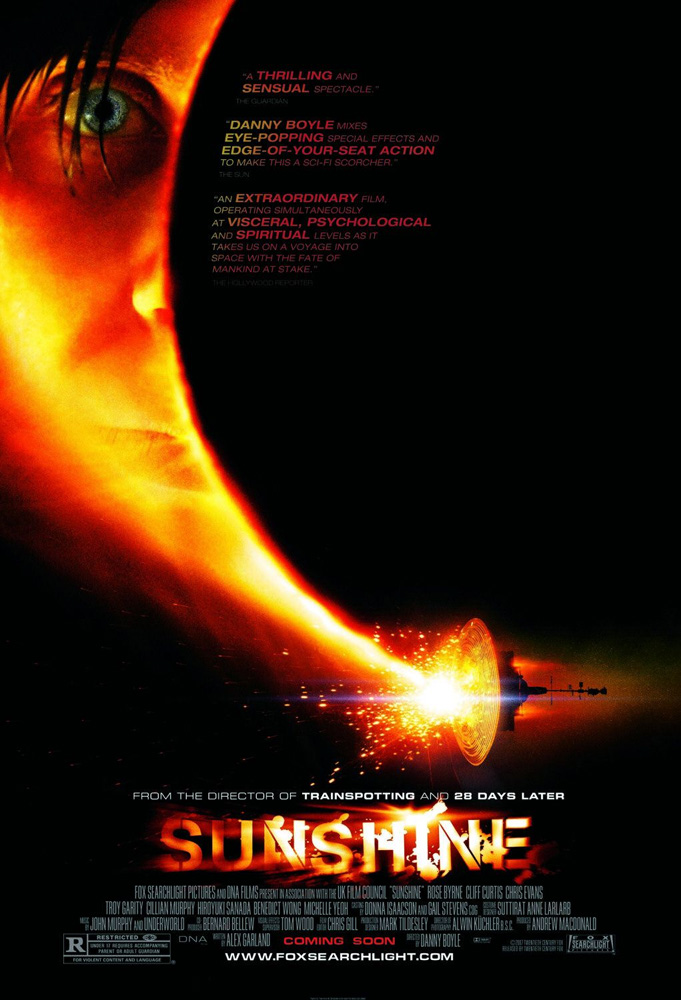