Why is “Storm Boy” rated PG? The MPAA rating has been assigned for “some thematic elements, mild peril and brief language.” The Kids-In-Mind.com evaluation includes a couple of scenes of a man and a boy wearing long johns, and a bare chested man, several scenes of men hunting birds and killing many leaving bloody wounds exposed and a nest with three hatchlings left unattended after the mother bird is killed, a few arguments, mentions of a woman and child dying in a car accident, and a man’s regret over not re-connecting with his father, and some mild language. Read our parents’ guide below for details on sexual content, violence & strong language.” A man (Geoffrey Rush) remembers his youth living with his father in an isolated shack where, as a boy (Finn Little), he saved and befriended a pelican after hunters killed the hatchling’s mother. Also with Jai Courtney, Erik Thomson, Trevor Jamieson and Morgan Davies. Directed by Shawn Seet. A few lines of dialogue are spoken in an Aboriginal language with English translation and a few lines are spoken without translation. [Running Time: 1:39]

– A man talks about leaving his family after a woman he loved was promised to someone else.
► A shirtless man paints on his face and body before performing a ritual dance, as a boy and three pelicans watch him (we see his bare chest, abdomen and back).

– A boy hears gunshots in several scenes and a few of those scenes show hunters picking up dead ducks that they have shot and leaving behind many dead pelicans with bloody wounds on their feathers; a boy discovers a nest with three hatchlings in it in one such scene. Two men hunt for ducks and shoot several pelicans out of the sky (we see bloody wounds); one pelican charges the hunter and they try to shoot it until a boy stands between them and tells them to stop. A pelican flies toward a man with a gun and it is shot out of the air; we see it flop onto the ground with a bloody wound and a boy picks it up and takes care of it.
► A storm rages at sea and a man in a boat is caught in rough water; the boat overturns and the man is thrown in the water where he flounders until a pelican carries him a line and he is pulled to shore by a man and a boy (there are no injuries). A storm rages outside an office building and a glass pane in a boardroom breaks throwing glass into the room and the people gathered inside run out; one man moves closer to the open hole and another man pulls him away. A man threatens a boy as the man’s dog barks at the boy’s pelican; the man says, “Bad things can happen.”
► A man talks about the death of his wife and young daughter in a car accident. A man has a few flashbacks to his youth when his mother and sister left in a car and we understand that they were involved in an accident that killed them both. We see a couple of flashbacks to a graveside funeral. Two men and a boy stand around a burial site seem sad. A boy grieves over three pelican when they fly off to join a flock. A boy yells at his father in a couple of scenes.
► A man talks about having problems with his father and that he was angry as a boy. A man says, “Who cares about a bunch of birds.” A boy caring for three orphaned pelican hatchlings tells them, “Please don’t die.” A teen girl says, “I hate him,” about her father. A man says, “I don’t trust people to be smart.” A man says that parents, “Have to do what they think is right even if their children will hate them for it.” A man talks about regretting never having made peace with his father. A man yells and slams an outhouse door when pelicans try to open the door and he is inside. A teen girl is reprimanded by a teacher who takes her phone away and three other teen girls laugh at her. A man calls out that he and his son will never again be able to sleep with three young pelicans living in their shack with them. A man complains that three pelicans are eating 10 pounds of fish a day and that he can’t afford to keep feeding them. A man tells his young son that wild things need to be free and that he must teach his three young pelicans how to find food and how to fly so they can survive on their own. Townspeople raise money to send a boy to a private school but he complains about leaving his father; they argue. Protestors wave placards and yell about mining and corporate greed in a few scenes.
► A man and a boy use an outboard motor blade to grind up fish to feed hatchlings (we see goo splatter on a window and later see goo on the boy’s face and the man’s clothing). A man erects a tall platform and calls out that it will help his young son to never get lost.
► A man describes how birds are fed when they are young saying that they “upchuck into them,” and a boy pantomimes gagging. A boy is shown cutting up and grinding fish for young birds to eat (we see muck in a few scenes). A young boy teaches three pelicans how to fish by catching fish in his own mouth; we see one fish impaled underwater on a stick for a bird to grab.

– A man drinks a glass of whisky, a man drinks beer with a meal, a teen girl puts a splash of what could be brandy into a man’s coffee in the morning, and empty beer cans are seen in water where two men have been hunting for birds.

– Disagreements can happen but we should never take our families for granted. 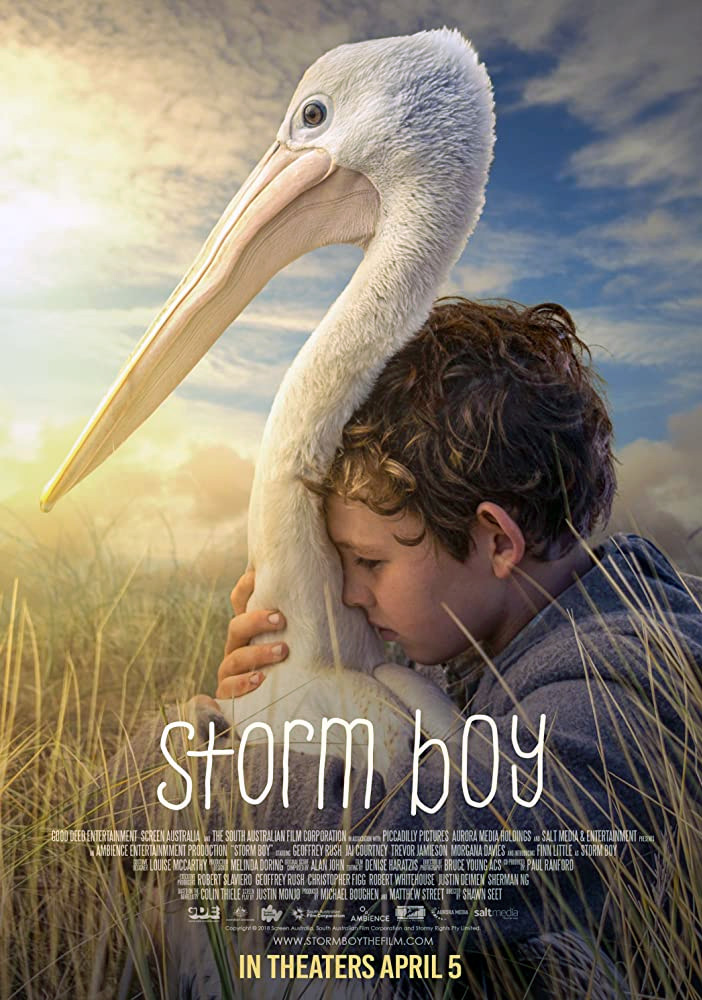