Why is “The Starling” rated PG-13? The MPAA rating has been assigned for “thematic material, some strong language, and suggestive material.” The Kids-In-Mind.com evaluation includes a couple of kisses, a sexually suggestive light-switch cover, a child dying from SIDS, an attempted suicide, many arguments and angry outbursts including a punch, many scenes of a bird dive-bombing a woman and causing bloody injuries, the poisoning of a bird, a near car accident, and at least 2 F-words and other strong language. Read our parents’ guide below for details on sexual content, violence & strong language. A woman (Melissa McCarthy) who lost her child struggles with her job, anger, sadness and an aggressive bird in her garden, as she also obsesses over her husband (Chris O’Dowd) who is confined to a psychiatric clinic. With unexpected help from a psychiatrist-turned-veterinarian (Kevin Kline) and the persistent bird, she searches for answers. Also with Timothy Olyphant, Rosalind Chao, Kimberly Quinn, Daveed Diggs and Loretta Devine. Directed by Theodore Melfi. [Running Time: 1:42]

– A man and a woman hug and another man and a woman embrace briefly. A man kisses the forehead of a woman and later the couple embrace and kiss for several seconds. In a flashback, a man lays his hand on a woman’s pregnant belly.
► A woman embroiders a light-switch cover with the outline of a nude man, where the light switch fills an opening in the abdomen and groin. A dog thrusts against the leg of a woman, startling her.

– A small bird dive-bombs a woman in several scenes, knocking her down and wounding her over the eye in one scene (we see blood flow), and over the other eye in another scene (we see some more blood) and a doctor says that she needs stitches in one scene (we see only the bandage being applied over the wound). A woman wears a football helmet in several scenes and is repeatedly knocked down by a bird. A woman climbs a ladder while wearing a helmet and a bird knocks her several feet to the ground, and she lands face up; she briefly hallucinates that her husband is standing over her and the scene cuts to the woman in a recliner with large bags of frozen food on both sides of her neck, thighs, and knees. A woman and her husband wear helmets as they run into a garden and a bird and its mate dive-bomb them both, without injury. A large crow chases a small bird in the sky for several seconds and does not catch it.
► A woman buys bird poison and puts it into a bird feeder; she comes home to find a large dead crow lying in the yard, she cries, bundles the bird in a towel and buries it. A woman and a man sit in lawn chairs near a garden and a small bird dive bombs them both, knocking them out of the chairs; the woman hits the bird with a thrown rock and the bird drops to the ground, unmoving and the woman shouts and sobs, and takes the bird to a veterinarian who does surgery off -screen and the bird recovers and is released. We hear that a woman’s baby died of SIDS and she walks into the nursery looking sad, moves all the furniture and baby clothing out to the side of the road, returns to the nursery and frantically rubs out the marks on the carpet where the crib had been. A woman has a flashback when her husband had insomnia and when she went to find him, he was in the garage with the car running; we hear that the man tried to commit suicide.
► A woman loses control of her car in the rain, skidding and spinning 360 degrees to stop in a lane, stalled; two other drivers honk at her and drive on.
► A man persuades other male patients to portray animals with him on family day, and frightens a little girl who runs away; a woman asks him to return inside the clinic and he yells, he punches a staff member, and two orderlies grab him, ending the scene. A woman in a group therapy discussion begins yelling loudly, stands up and is subdued by orderlies. A woman cries loudly in a psychiatric hospital. A woman in a pottery session smashes her clay pot on the pottery wheel and another woman makes a pile of feces like an emoji on her wheel. A woman argues loudly with a man in his office, curses at him, breaks a figurine, belittles him and leaves. A woman and her husband in a clinic argue and he stalks away. A woman is told that her husband has requested no visitors indefinitely and becomes angry, shouting at a staff member; she leaves for the parking lot, entering and exiting her car several times while yelling loudly at the building; her husband watches from a window and he looks sad. A man is very sarcastic and rude to a psychiatrist. A store manager argues with his assistant in a few scenes, belittling her and telling her to “get with it.” A woman working in a store absentmindedly marks two aisles of products at 5-cents each, causing men and women to shout and grab many items as the manager calls out that the pricing is an error; the manager suspends the woman for the rest of the day. A man calls his wife and says nothing, and his wife talks about daily life until he hangs up. A man calls his wife and says nothing, and she raises her voice and sobs as she berates him and hangs up, after which he laughs and sobs. A man says that he has been depressed for many years since his 20s, gave up on therapy and medication, and feeling guilty for the death of his baby, he is punishing himself. A man says that he both hates and loves his wife because she will not give up.
► A woman working in a store pulls chewing gum out of her mouth into a very long string and a man berates her. A man on a TV show says his wife died and religion helped him overcome sadness. A man says that Mozart had a funeral for his pet starling, but had refused to attend his own father’s funeral the week before. A man says that a woman has a glass eye because of a bird attack. A man in a vet clinic cries loudly over his sick cat that has indigestion. A young boy comes into a vet clinic with his small dog, and the vet says it may have to be euthanized; the boy says his mom cannot handle the event and he can be there as he kisses the animal goodbye, but we later see him and his mom smiling because the dog is fine. An angry woman chops up her dying garden, but stops and later replants it. A brief rainstorm includes thunder and lightning. A woman buys a large owl figurine to use as a scarecrow for her yard, but a small bird sits on it and defecates.

The Starling SUBSTANCE USE

– A man sucks on a vaping device without making smoke and a woman sarcastically asks if he will also use meth next week, a man pretends to swallow pills but hides them in his mouth and places them in a tissue later in several scenes, a woman receives medication for an injured bird and gives it a few drops frequently and tastes the medication herself and grimaces, and a man has two large tissues full of capsules and tablets hidden in two shoes. A man asks for vodka and gin from his assistant before doing surgery on a bird (we do not see the alcohol).

– Grief and anger can take the form of acting out against other people and animals, but help can be found. 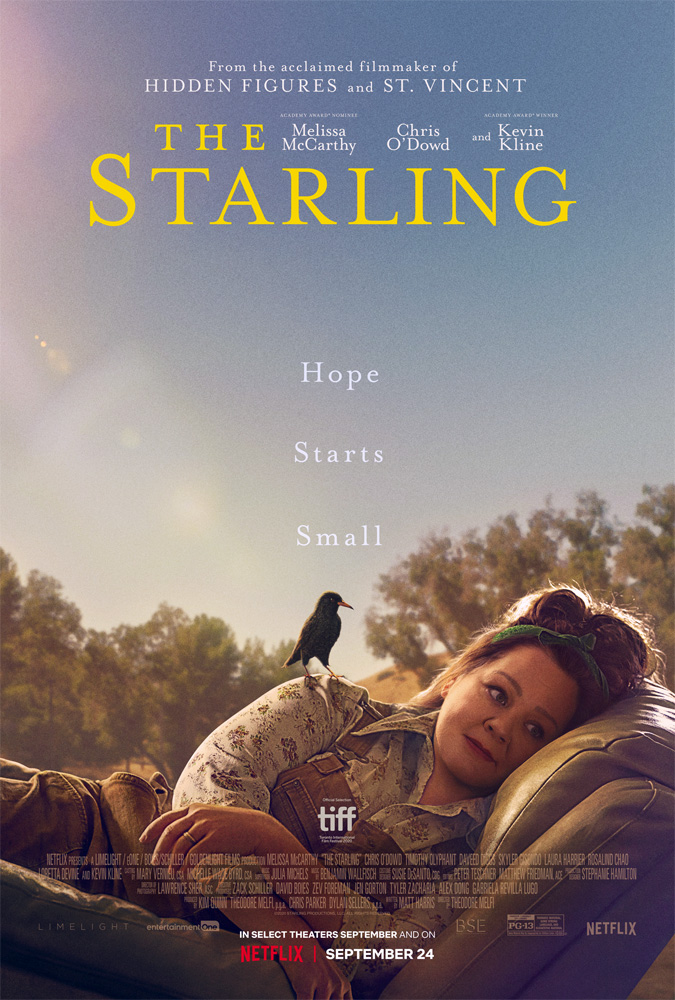