Four young women do whatever it takes to get to Florida for Spring break, including robbing a diner. When they get to Florida and the partying begins, they are arrested for tearing up a hotel, but they are bailed out by a local hustler and drug dealer (James Franco) who convinces them to help him with some of his schemes. Also with Selena Gomez, Ashley Benson, Vanessa Hudgens and Rachel Korine. Directed by Harmony Korine. [1:34]

SEX/NUDITY 8 - A man and two young women have sex in a swimming pool: we see all of them kissing, the man thrusts toward one of the young women as she holds and kisses the other young woman and we see them all nude under water (bare buttocks, chest and breasts are visible). A woman is shown thrusting on top of a man who tells her that he likes it (we see her bare breasts, buttocks and abdomen and his bare chest) while another woman licks his toes (we see her bare breasts, buttocks and abdomen and back).
► Two women shower and wash each other while a man watches them (we see their bare breasts, abdomens, buttocks and legs). A young man snorts a drug off a young woman's very low abdomen (near her genital area). Two young women kiss a man's nipples (we see part of the bare buttocks of one of the young women).
► A young woman, fully nude, takes a shower and we see her bare back, buttocks, legs, abdomen and breasts. We see many scenes of young men and young women in various stages of undress dancing on the beach and drinking heavily: bare breasts are shown repeatedly (one woman's bare breasts are shown in extreme close-up while others pour beer over them) along with partially bare buttocks covered by skimpy bikinis and men's bare chest and abdomen. A young man snorts a drug off a young woman very low abdomen (near her clothed genitals) and then licks her bare breasts (we see the breasts and nipple piercings).
► A young man makes a remark about wanting to have sex with a young woman (she is intoxicated and lying on the floor wearing a bikini); the young woman pulls up her bikini top to reveal her bare breasts and teases the young man saying they will not have sex. Two young women kiss while lying on the floor (we see the bare back of one of the young women as the other wraps her leg around her hip). Young men and young women at a party are shown kissing passionately. A young man and a young woman kiss. Several young women smoke something and blow the smoke in each other's mouth and they get close enough that they almost kiss. Young women kiss in several scenes. A man and a young woman kiss tenderly while another young woman watches and then kisses the man also.
► Young men are shown wearing jockstraps during a couple of parties (we see bare legs, abdomen and the outline of their genitals). Young women are shown wearing short-shorts, skirts and tank tops that reveal cleavage, bare legs and abdomens in several scenes; in one scene, two young women remove their shorts and we see them wearing panties while singing a song about taking their clothes off. A young woman's low-slung pants reveal her bare buttock cleavage and the top of her buttocks. A young woman wears shorts that reveal her bare legs. A young woman is shown asleep while wearing lace panties. Several women wear G-strings and their bare buttocks are visible when they are dancing in a club and as young women stuff the straps with money. A woman uses a narrow ribbon to try to cover her genital area and pubic hair (we are still able to see). Young women wear low-cut dresses and tops that reveal cleavage in many scenes throughout the move. Young women wear bikinis for an extended scene when they are arrested and held in jail and then appear before a judge.
► Young men hold open beer bottles and cans at their clothed crotches and pour beer into the mouths of young women lying on the ground. Several young women wearing bikinis sit on sand with their legs spread apart and eat Popsicles suggestively. Young men and young women drink and dance suggestively while on a bus. Many young men and young women drink and dance while standing around a swimming pool, with some people lined up on balconies overlooking the pool. Several young women hug and kiss and play with each other's hair in several scenes throughout the movie.
► A man caresses the faces of three young women and remarks about their beauty and how lucky he is; he then kisses the forehead of one young woman. A man caresses a young woman's face and lips while telling her that he really likes her (she storms away).
► A young woman draws a heart with the words, "I want penis" in it and then kisses it; another girl draws a line drawing of a penis and pantomimes performing oral sex on it. A man asks four young women about performing sex acts on each other and if they are "experimenting." A man talks about twin men that "share their women" and like "double penetration." A license plate reads BALLR.

VIOLENCE/GORE 7 - A man is shot in the head and falls dead to the ground; two young women shoot the man that shot him and then many other gunmen approach and open fire, the young women shoot down many of the men and we later see them lying in pools of blood with bloody bullet wounds. A man is shot in the head and his head falls backward (We see the bloody bullet wound later).
► A man shoots at a car as it pulls away and a young woman inside is struck in the arm (we see blood); later a man removes the bullet and we see the bullet, blood and the bullet hole. Three young women put on ski masks and they drive to a diner where one remains in the car while we see from the outside the other two inside threatening the patrons and staff and stealing money (one wields a sledge hammer and breaks furniture while the other carries a toy gun); we later see the robbery scene again from inside the restaurant.
► A man is shown with blood stained hands and he holds guns. Two young women point guns at a man's face; he tries to talk his way out of it, they put the guns in his mouth, one young woman asks the other, "Should we kill him?" and the man begins forcing the gun in and out of his mouth. A man holds guns in pose. A man shows off all of the guns, weapons and money he has. Three young women dance while holding their gun of choice.
► Three men are attacked in their hotel room, one man is struck in the face with a gun grip (blood splatters and drips onto the ground) and we then see the three men hogtied and lying on the bed. Three young women re-enact a robbery and yell at one of the young women telling her to get on her knees; she lies on the ground while the other two hold their hands in the shape of guns to her head and yell obscenities at her. A young woman makes a gun shape with her hand and points it at her head in a few scenes, pretending to shoot herself. Four young women are arrested and appear in front of a judge after spending a night in jail.
► Many young men and young women drink and smoke and dance in a hotel room and they tear up the furniture and the room until we see the police arrive and arrest several of them. Three young women stand near a car engulfed in flames.
► A man sings a song about killing his best friend. A man talks about wanting to be bad when he was a young boy and that he "likes doing the wrong thing." People make fun of a young woman in terms of faith and praying. A man talks about sharks "lurking" in the water. A man says, "All of his brothers and sisters are dead." A professor talks about the Civil War.
► Four young women urinate while wearing bikinis and squatting on a sidewalk (we see the urine).

MESSAGE - Giving in to temptation can lead to disaster. 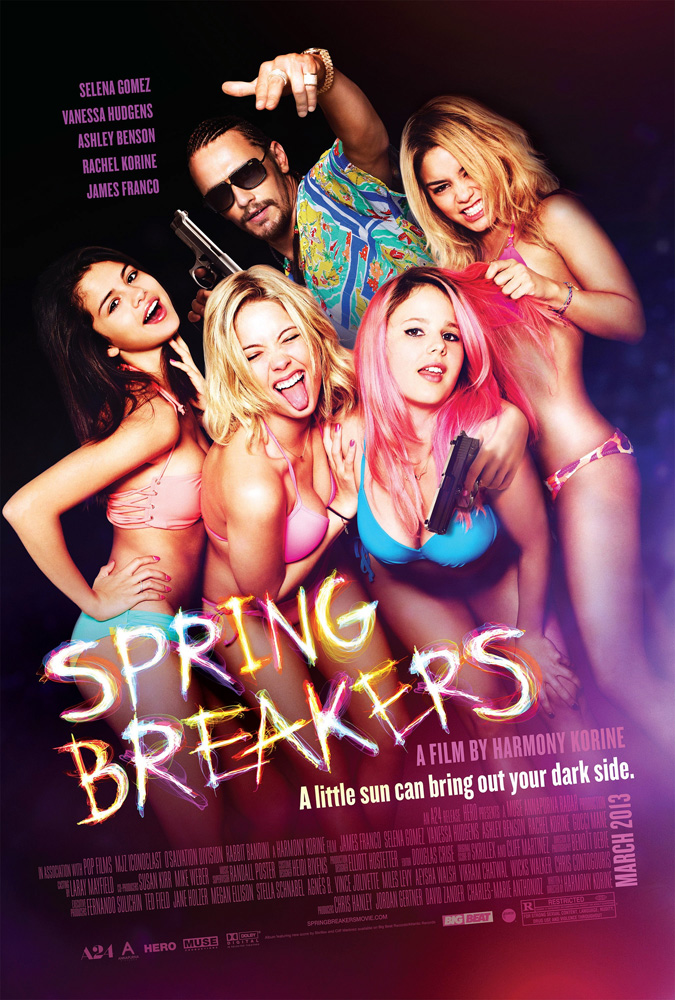