Making his big screen animated debut, Nickelodeon's SpongeBob SquarePants and Patrick Star, his starfish companion, undertake a daring, perilous mission across the ocean floor toward Shell City in order to retrieve the crown of King Neptune. They have six days to succeed, otherwise SpongeBob's crustacean employer, Mr. Krabs, will be fried by the king's fiery trident. David Hasselhoff shows up and assists. With the voices of Tom Kenny, Rodger Bumpass, Alec Baldwin, Bill Fagerbakke and Carolyn Lawrence. Directed by Stephen Hillenburg and Sherm Cohen. [1:30]

SEX/NUDITY 3 - A starfish has a crush on a mermaid and tells her that she's "hot." A starfish wears fishnet thigh-high stockings and black boots and a sponge stands beneath his legs singing. A starfish asks a mermaid if she wants to see his underwear. A paper file opens like a centerfold and is accompanied by striptease music. A sponge brushes a squid's back in a shower. A starfish puts something in his pants that causes a large protrusion in the back. A sponge pulls a starfish's pants down (we see bare buttocks). A starfish with no pants carries a flag with the stick between his bare buttocks. We see a starfish with no pants (bare buttocks are exposed). The back of a sponge's pants falls open revealing his bare buttocks. We see a bare-chested, non-animated man wearing swim trunks -- at one point he "flexes" his pectorals, they became unnaturally enlarged, mechanical-looking and they look square. Female fish wear bikini tops (they have bare abdomens), and a mermaid wears a shell (she has a bare abdomen). We see a sponge in his underpants.

VIOLENCE/GORE 4 - A sponge and a starfish are placed on a table under a hot lamp, and the sponge's arm breaks off as they shrivel and dry up -- they are revived by a spray of water. Flames shoot to the ocean's surface where a non-animated man is blackened (we see him smoldering and covered in black soot, but he seems fine). Animated fish surround and attack a diver with glue, doll eyes and punches. A starfish and a sponge ride on the back of a non-animated man who swims across the ocean, a tough-guy henchman fish attacks them, hitting the starfish, and stabbing the man in the buttock; the sponge and the starfish hang on to the man's legs, while the henchman fish threatens to rip the guts out of the sponge. However, the henchman fish gets soap bubbles in his eyes and falls off the man's legs and into the ocean. A henchman fish threatens to "exterminate" a sponge and a starfish. A henchman fish pulls the lips off two fish. A thug fish threatens to beat fish senseless. A henchman fish lifts his boot, which has long spikes on the sole, up and over a sponge and a starfish, and prepares to step on them, when he is stepped on by a larger boot. A group of hoodlum fish attacks two other fish and beat them up. Fish fight with punches in a bar. A sponge and a starfish are taken away by a diver and when they wake up they are in a fish bowl and they see mounted fish in the room around them. A sponge gets stuck to a fish's tongue; the fish opens its large mouth (we see many pointed teeth) and tries to eat the sponge, and chases it. A large fish is snapped out of the water by a larger aquatic serpent. A crab is frozen in a block of ice. A sponge and a starfish fall a great distance, hit a branch and are lowered to the ground gently; they walk through a lava pit while lava shoots up around them, and many fish and other sea creatures snap at them. A crab and a starfish wrestle. A sponge and a starfish are shot underwater by a man's very strong pectorals (please see Sex/Nudity for more). A starfish begins to melt. A starfish and a sponge stand at the edge of a cliff and see scary fog and movement below. A crab is zapped with a flame (we see him in flames and hear him screaming). A fish is thrown out of a bar, lands on the ground, and seems to have twisted limbs. We hear a discussion of a merman ordering executions. A merman threatens a crab with a large trident, and he yells and threatens him again with a flaming trident. A merman threatens three sea creatures with a flaming trident. A fish is hit with a large trident, twice. Several sea creatures step on a tiny plankton character and we see it flattened and with footprints in it. A sponge also steps on the tiny plankton character and we hear it yell with every step; we then see it squished on the bottom of the sponge's shoe. When a tiny plankton character is angry and yells its eyes bulge and become bloodshot. A mob of fish surrounds a squid that cowers in a corner and yells. A sponge slaps a crab. We see many large piles of bones and skulls along a road. A restaurant is surrounded by police and press when there is an incident inside. We see non-animated pirates with scarred and battered faces, eye patches, and missing and darkened teeth. A sponge drives a car through the side of a restaurant and along a road recklessly. A sponge takes a shower, eats a bar of soap, sticks a hose in his mouth, he fills with bubbles and then he brushes his eyes. We hear a starfish urinating. A merman has canned hair sprayed on his eyes accidentally. A sponge blows a long raspberry. A non-animated pirate dangles over the side of a moving ship, tied by the ankles, in order to catch a fish. A starfish and a sponge eat a lot of ice cream rapidly, we hear them burping, they make a mess splattering ice cream all around and on a nearby sea creature and behave as if they are drunk. Eventually they pass out from the ice cream eating binge and wake up with badly bloodshot eyes and five o'clock shadows (they look like they are suffering from a hangover).

SUBSTANCE USE - Fish are shown drinking in a bar.

MESSAGE - Even without possessing any hint of intelligence or any talent, you can still succeed if you try. Help can come unexpectedly. 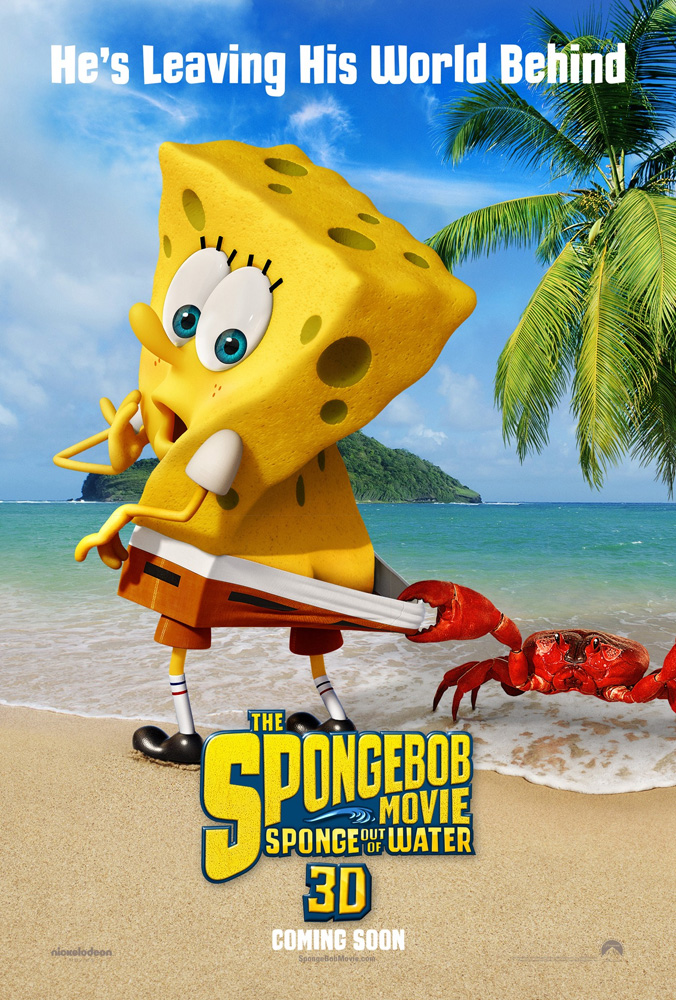