An animated tale of the old and very wild west, when stallions ran free. We follow Spirit, a mustang stallion, from birth to adulthood, watching his first encounter with humans, his developing friendship with Native Americans, and how he fell in love with a paint mare named Rain. We also see how progress encroached on the lives of the stallions. Narrated by Matt Damon, it also features the voices of James Cromwell and Daniel Studi. [1:22]

SEX/NUDITY 1 - A stallion and a mare flirt and nuzzle in several scenes. A mare delivers a colt: we see her swollen belly, hear her whinnying in pain and then see the baby. A newborn colt nurses from his mother and we see his mouth covered with milk. A man kisses a horse thinking he's a woman (the man is asleep at the time).

VIOLENCE/GORE 3 - A horse is shot during a battle scene where troops invade a Native American camp, pulling down tee-pees and firing guns. A train slides down a mountain while a stallion runs away from it: the train crashes through a shack, there's a large explosion and a fire spreads through the surrounding forest following a stallion as he gallops away. A stallion jumps a very wide divide between two cliffs. A stallion is tied to a post and left without food or water for three days, and a man is tied to a post. A mare falls into rapids and a stallion jumps in to try to rescue her; they flow through the rapids and over a waterfall and the mare lies wounded on the shore. A stallion and a Native American jump off a cliff into water below. A man dangles from a stallion's mane as they run along a narrow path along a sheer cliff. A man pulls a gun on a horse, and another man knocks the gun out of his hand. Horses are whipped to drive them to pull a train over a mountain. A mountain lion chases two colts and a stallion fights it off: the stallion rears up and waves his hooves at the mountain lion, the mountain lion jumps on the stallion's back but is tossed off and the stallion comes down hard on the ground next to the mountain lion that's now lying on the ground. There are several scenes where a stallion is chased by men on horseback: the stallion manages to knock several men off their horses, and the stallion is caught by ropes around his neck and/or legs a couple of times. There is a painful scene when a stallion is dragged away from a mare and she cries for him. A stallion falls to the ground (pretending to be unconscious), chains are wrapped around his legs and he is dragged away. A gun is fired to stop a horse from struggling. There are several scenes of men trying to break a stallion: six or seven men try to ride a stallion and they are head-butted and tossed off his back, one manages to stay on for some time even though the horse rams him into fence posts and bucks wildly, but the man is eventually thrown and lands hard on the ground. A stallion runs through a fort with a man dangling from his back, breaking down gates, the horse head-butts a man, and he tosses another man into a dung pile. A stallion is tied to poles for grooming: the stallion kicks the groomer in the backside, headbutts him in the head and kicks him in the eye (we see the man's black eye). The animals do not communicate with words, but by whinnying and body language: there are scenes when it is obvious that the horses are angry with each other or with humans. A man is conked on the head with a boot that was tossed off a horse's snout. A stallion is knocked down when another horse wraps a rope around his legs. A colt's tongue sticks to an icicle. A baby grabs a stallion's nostrils and pulls, causing him some pain. A colt hears a rumbling and when he turns around, he sees a huge herd of bison standing right behind him. There are some explosions when men are trying to lay railroad tracks through a mountain.

MESSAGE - Remember who you are. 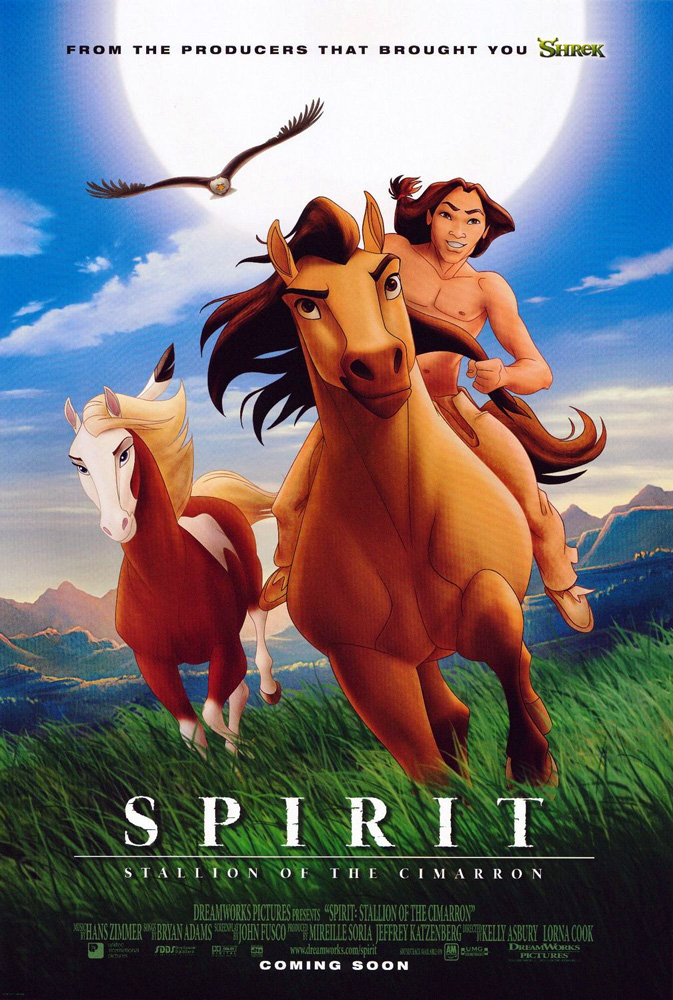