Why is “Spirit Untamed” rated PG? The MPAA rating has been assigned for “some adventure action.” The Kids-In-Mind.com evaluation includes a woman dying from an accidental fall while riding a horse, several scenes of treacherous undertakings by young girls on horseback, a few arguments and some name-calling. Read our parents’ guide below for details on sexual content, violence & strong language. Animated feature about a young girl (voiced by Isabela Merced) and the untimely death of her mother; she and her father (voiced by Jake Gyllenhaal) have to deal with their loss in very different ways, and when they move to a small town and away from the city, she meets a wild horse that helps her find true friendship. Also with the voices of Marsai Martin, Mckenna Grace, Julianne Moore, Walton Goggins, Eiza González and Andre Braugher. Directed by Elaine Bogan & Ennio Torresan. Several lines of dialogue are spoken in Spanish without translation. [Running Time: 1:27]

– A man opens a bathroom door and we hear a woman scream; he seems desperate to use the bathroom and disappears behind a building. Men and women dance together at a festival.

– A woman rides on a horse and performs tricks and jumps; during one trick it is implied that the woman falls and dies (we do not see the fall but we see the reaction of the woman’s husband and child watching in the stands). A horse takes an apple from a young girl’s hand and she tries to climb on its back, it rears and kicks and runs around the coral before breaking out and charging through town, bucking with the girl on its back; the horse jumps across a rock bridge and it collapses after they pass, and then walks along a steep ledge and the girl jumps toward two other girls on horses as the horse runs away along a dangerous path. A horse rears and bucks when a man tries to lasso it, other horses rear and kick and several men are kicked and thrown into a metal pole knocking them out; one man is dragged by a rope and slammed into the pole, another man jumps overboard, and a horse butts another man off the boat.
► A horse approaches a young girl and other horses surround her; she feeds them all apples until several men charge toward them yelling and they lasso several horses including a female and her young foal and take them away in a train car. When a young girl tries to rescue horses being taken on a train by several men, one man kicks her in the face and she falls to the ground (we do not see injuries). A horse kicks a man in the face and he falls to the ground (we see a large bruise on his face later).
► A man tries to ride a horse, it rears and the man kicks it hard in the sides with his spurs. Men try to work with a wild horse in a barn where we hear pounding and whinnying as a man yells, “We’ve got a biter,” and another man yells, “Bite it back.” Two men lasso a horse and tie it to a fence post. A girl climbs down a tree to sneaks out of the house and falls to the ground (she’s OK); she walks along railroad tracks and across a bridge at night and she hears sounds in the distance. Three girls on horses jump over a rock wall called the “Ridge of Regret” and one falls between rocks and must climb back out between rocks (the girl and the horse are OK). A girl kicks a man in the face after jumping off a horse and onto a train. A girl runs down a hill to get to a train as men lasso a horse and drag it onto the train. Girls on horses charge a train as it pulls away with several horses on board. Horses are led out of a train car and put on a boat. Two girls push two men into water and another girl ties two men to a barrel. A girl on horseback jumps off a walkway onto a boat and lands uninjured. Several horses jump overboard and swim to shore; a girl struggles to stay afloat until a horse and a man help her. A woman hits three men in the heads a few times with an oar and a horse drags a man away; we see the man tied by the hands and laid across a horse’s saddle later as they ride into town.
► A man yells at his young daughter, “No horses.” A man says, “She’ll have my hide.”
► Wild horses run alongside a train and a young girl watches with glee; she runs through the train cars bumping into people and nearly falls off the back of the train when she tries to touch a horse. A squirrel runs through a house and a young girl chases it, the girl swings from a rope and then dangles upside down with the rope tied around her ankle. A girl lassos a young boy and hog-ties him after he tries to swindle a woman and a girl out of money; she leaves him on a dirt road struggling to get free. A dog barks and snarls at a woman and young girl on a train. A dog chases a woman in a train and bites her skirt. A woman walks through cattle in a pen and she falls a few times (we hear squishing sounds but do not see any waste or muck) and remarks about the smell. Three young girls plan to rescue horses from a train and they discuss how dangerous the plan is; they discuss the dangers of a specific trail and traversing a mountain. A man’s house is a mess and we see unprotected explosives in several places.
► A woman spits a bite of cake onto another woman’s nose. A llama spits on the ground and we see goo. A man spits on the ground and we see goo. A young girl accidentally flips a spoonful of mashed potatoes into a woman’s face.

– Determination can save the day. 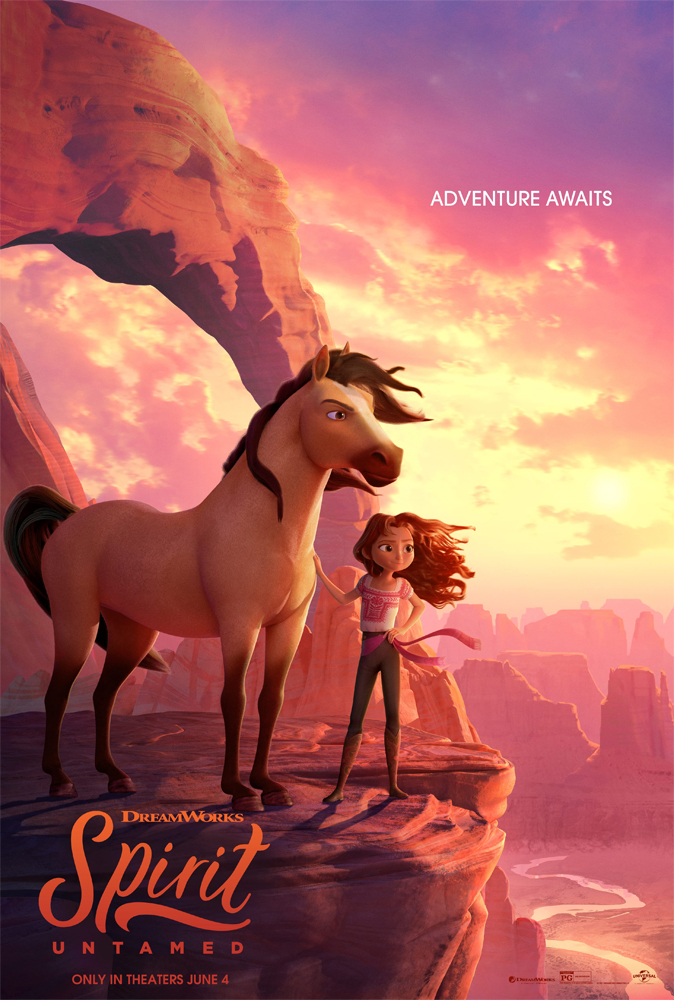