Why is “Sound of Metal” rated R? The MPAA rating has been assigned for “language throughout and brief nude images.” Kids-In-Mind.com evaluation includes a drawing and tattoo of a fully nude woman, a couple of kissing scenes, a bloody surgical procedure, a man destroying electronic equipment in frustration, several arguments about dealing with hearing loss, several scenes with distorted sounds representing what a man is experiencing while losing his hearing and after a surgical procedure, references to heroin addiction and alcoholism, and nearly 50 F-words and other strong language. Read our parents’ guide below for details on sexual content, violence & strong language. A drummer (Riz Ahmed) touring with his bandmate and girlfriend (Olivia Cooke) undergoes a dramatic loss of hearing and must figure out a way to learn to live with his condition. Also with Paul Raci, Mathieu Amalric, Lauren Ridloff, Chris Perfetti, William Xifaras and Hillary Baack. Directed by Darius Marder. A few lines of dialogue are spoken in French with English subtitles and a song is sung in French without translation. [Running Time: 2:10]

– A man undergoes cochlear implant surgery and we see blood, tissue, and bone, as we hear saws whirring in the operating room; after the procedure, we see the man with bandages on his head and scars with surgical staples.
► A man yells and stomps on electronic equipment breaking it to pieces; a woman yells for him to stop, but he cannot hear her. A man charges off-stage after a performance and hyperventilates outside; he tells his bandmate that he can’t hear. A man is told to sit in a room every day and write; the first day, the man pounds on a donut crushing it to crumbs and spilling his coffee, and then punches a wall as he screams in frustration. A man sneaks into a man’s office and uses his computer in several scenes. Children chase and tackle a man while playing a game (there are no injuries).
► Several scenes depict a man losing his hearing and we hear what it is implied he is hearing and feeling: one scene has a high-pitched whistle and muffled sounds, another scene has fully muffled sounds, and a hearing test has words coming through headphones that are barely discernible. After surgery, devices are attached to a man’s head and are activated and we hear a woman’s voice sounding tinny, accompanied by high-pitched whistles as she adjusts the sound; the man seems uncomfortable and she explains it will take getting used to. Distorted guitar riffs play while a singer screams lyrics and yells and colorful strobe lights flash in a few small venue concert scenes.
► A man yells at a woman and tells her, “I need a gun in my mouth.” A man and a woman argue and yell at each other about getting help for the man after he has lost his hearing. A man says that he lost his hearing when a bomb exploded near him while he was serving in the military in Vietnam. A man tells another man that he can’t stay in his program anymore and that he has to leave. A woman has cutting scars on her arm and a reference is made to her “hurting herself.” A man has a tattoo on his chest that reads, “Please Kill Me,” and another on his abdomen that reads, “Scumbag.” A woman says, “I used to imagine my funeral when I was a kid.” A woman talks about wanting to be cremated and that ashes are being put into tattoo ink, so that her lover could have her face tattooed on his back (it is said jokingly). A road sign reads “Deaf Child Area.” A doctor tells a man that the hearing that he has lost will not come back and that he must preserve whatever hearing he has left; the doctor talks about cochlear implants as an expensive but possible remedy. A woman calls a man’s sponsor and he refers them to a community where he can get help. A man talks about his heroin addiction and another man asks if he has thought about using since he started having hearing loss. Several people in a group meeting talk about being addicts. A man says that he is an alcoholic. A man talks about his wife leaving him and taking their daughter with her; he says the woman then committed suicide.
► A musician spits on her band T-shirt that’s for sale, and says that it is more expensive now.

Sound of Metal SUBSTANCE USE

– Dealing with life-changing events can be difficult but it is easier if you accept help. 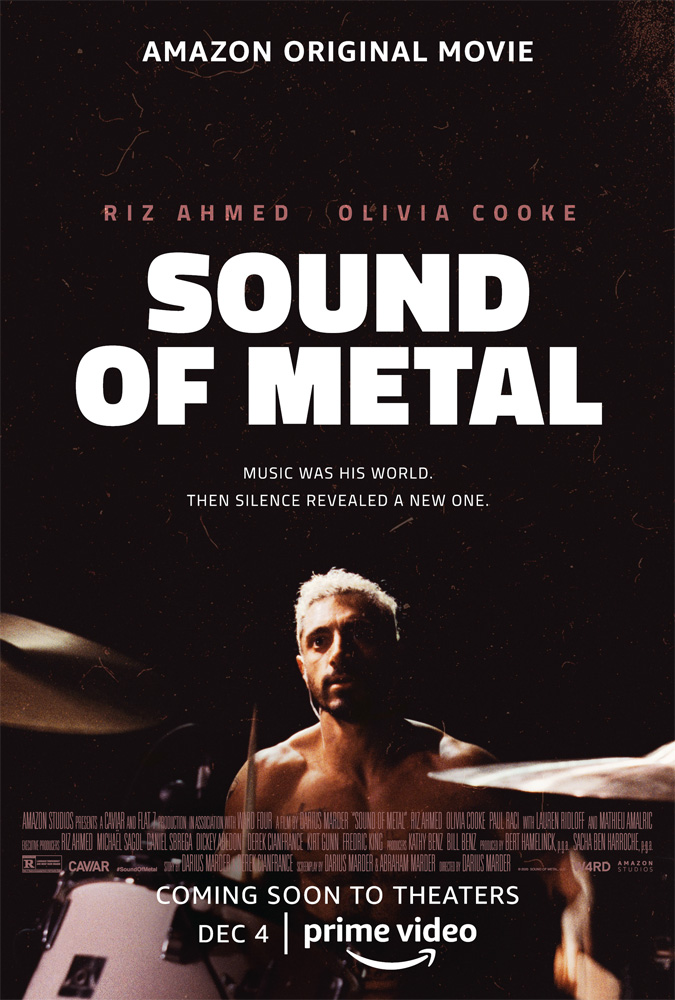