SEX/NUDITY 7 - A half dozen human-horse hybrids walk upright and display penises that are nearly two feet long. A claymation cavewoman has hairy breasts and nipples that bounce in the wind and we also briefly see her bare buttocks. A woman wears earrings that are sequined penises and testicles.
► A man and a woman have sex on a couch: the man is thrusting on top of the woman, whose underwear is pulled down (the man' bare back buttocks and legs are shown and one of the woman's thighs and a shoulder); we hear grunts, moans and a smacking of genital friction. Three couples in a darkened room are having sex in chairs and we see the bare backs and buttocks of two women thrusting over their obscured male partners; then we see the back of a man (his bare back and buttocks are evident) thrusting on a woman who is obscured except for a partial thigh and partial shoulder.
► A man and a woman rush into an apartment as they kiss, begin to take each other's tops off and the scene ends (sex is implied). A man is shirtless in 3 scenes, and a woman wears a T-shirt and skimpy underwear as they lie in bed and kiss, suggesting sex as the scenes end. A close-up of a woman from the back shows her adjust her bra straps and stand up off the man who is sitting on the floor (sex is implied); when they stand up we see his shorts and her underwear (we see the man's partial buttocks as he pulls the back of his shorts up). A man kisses a woman for several seconds in an art studio and the scene ends (sex is implied). Two clothed men pretend to have face-to-face sex, standing up. A huge, colorful cartoon-like statue depicts a clothed man having sex with a horse.
► A man sitting on a toilet exposes one bare partial buttock, thigh, and lower leg in profile. Five women at a party wear very short skirts or short-shorts. A few dresses reveal a little cleavage. A woman wears tight-fitting leggings in several scenes that accentuate her buttocks and thighs. In an apartment, a woman stands in the background wearing a bra (a little cleavage and bare abdomen are seen).
► A man kisses a woman briefly. A woman kisses a man for several seconds.
► A man tells a group that they may have contracted Chlamydia or Gonorrhea (no explanation is given).

VIOLENCE/GORE 6 - Union protesters on a picket line shout as armored police attack them with clubs, bloodying a few women's faces and beating men on the chest and back; the picketers part and the police run headlong into stone statues and fall unconscious (we see several protesters lying on the ground, unmoving and this scene is shown in TV footage three times). Police attack and beat men and women unconscious, drawing blood. A police van chases people off-screen, screeches, and slides back into the frame, pushed by a large horse-human hybrid; several more hybrids run on screen and beat police unconscious and then free a man that was beaten in the face and tossed into the back of a police van (the man's eyes are red and his face is scraped).
► A horse-human hybrid talks into the video box at the gate of a residence and the camera cuts to the living room, where the hybrid breaks in and roars, ending the scene. A man walks into a washroom and a horse-human hybrid falls out of a toilet stall, shuddering and screaming in pain on the floor; several other hybrids appear and the man darts into the hall, his trousers wet from what he later explains is urine and another man points a gun at him and says hybrids are the new American slave labor, stronger and more productive. A man rudely points a riding crop at other people at a party, and he points a handgun at an employee and tells him that he must become a hybrid horse-human to manage a new race of future slaves; the employee becomes angry and curses for several seconds.
► Several scenes of a popular TV game show are violent: In a close-up of the back of a man's head, something unclear repeatedly strikes him in the face and his head jerks and the man groans; another scene shows a woman's crying face as a man repeatedly punches her (blood covers her face and streams down her neck to her chest), someone hits a man in the face with a large fish several times, a man is held by two other men as another man punches the captive in the stomach over a dozen times and we hear groans (the camera cuts to the victim and he is standing, covered in feces head-to-toe, shuddering). A woman in a crowd throws an unopened can of soda to hit a man in the forehead and laughs; the man falls, grabs his head, and wears a white headband spotted with blood for several days afterward.
► A woman wearing a trench coat stands on a stage, removes the coat to show a bra made of two large gloves (a little cleavage is seen) and another glove covering her genitals, with the middle finger pointed up; an audience throws cells phones and balloons of goat's blood at her, covering her in blood and scratches as she recites some literature.
► Several TV commercials show the employees of a large company living in cells of four people each, wear prison overalls and eat from prison trays; we hear that they are unpaid, work 14 hours a day and that the CEO is rich from selling slave labor globally. An area in a city is filled with tents, garbage bags spilling trash onto pavements, and unreadable graffiti on walls. A man and a woman live in a dilapidated garage. A man shows cellphone video from a washroom scene where horse-human hybrids are seen on several TV stations to encourage workers to fight slavery. A man begins to transform into a horse-human hybrid, his nostrils becoming oversized and his girlfriend looks frightened. We see a man transforming into a horse-human hybrid in a Claymation video.
► Two men argue. A man and a woman argue several times. In Claymation, a caveman hits another caveman on the head with a coconut. In a call center, two managers shout, stomp, and curse at employees who refuse to make calls. An elderly woman cries on the phone about her husband's stage-four cancer. A woman makes earrings out of words: Murder-Murder-Murder and Kill-Kill-Kill and she also has a set that are images of a man strapped into an electric chair. 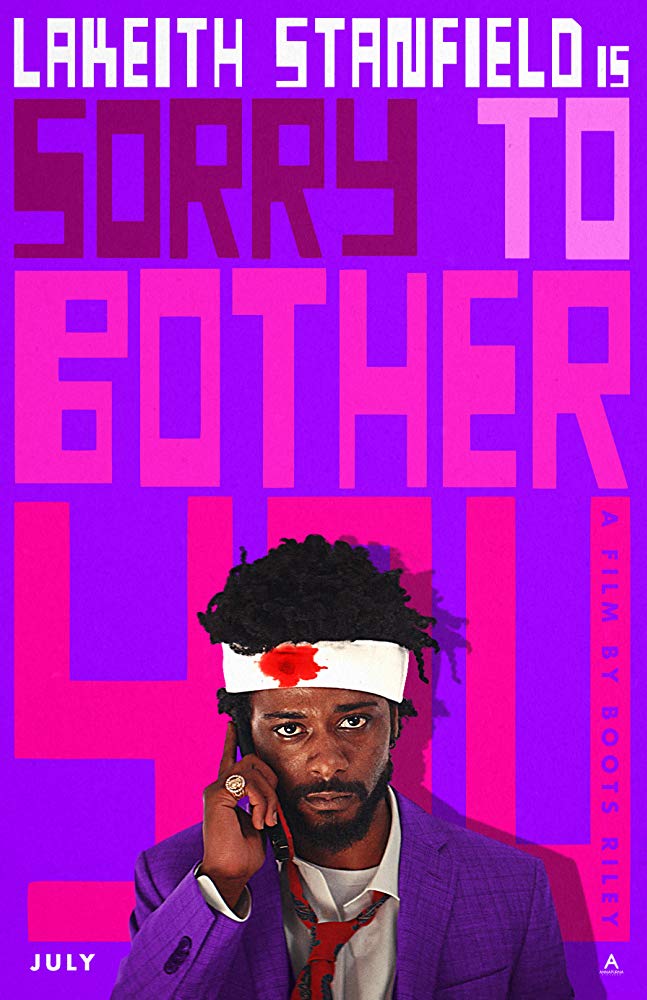