Remake of the eponymous 1972 thriller, with Michael Caine assuming the role of the famous middle-aged detective novelist who begins a two-man battle of wits with an unemployed actor (Jude Law). The younger man is having an affair with his wife, and the cat and mouse game between the two men eventually devolves into violence. Also with Harold Pinter. Directed by Kenneth Branagh. [1:26]

SEX/NUDITY 5 - A man answers his cell phone and proceeds to participate in telephone sex by making references to kissing and tasting one's mouth, and stating that, "Everybody likes my body. I've always been attracted to rich and powerful men."
► A man lies on a bed, an older man sits beside him and strokes his hair, and the younger man becomes enraged and moves away, yelling obscenities; he then goes to a walk-in closet where he dons a red-lined black woman's coat, comes back, leans over the older man, says, "Goodbye, Darling" and turns away.
► A younger man calls an older man a "naughty tempter," plays with the belt of a robe the older man is wearing over trousers (we see no flesh), lays his head on the older man's chest and pats his chest with one hand.
► A woman appears in a full-length photograph wearing a sleeveless white gown with a plunging neckline that shows bare arms and substantial cleavage (the camera focuses first on her cleavage in a close shot).
► A man walks to a bed that looks to be covered in leather and touches it, asking an older man, "Is this where you lost your virginity? Is this where your wife devoured you?"
► A man holding an older man at gunpoint dresses him in jewels, including a necklace, earrings, and bracelets and then forces the older man to look at himself in a mirror.
► An older man asks a younger man to live with him and be his companion (homosexuality is implied) and the younger man asks, "Do you fancy me?" An older man tells a police inspector that he found a younger man attractive, and the inspector repeats these words with emphasis, implying a homosexual relationship.
► Two men have several conversations about the older man's wife, who has left him to move to London to live with the younger man: they discuss which of them is better in bed, how often the younger man has sex with her and whether she loves either one of them. An older man tells a younger man facetiously, "Your car is the smaller one. Mine's bigger," insinuating a sexual comparison.
► An actor states that he hates women, and would rather "...do it with a goat or a dog or a boy. There was this boy once; I called him Dolores..." A man says that as an actor he plays killers, sex maniacs, and perverts.
► A police inspector states that he questioned a man's wife and found her "tasty" and that, "she has wonderful legs." An older man tells a police inspector that a younger man is probably in London, cuddling his wife. A man implies that his wife is having sex with numerous partners, stating that she has many male "friends." An older man states that marriage is old-fashioned and that he has a mistress. An older man says that his wife is an adulteress and should be stoned to death.

VIOLENCE/GORE 5 - A man pulls a gun and shoots another man through the chest (no blood is seen), and the man is thrown back into an elevator and collapses to the floor.
► A man is shot in the chest, he collapses, but we see no blood and the scene ends.
► An older man holds a large knife to the throat of a younger man, whom he has put into a headlock; then he pulls a gun off screen, fires two shots into a wall, and then forces him to steal jewelry and stand on a bed.
► Two men argue and struggle in an elevator, and they then fight with punching and kicking.
► A man falls off a ladder leaning against a wall, he catches himself on the ledge of the roof, he falls again, this time onto the skylight, and then smashes the glass with a hammer; he eventually drops hard onto the floor and says, "I thought I was going to die."
► A man with a gun threatens another man, he shoots and breaks a mirror, then breaks a bar glass by smacking it across the room with an empty vodka bottle, and shoots an aquarium full of fish. A man enters a room, smashes paintings and kicks a chest of drawers.
► A man holding an older man at gunpoint dresses him in jewels, including a necklace, earrings, and bracelets and then forces the older man to look at himself in a mirror.
► A man becomes enraged, yells obscenities and moves away from an older man who is stroking his hair.
► An older man states that his wife is an adulteress and should be stoned to death. A police inspector says, "I catch sex criminals, perverts. I generally cut their balls off." A man says that as an actor he plays killers, sex maniacs, and perverts.
► Two men find a small spot of blood (we learn later that it is pig's blood).
► A driver speeds down dark narrow roads, driving frantically.

SUBSTANCE USE - A man drinks straight from a vodka bottle then pours the rest of the alcohol from the bottle over his face to remove stage makeup, two men drink alcohol (wine or whiskey) several times throughout the film, a man drinks a glass of wine, a police detective smokes a cigarette and drinks two bottles of beer, and in a house there are several side tables with open wine and liquor bottles and empty or half-full drink glasses.

MESSAGE - Some men will go to any lengths to win an argument. 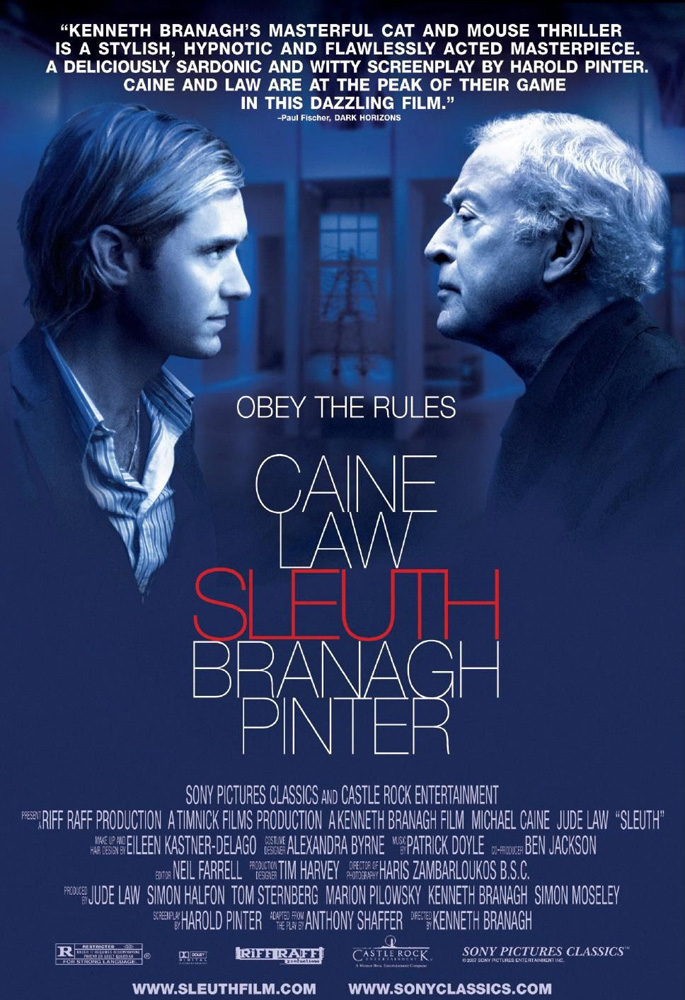