A twenty-something woman (Elizabeth Olsen) visits her family's abandoned lake house with her father (Adam Trese) in order to prepare it for sale. Dark and eerie, the house is home to strange events, apparitions, and secrets. Sealed into the shadowy house alone, she faces unexpected enemies in terror. Also with Eric Sheffer Stevens, Julia Taylor Ross and Haley Murphy. Directed by Chris Kentis & Laura Lau. [1:28]

SEX/NUDITY 4 - A woman cries and grimaces with a memory suggestive of incestuous rape, chanting, "Don't Daddy. Stop! It hurts, it hurts!"; the woman's father is tied to a chair, she straddles his lap and imitates his voice saying, "It's just a game. Wouldn't want to wake Mommy" while another man in the room says, "I should have stopped it."
► Throughout the film, a twenty-something woman wears a thin, scoop-necked tank top that reveals moderate cleavage and she bends forward several times, revealing a lot of cleavage, except for nipples.
► In a bathroom, a woman sees herself as a child in a bathtub of water, playing with empty glass beverage bottles as the water turns red with blood (we see her bare back, arms, knees and feet).
► A father tells his adult daughter that a former boyfriend of hers is posting on her Facebook wall, wanting to get back with her; the dad says he does not think it is a good idea.
► Four snapshots turn up several times, implied to show incestuous child abuse: we do not see them, but a man calls them garbage and puts them in his pocket, later, we see many snapshots that reveal a little girl's bare leg, knee and thigh with a pink fairy skirt pulled up, or two bare thighs with the skirt bunched above them, or one bare arm and shoulder. In a flashback, a woman under a pool table remembers two men sitting her on the edge of the table as a little girl and snapping photos of her.

VIOLENCE/GORE 6 - A woman picks up a sledgehammer and beats a man with it (his body is off screen); she throws the sledgehammer down by another man's side and walks out of the house as we see him bleeding from his wounds.
► We see a man lying on a bedroom floor with the side of his forehead, eye and face covered in blood and there's blood on his wrist. A woman bends over an injured man and cries, getting blood on her top, sweater and face, and wiping blood on her skirt and tights; later, the body is gone and a large bloodstain remains. A man lies on the floor, and his abdomen is covered in blood; the injured man points garden shears at another man and shouts at him and the first man kicks him and shouts. The camera pans over the chest and legs of a man as a large pool of blood flows out from beneath the body.
► In a kitchen, a woman slashes another woman with a pair of garden shears, and the second woman tells the first woman to kill a man when blood appears on the second woman's palm and she vanishes; blood appears on the first woman's hand and she sees a man tied up in a chair and gagged with duct tape and cuts him loose, he stands up and slaps her hard in the face, knocking her to the floor, and then removes his belt and beats her several times (we see no injury).
► Hiding under a bed after hearing a crash in an empty house, a woman sees a little girl lying beside the bed on the floor, the girl is dragged off screen by her feet, grasped by unseen hands, and then a man's body is dragged out of the room, and the woman follows with a handgun and encounters a man, whom she shoots twice and then runs to barricade herself in a bedroom (we do not see his face or wounds); when she comes out of the bedroom there is no man to be seen but she sees blood in another bedroom, in a bathtub and in a toilet hanging on a wall and a sledgehammer comes through the bathroom wall (she screams and run downstairs). In a bedroom, a spot of blood appears on the sheet of a rumpled bed and expands to cover most of the bed. A toilet bowl hangs on the wall next to the tub; a trickle of blood flows from it and becomes a gush that covers the wall to the floor.
► Throughout the film, a woman is agitated by a creaking old house that has no electricity, telephone or cell phone reception; the house is dirty, covered in cobwebs, has all its windows boarded up, all the doors are locked and the woman is sealed inside, and she struggles to remove plywood from windows, she hears unexpected footsteps on an upper floor, crashes occurring throughout the house, slamming doors, someone running, heavy objects being dragged and scraped across floors and a number of moans. A woman in a scary house sees apparitions that include a shadowy man following her, two bandaged and charred mummies, the ghost of a little girl, and a man dressed in a bodysuit and hand and face coverings rushing at her and reaching for her throat; several times, she turns slowly and sees a man's hand or arm reaching for her and she screams, running through the house, sometimes in complete darkness. A woman sees a shadowy figure at the back of the car she is in, she screams, gets out of the car and runs inside a house where she and a man search all the rooms while hearing running and crashing.
► A woman's father disappears in an old house and she looks for him while crying, shaking and screaming. A woman takes a battery operated lantern and flashlight and searches her old house for a man she thinks is following her (we see his legs in jeans and boots and walking around the first floor and basement) and he nearly catches her in the basement.
► A woman finds a key that unlocks a cellar door, she runs out of the cellar and keeps running until she gets to the road where she gets into a car with her uncle; they argue while he wraps her wrist, which we see is bleeding.

SUBSTANCE USE - A woman drinks from a bottle of beer and we see an open bottle of whiskey on a table, a kitchen counter is covered with full and empty beer bottles, a woman hands a short glass of whiskey to another woman and the second woman pours a bottle of beer down a man's throat as he sits in a chair with his hand duct taped behind him, and a little girl plays with empty beer bottles in a bathtub of water and blood.

MESSAGE - An abused child can be psychologically injured for life. 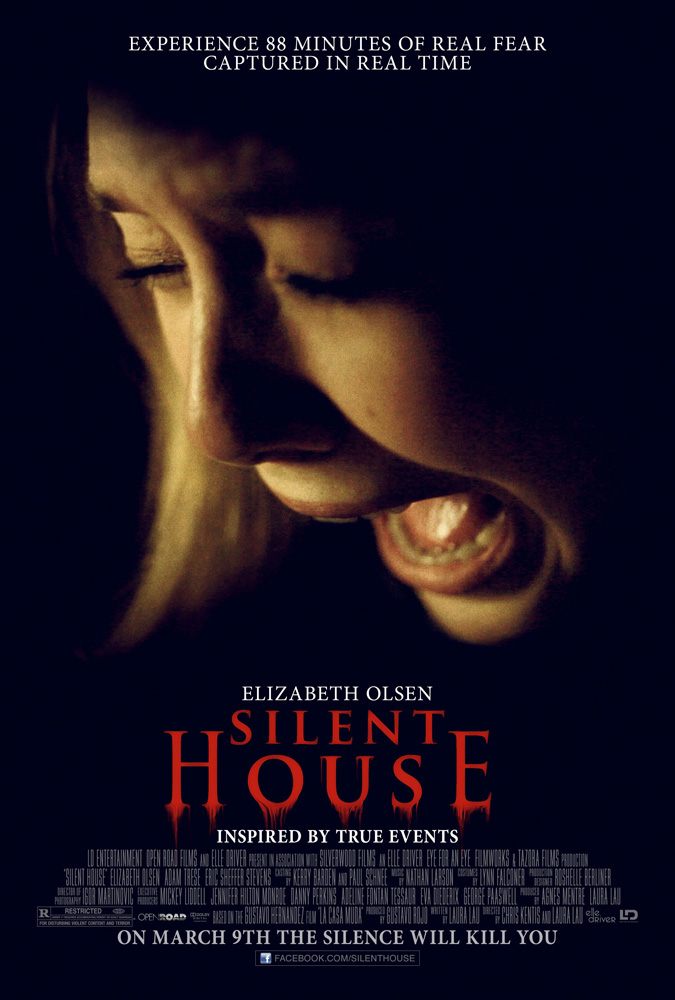