When an average guy (Jay Baruchel) begins a relationship with a beautiful and popular woman (Alice Eve), his lack of confidence, as well as the negative influence of his friends and family, lead to the end of the relationship -- or perhaps not. Also with Debra Jo Rupp, Krysten Ritter and Lindsay Sloane. Directed by Jim Field Smith. [1:44]

SEX/NUDITY 7 - A man and a woman kiss passionately, the woman straddles the man's lap and begins to thrust against him (they are both fully clothed) and the man ejaculates, unbeknownst to the woman; a large stain is seen on the man's pants, and a dog rushes over to the man and begins to lick the stain, causing the man to run out of the room.
► A man and a woman kiss passionately and begin to undress themselves (the man is shown wearing boxer-style underpants and the woman is in her bra and underpants), they lie on a bed, kissing, the woman places her hand down the man's boxers and they begin to discuss his man's genitals; they then stop kissing, the man stands up and dresses and the woman wraps a robe around herself.
► The bare buttocks and chest of a man are seen while he trims his pubic hair, and he screams in pain as he details what he is doing to another man, who is not in the room.
► A man is seen kneeling in front of a presumably completely nude man (we only see the bare back of his upper legs), using a beard trimmer to trim the man's pubic hair; we see tufts of hair fall to the ground, as well as some blowing fanning of the man's genitals to make more hair fall. A man pulls down his pants in front of a group of other men (we see the bare calves) and instructs the men to look at his pubic hair, which he then discusses at length while the men joke about not looking at his genitals.
► A few men discuss a man's premature ejaculation at length, using crude and mocking terms. Two men discuss the genital size of one of the men, as well as how "straight" it was that the man was assisting another man in trimming his pubic hair. A man talks to a woman about his sexual experience, using crude language, as well as crude hand gestures. Men joke, using crude language, that a man needs to lie about his sexual experiences to a woman. Men discuss a woman being sexually interested in a man on multiple occasions, including mentioning that the woman would not have intercourse with the man. Men use crude language while discussing a man having intercourse with a woman. A man jokes that he would have intercourse with a man. People discuss, at length, that a woman is not wearing underwear, including asking her repeatedly to verify that she is really not wearing any. Men openly discuss the sexual promiscuity of a woman, using crude terms. A woman teases another woman, saying that she was going to have intercourse with a man later and the woman agrees. A man asks a woman if she has "piercings" and he uses hand gestures to point to his chest and genitals.
► Women are seen wearing cleavage revealing tops, as well as bikini-style bathing suits. A woman wears a brightly colored bra under a sheer top. A man's bare chest and back are visible when he climbs out of pool wearing brief-style underpants.
► Men and women kiss in a few scenes. Women kiss women and men on the cheek in a friendly fashion. A woman dances close to a man. Men ogle a woman.

VIOLENCE/GORE 4 - Men hit one another with hockey pucks during a game; one man is struck in the genitals, which causes him obvious pain. Men shove one another while shouting angrily and have to be pulled apart. During a sporting event, men are seen slamming into one another, as well as into the glass surrounding an ice rink, and punching one another during a short fight. A man slams another man in the head with a ball.
► A man hits a woman in the head with a shirt, the woman begins to chase him as he runs through a crowded airport, she slams into a person and falls down, then gets back up and clotheslines the man, sending him to the floor; he jumps up and she follows him onto the back of a golf cart, where he slaps the woman in the face with a bag, sending her flying off the cart, which drives through a store's display.
► A man shouts angrily at another man, rips off the man's clip-on tie and has to be dragged off an airplane as he loudly protests and struggles (he is later seen unharmed). A man jumps on top of another man sitting on a sofa and attempts to wrestle with him, but quickly jumps off. People shove one another in a joking fashion.
► People shout at one another throughout the film. A man jokes that he would smash a cake with a woman's face on it. A woman makes crude remarks, including that a man looks like someone in a coma and that a man who admits to urinating on himself as a child needs "rubber underwear."
► It is implied that a man takes a large wrench and breaks a part of an airplane.

SUBSTANCE USE - People drink alcohol in a bar setting, a sports game, and at dinner, and a man jokes that another man, "Isn't my sponsor" when he asks for a drink.

MESSAGE - Self-confidence is a most important thing as we go through life. 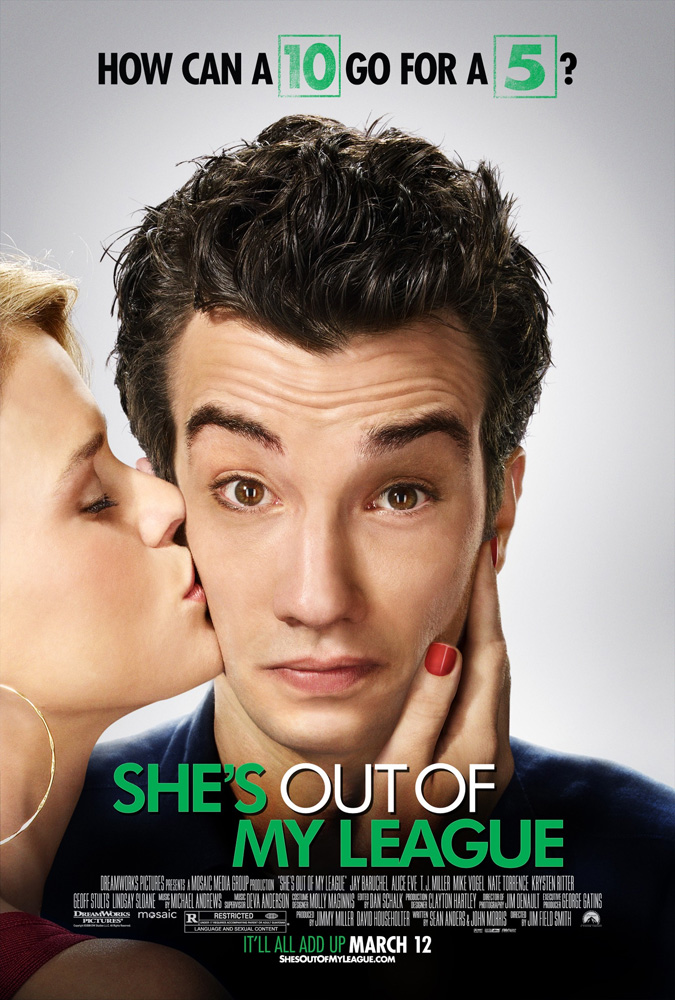