Why is “She Dies Tomorrow” rated R? The MPAA rating has been assigned for “language, some sexual references, drug use and bloody images.” The Kids-In-Mind.com evaluation includes a couple of kissing scenes, discussions of dolphins having sex, and several cleavage revealing outfits; a dead body with blood around the room, a bloody abdominal wound, many discussions of dying and people knowing that they are going to die and their reactions to that knowledge; and at least 23 F-words and other strong language. Read our parents’ guide below for details on sexual content, violence & strong language. When a woman (Kate Lyn Sheil) tells her sister (Jane Adams) that she is going to die the next day, it sets off a series of events that convince a number of people that they will also die the next day. Also with Kentucker Audley, Katie Aselton, Chris Messina, Tunde Adebimpe, Jennifer Kim, Olivia Taylor Dudley, Michelle Rodriguez and Josh Lucas. Directed by Amy Seimetz. [Running Time: 1:24]

– A man asks a woman, “You wanna make out,” and she says, “OK,” and they kiss then stop abruptly. A man and woman lie in bed together (both are clothed) and talk; he cradles her head and caresses her hair tenderly. A man and woman are in a hot tub kiss and he is shown bare-chested and she wears a cleavage-revealing bikini top. A woman in a doctor’s exam room tells him, “You’re so good-looking,” and when the doctor leans over her she seems to think he is going to kiss her; they embrace briefly while she tries to comfort him.
► A woman calls out to her husband, “Get me a stripper” (for her birthday). A woman talks at length about the sexual practices of dolphins, including sex with baby dolphins and rape.
► A woman changes clothes and we see her bare shoulders and partial cleavage. A woman wearing a crop top lies on a floor and we see cleavage and her bare abdomen.

– We see furniture overturned in a house with some blood splatter, blood is smeared on a wall or appliance in the background and the camera pans to show a dead body on the floor, partially off-screen. A woman with a bloody abdominal wound enters a house and stands over another woman lying on the floor (blood drips on the other woman’s bare abdomen).
► A woman with a bloody abdominal wound wades into a swimming pool and we see a trail of blood in the water. We see a bloody slash on a woman’s wrist and it is later shown bandaged with some blood seeping through (she broke a glass pane to get into a house). We see a bloody handprint on a computer screen.
► A man visits his father in a hospital bed and removes his oxygen as a woman with him unplugs his IV; the monitors beep and the man dies as the first man says, “I should have done this for him a long time ago,” and the woman says, “I was waiting for him to die to break up with you.” A man throws things around a room and we hear glass shatter as he mutters and yells, “It’s over,” and “There’s no tomorrow.” A woman hears a voice and seems frightened; she grabs her car keys, leaves the house with the door open and drives away. A woman tells her pre-teen daughter that she and the girl’s father are going to die the next day; we then hear the child screaming in the background, presumably fearing that she will die the next day also. A woman drops a dish breaking it and walks out of the room saying that she is hearing a voice; she walks toward another woman who yells at her to get away from her. A woman in a doctor’s exam room tells him that she is going to die tomorrow and that she senses when something bad is going to happen; she describes a few violent acts (including home invasion, rape and murder) and the doctor is overcome by something and leans over the exam table and lies down moaning, and she tries to comfort him until he leaves the room and tells her to go. A woman rents a dune buggy and drives in the dark: a man tells her that she has to wear a helmet because if she hits something the vehicle could flip over.
► A woman wakes in a start, gasping deeply in a few scenes after remembering past events. A woman says, “I’m going to die tomorrow,” and says so repeatedly to another woman as she repeats, “No you’re not.” A woman yells at another woman about what she is doing when she comes to her house and is preoccupied with dying. Several people individually repeat, “I’m going to die tomorrow.” A woman considers having herself made into a leather jacket after she dies and talks to another woman about a man that works with leather; she says, “I want to be useful in death.” A woman calls another woman on the phone and asks her to come over; the other woman complains that she has to go somewhere else. A woman talks to another woman about “relapsing” and says, “You’re loaded.” A woman tells another woman, “You’re not thinking straight.” A man says that he regrets not going to Majorca, and staying to win over an ex-girlfriend. A woman tells a man that she terminated a pregnancy when she was younger. A woman asks, “Are we already dead?” when the lights in a house are turned off. A man says, “We all have to die at some point, why not tomorrow?” A man asks a woman, “Do you feel different after what we did?” A woman talks about wasting 6 months of her life in a relationship that was going nowhere.
► A man answers the door and returns slowly with a pizza box; he seems upset by something, but does not offer an explanation. Several people hear voices and sounds after they have been overcome with the sense that they are going to die and when they follow the sounds, we see flashing colorful lights. A woman lies on a floor and seems distraught; she climbs a hillside outside and grips branches, holds handfuls of dirt and leaves, and looks frustrated. A woman breaks into another woman’s house (we see glass on the floor) looking for the woman and she calls her on the phone repeatedly, leaving her desperate messages. A woman scrolls through pages of cremation urns on her computer. A woman drinks from bottles of wine while driving.
► A close-up shows a woman’s eye with her mascara smudged and tears streaming. We see an unidentified fluid flowing on the screen with bubbles and flecks in it in a few scenes. A woman turns on a bug zapping light and we hear it zap and flash. A woman puts an unidentified substance on a glass slide and looks at it through a microscope; she seems to see something move and she snaps a picture. A woman says that she thinks that she just got her period and laughs when she thinks about it being her last period. A man describes how a skin needs to be brought to him if he is going to make a leather jacket out of it; it can’t be rotting, ideally it should still be warm and he would need to hang it in the sun to dry.

She Dies Tomorrow SUBSTANCE USE

– A woman talks about dolphins bumping into puffer fish on purpose to get high, a man tells a woman that he eats a bunch of mushrooms and she says that she would have some with him, a man and woman talk about whether they feel different after taking mushrooms, and a woman smokes from a bong (presumably marijuana). A woman drinks a glass of wine, a woman drinks from a bottle of wine while driving and she opens another bottle when she finishes one, a woman lies on a floor and another woman reprimands her for being “loaded,” a man drinks wine in a hot tub and asks a woman if it’s OK if he has more and she tells him it’s fine but that she does not drink alcohol, and several people in a home drink glasses of wine.

– Knowing that you are dying can cause unusual behavior. 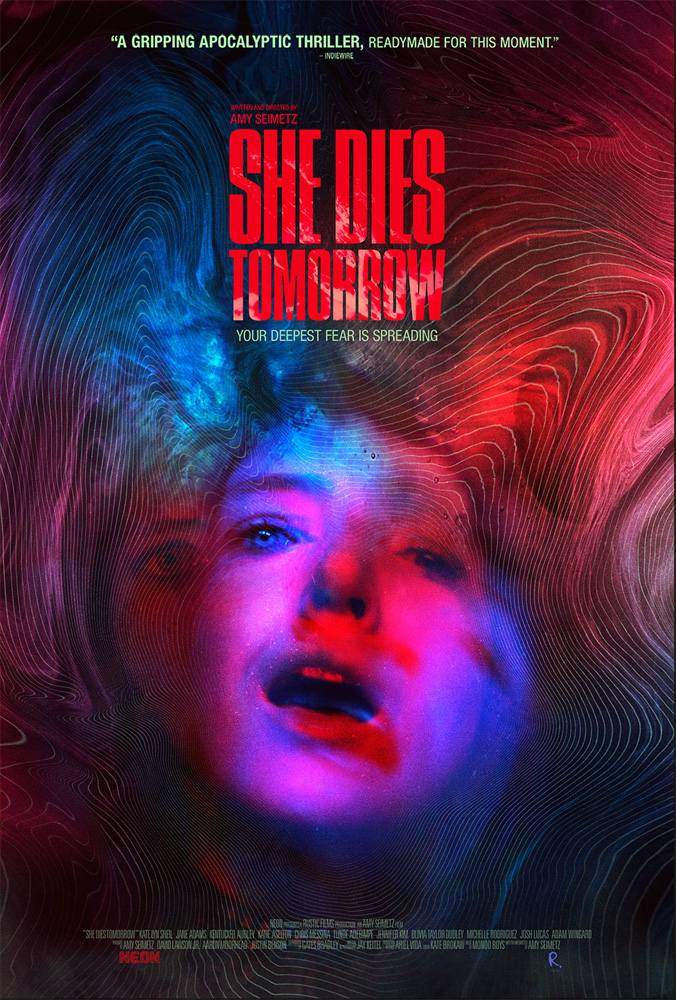