Animated film with Will Smith as the voice of Oscar, a fish with dreams of making it big and moving to the "top of the reef." He stumbles upon his opportunity when a shark is accidentally killed and Oscar takes credit for the act and is dubbed "the shark slayer." He befriends a vegetarian shark (Jack Black) who helps him perpetuate his new persona, but he learns fairly quickly that fame and fortune come with a price and lying will get you nowhere. Also with Robert De Niro, Jack Black, Martin Scorsese, Angelina Jolie and Renée Zellweger. Directed by Rob Letterman, Bibo Bergeron & Vicky Jenson. [1:30]

SEX/NUDITY 2 - A lady fish and a man fish kiss in a few scenes. A lady fish speaks with a sultry voice, slinks and sways as she swims, and a man fish admires her. A lady fish tries to persuade a man fish to be her boyfriend. A fish admires three turtles that dance while polishing a whale. A sketch of a human woman hangs on a wall and she wears a clingy, low-cut dress that reveals cleavage and bare shoulders. A male fish says to a female fish that she needs to "get her freak on." A song's lyrics are: "I like big butts..."

VIOLENCE/GORE 3 - A shark charges toward a fish, the shark slams into a porthole and gets stuck, a group of shrimp attack the shark's face, and the shark breaks through the porthole and continues chasing the fish. A shark chases a fish through a whale wash (similar to a car wash) and the shark is trapped in the scrubbers. A shark baring his teeth moves fast toward a fish that tries to get away (screaming the whole way), and the shark is stopped when he strikes an anchor (we see the shark die and his brother cries and yells). A fish is fish-napped and held in exchange for another fish turning himself over to the fish-nappers. Two jellyfish zap other fish periodically; one fish is zapped repeatedly while he is bound with seaweed, as a form of torture (we see the fish's skeleton with each zap), and one fish is zapped in the eye (we see the eye bruised and swollen). Sharks approach a reef, and fish swim in panic and scream. A sharks swoops toward a tray and scoops up a fish in its mouth. A fish grabs another fish by the tail and slams him into a plate glass window several times, while in a jealous rage. A fish charges toward a shark, punches him and the shark is thrown through a billboard; the shark is then spun by the tail, thrown into a lighted sign (sparks fly) and he falls into the murky depths screaming. A worm on a hook (it's tied to it) is tossed into the ocean, a shark comes upon it and the worm panics and faints. A fish scares an octopus and makes him release its ink, and a fish scares a killer whale and it faints. We see a shark's funeral: a coffin is tipped and empties the shark's remains, which are wrapped in cloth. A shark threatens a blowfish, and the blowfish puffs up. Piranhas bare their teeth and we hear gnashing when food is thrown into their tank. A shark vomits and spits out a license plate, some seaweed and a fish (it's alive and well). A seahorse knocks himself out with its tail and tumbles to the ground. Two fish argue in several scenes. A fish says of another fish, "he's dead meat." A whale thrashes when it gets soap in its eye, and it is held by clamps while a fish squeegees its eye. Sharks smack each other in the head throughout the movie. A fish in a sushi bar holds a large cleaver in its fin. Fish scrub the goo and slime off a whale's tongue using brooms. Electric eels zap the barnacles off the belly of a whale. A shark flatulates and another shark faints from the smell.

LANGUAGE 1 - 3 mild anatomical terms, a fish says "who in the halibut?"

SUBSTANCE USE - Fish are seen smoking and drinking what is apparently alcohol.

MESSAGE - The truth will set you free. We must love and accept each other for who we are. 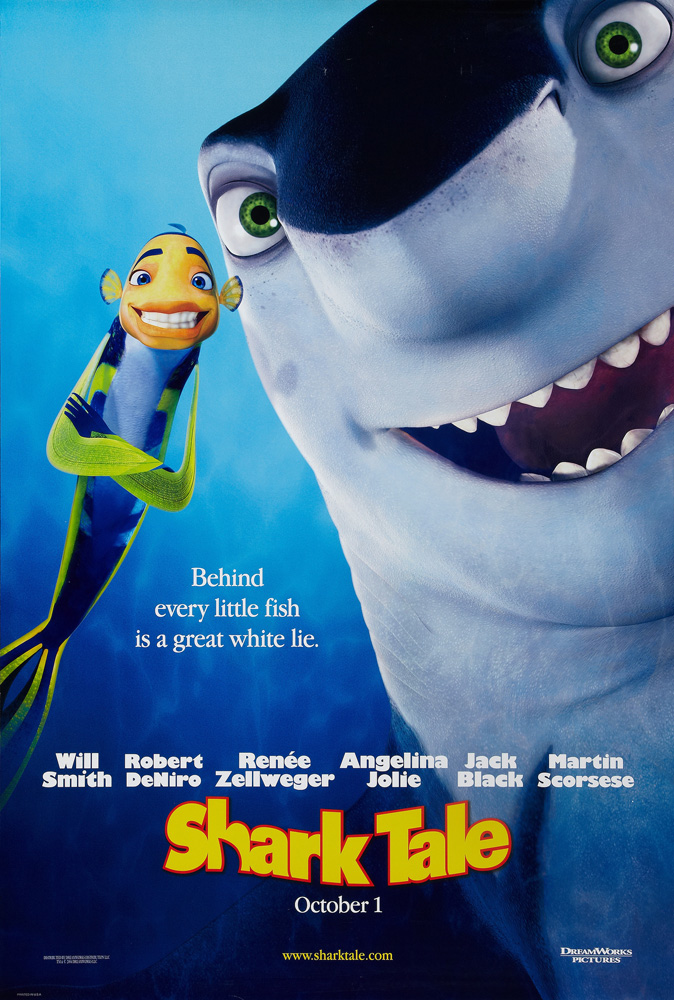